Ajinkya Rahane's professional summary reads a class-apart batsman and an extraordinary slip-fielder, more so than his mentor Rahul Dravid.

Ajinkya Rahane‘s slip-catching is baffling, very baffling. His resume features a world record most catches (8) by any cricketer in a match. The professional summary reads a class-apart batsman and an extraordinary slip-fielder, more so than his mentor Rahul Dravid. And with every series, the number in the catches column scales up. But the professional summary remains the same, for he will have to write theses on the mechanism of the every catch he takes. One-handed blinders, low catches, high-jump rippers: he has been there, aced that. And he repeats his feats, like Virat Kohli‘s run-fest or Ravichandran Ashwin’s wicket-taking extravaganza. Full Cricket Scorecard: India vs England 3rd Test at Mohali

“Rahane makes no mistake,” Ravi Shastri says in the commentary box, every time the Mumbaikar pouches one. It has become a template, like the Shastri clich . But Rahane has his share of blunders as well. He had dropped Martin Guptill in the Indore Test against New Zealand, and then dropped Alastair Cook in the Rajkot Test against England. Of course, these should not have been dropped by his standards. However, even the greatest falter at times. Rahane is mere mortal. Mark Taylor, Mohammad Azharuddin, Mark Waugh: even the greatest had faltered. But like them, Rahane keeps pulling off a catch that leaves us startled.

England were 107 for 6, with Joe Root still at the crease. To make it more interesting, the injured Haseeb Hameed joined Root in the middle.

No doubt India were in driver’s seat, but the duo’s blockathon had got under India’s nerves. Time ran slow and the run-rate even slower, making Indian fielders impatient.

The pitch had enough for the spinners. Kohli kept Ravindra Jadeja into the attack, given there were two right-handers in the middle.

Many deliveries went past the outside edge into Pathiv Patel’s gloves, with Rahane’s eyes fixed on the ball at first-slip. He anticipated the ball to fly to him at any point of time. There was turn, sharp turn. As a result, few balls went acutely off Rahane, forcing him to make a trigger movement to his right.

66.1 – Length ball on middle-and-leg. Root nicely defends it back to Jadeja.

So far, Jadeja had not spun it away. He was setting Root up. Rahane was calmly watching the battle at first-slip. He gets ready for the third ball. He stoops low, balances himself, arches his back, straightens his neck, positions his hands and gets back to his business. For that matter, he repeats these dynamics in every match every match in which India play spinners.

Rahane has failed terribly with the bat this series, but that still doesn’t affect his fielding. Enough said.

66.3 – Jadeja pitches it, drawing Root forward. He tries to push it but edges it to the left of Rahane. Here’s the video:

Look at Parthiv’s reaction. The ball takes off the surface and kisses Root’s outside edge. Parthiv stands up and tries to get his gloves in the line of deflection. But the ball travels past him before he could even glove it.

All this drama to finally describe Rahane’s brilliance.

Rahane, if watched closely, is standing a little wide of the first-slip, facing somewhere between mid-on and mid-wicket region. That way he can easily move to both his sides at the last moment.

Rahane only had a fraction of a second to read the deflection, at the same time judging Parthiv’s movements.

And as the ball goes past Parthiv, Rahane, stooping low to his left, takes a one-handed catch hanging on his left leg, balances himself, takes it cleanly, and stands tall like a boss. No doubt Kohli was compelled to give his deputy a brotherly hug. 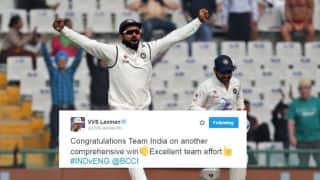 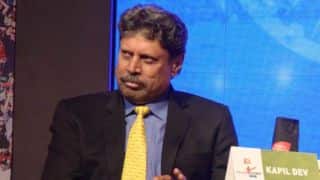