The 307 run association between Alan Kippax and Hal Hooker sits proudly at the top of the list of 13 partnerships of 200 or more for the tenth wicket in First-Class cricket history till date.

Heroism is not only in the man, but in the occasion . Calvin Coolidge

The news spread like wild fire and was reported from far-flung places on the globe, as follows:

New Cricket Record Melbourne, Australia, Dec, 29. A new world’s record in First-Class cricket for a last-wicket partnership was set up here to-day by A. Kippax and H. Hooker, playing for New South Wales against Victoria in a Sheffield Shield match. The pair scored 307 runs. Kippax compiled 260, not out, and H. Hooker, 62.

KIPPAX’S HUGE SCORE.Last Wicket Record.Reuter’s Service. Melbourne. Dec. 27. Playing for New South Wales against Victoria in the Sheffield Shield, A. Kippax scored 260 not out and H. Hooker 62. This partnership for the last wicket brought 307 runs, a world’s record in First-Class cricket.

Here is an extract from The Brisbane Courier of Thursday, December 27, 1928, under the headline GREAT BATTING

Kippax (260 not out) and Hooker (62) received a great ovation at the end of a world s record last wicket partnership of 307 at the Melbourne Cricket Ground yesterday. They had carried New South Wales total from nine for 113 to 420, a lead of 44 runs from Victoria in the first innings

Very obviously then, something really momentous must have taken place in the Sheffield Shield match between the traditional rivals, the Australian equivalents of the Roses counties.

Let us pause at this stage to consider the issue of Yule tide cricket played in Australia from 1919-20 to 1929-30. The situation appears to be something like this:

While First-Class cricket was not a regular feature of Christmas Day in this particular decade of Australian cricket, exceptions had been made, and there were four matches where cricket had actually been played on Christmas Day in the decade after The Great War.

There were 12 games played for the Sheffield Shield in 1928-29. We are primarily interested in the clash at Melbourne between Victoria and New South Wales (NSW) that began on the Saturday, December 22, 1928. There was a rest day on the Sunday, but the match included play on Christmas Day.

Jack Ryder won the toss and Victoria batted first. It was not a very auspicious beginning; the both openers fell at 21 and the third at 29. The skipper then crafted a masterclass of batting with a polished innings of 175, sharing a sixth-wicket stand of 176 runs with Ted a Beckett (113). A Beckett was the seventh man out, at 348, and the innings ended at 376 on Day Two. For the visitors, Hal Hooker, who was soon to play an absolutely stellar role, took 3 for 100.

It was a sorry Christmas eve for NSW and they ended up eating humble pie at stumps of Day Two, with the score reading a dismal 58 for 7 at the fall of Hammy Love, with only skipper Kippax, like Horatio, manning the bridge, undefeated on 1.

Then it was Christmas Day with the traditional festivities and bonhomie in the air, and images of a corpulent Santa Claus, attired in red, ringing his bell with a merry Ho! Ho! Ho! and little children listening wide-eyed to stories of Rudolph, the red-nosed reindeer. There were the prospects of the traditional Christmas goose and pudding and cake in the air as an estimated 5,000 spectators filed in to the ground after morning devotions.

One s mind goes a long way back to one s schooldays and to a hymn that one had heard as a child that went something like this:

Trust in the Lord

He is a friend so true

He will see you through .

The theme may have been going on in the skipper s mind as he made his sombre way to the middle with Charles Nicholls, the tall right-arm fast-medium bowler who was not exactly a bunny with the bat, having a First-Class century to his credit. Nicholls, however, was eighth man out at the total of 74, having scored 10. The ninth man out was Sam Everett at 113, having scored a very commendable (under the circumstances) 20. At this point, NSW were still 263 runs in arrears. The Victorians had, perhaps, already begun to dream of a sumptuous Christmas dinner.

Be still my heart; thou hast known worse than this the immortal Homeric assurance may have been going through the mind of the beleaguered NSW skipper, then batting on 20, and facing the almost certain prospect of a follow-on. Divine deliverance was to come from an unexpected quarter. The 6 2 Hooker, the No. 11 man, who was not known for his batting skills indeed, his previous best had been a modest 28 strode to the wicket with his jaw set, and a determined look in his eyes.

There is a story, apocryphal perhaps, that when Hooker had arrived at the crease, the loquacious Victorian wicketkeeper Jack Ellis had made the somewhat facetious remark, Have a go, Hal, the bowling s easy. It would take him a lifetime to live that remark down.

The atmosphere at the stadium gradually began to undergo a slow change and Christmas Day of 1928 then began to bathe in an other-world glow, as unexpected as it was magnificent. By lunch, following the exhortation of the opposing keeper, Hal had made his way to 18 personal runs. Lunch was taken at 170 for 9.

It is reported that in the period between lunch and tea of Day Three, Hooker enhanced his individual score by only 4 against an attack comprising a Beckett, Hans Ebeling, Bert Ironmonger and Stork Hendry. He faced much more of the bowling than his more accomplished batting partner during this time, an estimated 4.8 balls per over to Kippax s 3.2. Hooker endured the tension like the Rock of Gibraltar with an air of insouciance, untroubled by the tactics of the Victoria skipper in having numerous men breathing down his neck all around the wicket.

As news of the fightback spread, more and more spectators thronged the ground, reaching an estimated 15,000 in total. They were in for a rare treat. Kippax went on in his impeccable and unflappable style, Hooker giving him admirable support. Against the run of play and much to the chagrin of the Victorians, NSW closed Day Three, Christmas Day, on 367 for 9, having added 254 for the last wicket, and placing the team in the intriguing position of being within 10 runs of securing a first-innings lead. Skipper Kippax ended the day batting on 221 and Hooker was undefeated on 51. The joy of the season was finally catching up with NSW.

On Boxing Day, there were 10,323 spectators populating the stands (as reported) before the first ball of the day was bowled, all with an eager anticipation of something miraculous about to happen.

Here is a reconstruction of the events of Boxing Day from contemporary media reports:

First over of Boxing Day

Ball 1 Ebeling to Kippax, keeps low, whizzes past the stumps to the keeper

Ball 2 Ebeling to Kippax, steered through the off-field for 3 runs

Ball 7 Ironmonger to Kippax, single from a tickle to the leg

Ball 5 – Ebeling to Kippax, beautifully turned to the leg-side fence

Ball 6 Ebeling to Kippax, a single, and the first-innings scores are tied

Ball 7 Ebeling to Hooker, played back

Ball 8 – Ebeling to Hooker, played back

Ironmonger to Kippax, one run, and NSW are ahead. The applause is deafening. Hooker, restraint personified, plays only 4 balls till the lead is achieved.

When the NSW total reached 389, a Beckett replaced Ebeling in the attack. It was Hal Hooker who brought up the 400 of the innings in 439 minutes with a drive for four. A no-ball by Ironmonger was swung to the on boundary to bring up the 250 for Kippax in a patient 377-minute vigil at the crease. The partnership reached the heady figure of 300 runs with an effortless leg-side boundary by Kippax.

It was, however, too good to last forever, and the redoubtable Hooker was finally dismissed for 62 (in 303 minutes with 3 fours), his best First-Class score by a long way, caught by Ryder off a Beckett. Incidentally, the catch that terminated Hooker s, and, indeed, the team s innings, was the only chance offered during the entire epic stand of 307, a great testimony to the concentration and tenacity of both partners, and to their indomitable spirit.

The innings ended at 420, made in 452 minutes, the last pair adding an incredible 307 runs under the most extenuating circumstances, a world record for First-Class cricket that is still unsurpassed today, 88 years later. Alan Kippax remained undefeated on 260 in 387 minutes with 30 fours, scoring at 40 runs per hour, an exemplary performance in a marvellous career. NSW secured a lead of 44, an unthinkable situation at the end of the second day.

The official recognition of the world record was made known to Mr Hal Hooker at his temporary residence at Hotel Windsor, Spring Street, Melbourne, in the form of a letter under the signature of the Director of Kemsley & Company dated December 27, 1928, on behalf of his principals, M/s John Wisden & Co.

As if to rub it in, NSW had much the better of Victoria in the return fixture at Sydney at the end of January, inviting Victoria to follow-on after Don Bradman (340) and Alan Fairfax (104) had put on a 176-run stand in a first-innings total of 713 for 6 declared. Hooker had then got into the act by taking a hat-trick in the Victoria first innings and adding another wicket with his first delivery in the second to make it a 4-in-4, the first such feat in Sheffield Shield cricket.

The Brisbane Courier of December 27 paid the pair a handsome tribute, as follows: The Melbourne crowd, never slow to recognise a good performance, rose as one man and cheered the batsmen all the way from the wickets to the pavilion. A better innings than that by Kippax has rarely been seen on the Melbourne ground, and Melbourne crowds will infuture cordially endorse the high opinion of Sydney on the merits of Kippax. He was always themaster, and made strokes all aroundthe wicket with effortless ease andgrace. Hooker’s performance was alsoa wonderfully fine one, a straight batand good judgment being his chief characteristics.

Perhaps unnerved by the unexpected riposte from NSW in the first innings, Victoria lost their first four second-innings wickets for a mere 45. From there, a Beckett (95) and wicketkeeper Ellis (23) took the total to 125 before Ellis was dismissed. It was a Beckett and Hendry (69*) after that, adding 102 runs for the sixth wicket. Victoria declared their second innings on 251 for 6, leaving NSW a winning target of 208.

In the time remaining in the match, 2 hours on December 27, NSW scored 156 for 2, one Donald Bradman remaining not out on 71. The game ended as a draw. With all the adulations pouring in on the very deserving heads of Kippax and Hooker for their heroic deeds in the game, let us pause a while to consider the performance of a Victoria man playing in only his seventh First-Class match.

Edward Lambert Ted a Beckett, born 1907, had just about reached his 21st summer. A right-hand batsman and a right-arm fast-medium bowler, a Beckett was one man who had enhanced his growing reputation in this epochal game. With a score of 113 in the first innings and a 95 in the second, he proved himself to be a more than capable middle order batsman. He opened the bowling in the NSW first innings and captured 2 for 92.

A quick glance at the records reveals the fact that there have been 13 partnerships of 200 or more for the tenth wicket in First-Class cricket history till date. The 307 run association between Kippax and Hooker sits proudly at the top of the list, a seemingly unassailable goal at present, followed, in second place, by the 249-run stand between Chandu Sarwate (124*) and Shute Banerjee (121) on behalf of the touring Indians against Surrey at The Oval in 1946, a game that the tourists had won by 9 wickets. 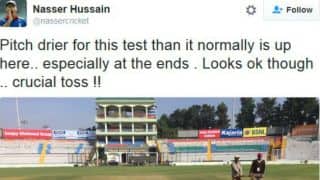