Having lost the series, there has been a lot of criticism coming along the England's way and more prominently skipper Alastair Cook's way. But amidst all the defeat's, there is something which can't be overlooked about Cook, because it is Alastair Cook!

India defeated England in the fourth Test at Wankhede Stadium, also clinching the five-Test series 3-0, with one match still to be played at Chennai. Undoubtedly, as an ardent fan of Indian cricket team, it is a good memory to cherish, given this was the first series victory for India against England in their own den after 8 years. Virat Kohli, Ravichandran Ashwin, Jayant Yadav, Ravindra Jadeja, among others have been instrumental so far in the series. However, everyone has been going gaga over the hosts’ stellar performance (of course, they deserve it). Meanwhile, some have started getting petulant over England’s dismal show.

More precisely, it is Alastair Cook and his captaincy that has caught everyone attention. Experts from cricketing fraternity have been talking about how ordinary he has been in this series as well as the ones played earlier this year (Bangladesh and Pakistan). Agreed, Cook has been ordinary, but he isn’t the only one to be blamed. If a team performs below par, the blame is usually put on the captain. To add more to it, Cook himself hasn’t been at his best at all. Hence, the criticism is fair and square.

Talking about his dismissal in the second innings, he looked defeated when he was trapped in front. Cook asked for a review, thinking it was not out. He misjudged the length as well as the pace of the ball. His expression was more or less similar when he was on the field watching Virat Kohli going great guns. He looked lost, for he knew the series had slipped away.

Cook looked very much himself at the start of the series. And rightly so, he scored a striking century. He looked calm, composed and resilient. In short, he looked the good-old Cook we know. He would get to the pitch of the ball, defend with utmost conviction, and attack with full flow.

But questions were raised when he delayed declaration to reach his century and take his team to a safe score in the second innings (on Day Five). Had the declaration come well before, maybe England would have been 1-0 in the series, changing the dimensions of the series. Instead, they had to settle for an unlikely draw, as Kohli barred the victory.

On the contrary, Cook changed his approach from the second Test. We saw something that Cook doesn’t have a reputation for. He looked aggressive right from the word go. Not that he has not done it before, but it is still Test cricket. He looked in dilemmatic conditions, whether to attack the ball or defend it.

If he should scythe the ball through the point region, drive it through covers, or let the ball nestle into the wicketkeeper’s gloves. I know, this is tough to decide the strokeplay in a matter of few seconds when someone like Mohammad Shami and Umesh Yadav are bowling at around 135-140 kmph. But then, what cannot be digested here is that it is Cook who we are referring to.

He never looked confused. In the usual circumstances, he would defend the ball with comfort. He is 6 feet, 1 inch. Therefore, defending the ball is never a problem for him. He is sublime and delightful to watch when in action.

A cricket purist still can’t get over the image of the ball making the way between his bat and pad, dismantling his  defence. Well, Shami and Ashwin must have extremely commendable to knock over a batsman of Cook’s class.

Here’s The HD Video Of Alastair Cook’s Off Stump Broken Into Two By An Absolute Ripper From #Shami #EngVsInd #IndvsEng pic.twitter.com/wAYt2mknNy

Cook has succumbed to pressure due to the inexperienced middle-order. Joe Root is one of the best in business after Virat Kohli ( to some extent Kane Williamson as well). If truth be told, Kohli has been the best of late, and his name is enough to even describe his genius. But Root brilliantly played even in such circumstances. It was again his knock in the second innings of the fourth Test that delayed the victory for India to the ultimate day. But after Root, there was no one who could tackle the likes of Ashwin and Jadeja, who eventually ripped them apart.

Ben Stokes, Jos Buttler and Moeen Ali tried their best but their effort was not enough.

Given the conditions England spinners are nurtured in, it difficult for them to learn the dynamics of spin-bowling. And that was one of the main reasons why England bowlers were assaulted by Kohli in the Mumbai Test. Adil Rashid and Moeen bowled 55.3 and 53 overs respectively in the first innings. And in the same match, England innings was bowled out in exact 55.3 overs.

England lack players, who can outplay the best in the business. Interestingly, a majority of these players were part of the English squad in India’s England tour in 2014, which the visitors had lost 3-1. And since then, England played overseas against West Indies, Pakistan (UAE) and South Africa. While they lost to Pakistan, they came up victorious against South Africa.

Time has changed, and India taking the full advantage of the home conditions to get back at the Englishmen with all their might.

Just a random stat. Kohli averaged 13.40 in the England tour, having managed just 134 runs in the five-match series (39 being his highest). Of course, Kohli had his share of failures. But Cook is already past prime. In addition, this is quality Indian side they are facing. Hence, the bashing seems too much.

Is Root ready to take up captaincy?

For now, Root is not the candidate or should not even be in contention to be the next skipper (not until Ashes 2017). Yes, he has what it takes to don the role of a skipper. But the current England team is still emerging, and they, more than ever, need Cook at the helm.

Kohli was well garnered under M S Dhoni’s wings and was then handed over the captaincy in the longest format of the game.

In the second innings of the Mumbai Test, Root played a characteristic innings. He waited till the ball when tossed up and shuffled across the crease to get behind the line of the ball, something we did not see from any other English batsmen.

This is one of the reasons that he looked comfortable against the Indian spin bowling, irrespective of the rate at which the wickets tumbled at the other end, as he went on to score a lone-wolf knock.

Many are fans of the way Cook constructs his innings, and he does so with sheer grace and panache.

This has been missing since the past 3 Tests, and England have suffered big time. And lastly, England would look to fight back to outfox the World No. 1 in the final Test at Chennai.

New Zealand could not do that. Australia are due to come in January (but again, it’s Australia), and Bangladesh will play one-off Test in February. Let’s just end it here!

Yes, someone has to challenge India in their own den , put their batting under pressure, and neutralise Ashwin and Jadeja on dustbowls.

The way Cook and his team brought some tough times at Rajkot, I’d want them to emulate it the same in the final Test. 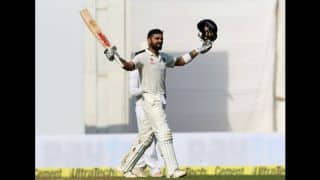 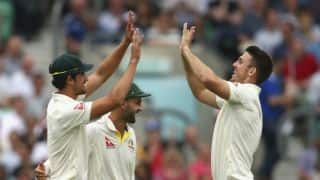 Ashes 2017-18 schedule announced; day-night Test to be held at Adelaide