Alastair Cook scored his fifth double-hundred and the highest by a visitor at Melbourne Cricket Ground.

After his magnificent 243 against West Indies, Alastair Cook‘s highest score read 37 in his next 10 innings. And thus began the talks of Cook’s armour wearing off and that he should hang his boots. Cook, however, is often unaffected by criticisms thrown at him. All that matters to him is accumulating runs without hogging any limelight. He did so and how during the fourth Ashes Test at Melbourne Cricket Ground: he scored his fifth double-hundred and the highest by an Englishman at the venue.

The previous best score by an overseas batsman was Viv Richard’s 208 in 1984. Last year Azhar Ali came agonisingly close to surpassing Richards, as Pakistan declared when they lost 9 wickets: he remained unbeaten on 205. Otherwise, the highest score at the venue is Bob Cowper’s 307 against England in 1966; he is the only one to have a triple-hundred here.

This is Cook’s second hundred in The Ashes. He had scored 235* at Brisbane in 2010. His highest is 294 against India at Birmingham.

Cook is also the first to score double hundreds in five grounds in two overseas nations India and Australia. 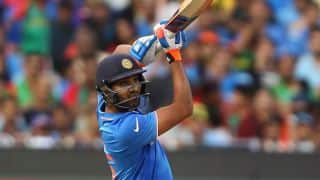 Rohit Sharma: I assess how I can be destructive