Six centuries at home in last 5 years certainly do not tell how prolific scorer he is, but still he has got close to 5,000 runs in this span.

In 2010, he became the second youngest after Sachin Tendulkar to 5,000 runs in Test cricket, and on Monday, it was fitting for more than one reason to see Alastair Cook eclipsing the batting legend and the great Rahul Dravid, as he completed 10,000 runs. Test cricket is the only format the 31-year-old plays in, and as someone who established himself as one of the best ever long ago, Cook deserves to be praised richly for his feat. One can only envy how rich his career has been, as apart from the lows which never kept him out of place for long, Cook has had Ashes wins home and away, to a historic win in India. Cook’s career has only been replete with success, but one still wonders if he would have been the first England cricketer to 10,000 runs had Kevin Pietersen been not cast away. ALSO READ: Alastair Cook 1st England batsman and youngest-ever to score 10,000 runs in Test cricket

In an era where batsmen reap rich benefits of carrying their short-format success and lessons into longest format, Cook remains Test cricket’s most obedient student. He works hard on his fitness, his individual game and on his chances as a captain. Yes, the obvious benefit of knowing English conditions way better than his contemporaries makes him the best batsman in England. On an individual basis, there is no one better than him who has potential to achieve success on some of the toughest pitches and conditions to bat in. Talent is not everything, many of the modern day batsmen lack application and Cook has it in abundance. ALSO READ: Alastair Cook breaks Sachin Tendulkar’s record: Twitter Reaction

Cook is the most disciplined when it comes to batting, in England, and even overseas. It is another matter that not many touring bowling attacks are as lethal as what England have in James Anderson and Stuart Broad. Cook’s style of batting is replete with lessons to others, with application being the first chapter.

He is strong off the pads and on the leg side, merciless against the short ball and a decent player on the off side. But to execute all this requires batsmen to stay on for long — which not many do while playing in England as they go fishing outside off and get edges flying to the slips more often than not.

Surprisingly, despite having richest of qualities to make runs in England, Cook still has not had success to the extent he would have liked. Since the 2011 English summer — when England ascended to No. 1 spot in Test rankings — Cook has scored only 6 centuries in England. Three of these have come against substandard Indian and Sri Lankan bowling attacks who have remained clueless as far as bowling in England is concerned, one against South Africa in 2012 in a lost cause and two against New Zealand.

In this period, Cook has won two Ashes for England as captain, but he has not scored a single century to boost his side. The closest he came to the three-figure mark was in 2015, but Mitchell Marsh dashed all hopes of getting his first-ever Ashes century at home.

Nevertheless, Cook is a prolific scorer once he is on-song. If the Ashes 2010-11 saw Cook’s rise as one of the best contemporary Test batsman with 766 runs, the tour of India in 2012 was the watershed moment. He scored 562 runs in 4 Tests, guiding England to an elusive series win, which is a rarity for the most hardworking teams.

The only blemish — and perhaps the biggest one — on Cook’s career remains his relation with Pietersen. Being the more aggressive among the two as run-getters, there are theories that Pietersen may have long ago surpassed Cook in the race to 10,000 runs. But ‘trust’ issues, England’s emphasis on young players and most importantly, Cook and Pietersen’s relationship that went awry brought the latter’s career to a loud, screeching halt which no one in England cricket management ever heard.

The IPL is over, which perhaps marks the beginning of the new season to many. The bilateral tours will begin shortly, and teams, their captains will start focussing on collective goals that they want to achieve. Steven Smith and David Warner (Australia), AB de Villiers (South Africa), Jason Holder (West Indies), Kane Williamson (New Zealand) and others in leadership of several international sides, were all busy in the cash-rich league. But as English summer arrived, Cook woke up from the slumber to warm-up for yet another season at home. Yet another season in which his bowlers will run through Sri Lanka and Pakistan, and yet another summer in which his batsmen will plunder runs.

Cook lives in a parallel universe, where IPL riches and the requirement of white-ball specialty does not exist. In his world, what matters is how well you leave the probing ball outside the off. In his world, how hard you work on and off the field remain the basics. And as he masters all these qualities, Cook promises runs.

But, promise is one thing and deliverability is another. England seem to be successfully transitioning from a team which had men of limited talent to the bunch which looks very special. But as an individual, Cook promises a hell lot but delivers very little. Six centuries at home in last 5 years certainly do not tell how prolific scorer he is, but still he has got close to 5,000 runs in this span. And then, Cook comes up with something like 263 against Pakistan in Abu Dhabi — something not all England batsmen can imagine doing. 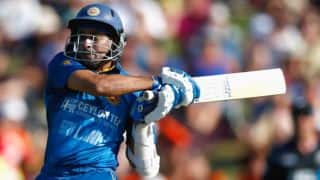