The whitewash suffered in the 2013-14 Ashes Down Under has shaken the English cricket set-up.

The whitewash suffered in the 2013-14 Ashes Down Under has shaken the English cricket set-up. England have both lost a series terribly as well as key members in the form of Jonathan Trott and Graeme Swann. Reports of a fall out between coach Andy Flower and Kevin Pietersen haven’t done any good to their cause as well. Amidst all this, Alastair Cook faces the biggest test of his leadership skills and of him being the right candidate to lead England’s revival.

Alastair Cook has seen it all. He has been amongst the highest run scorers, and from leading England to glory in his first series as a full-time captain, against India in 2012-13, to the humiliating whitewash in the recently-concluded Ashes series, Cook has had a roller coaster ride. As England begin their rebuilding phase with some of the top names missing from their ranks, Cook’s character and leadership skills, both on and off the field will be tested.

At this juncture, Cook’s relationship with and handling of the controversial Kevin Pietersen will be a crucial factor for England.

Cook is certainly the right candidate to lead England’s revival. From being a part of England’s disastrous Ashes campaigns in 2006-07 and 2013-14 to their successful run in the last couple of years wherein they also became the No 1 ranked Test side, Cook has experienced almost everything as a cricketer and has garnered all the necessary qualities for leading a side. Cook shared quality time with his predecessor Andrew Strauss and he now needs to take a leaf from the latter’s book on how to keep a side together.

Cook’s biggest tests ahead are not on the field but off it. The handling of trivial matters, looking into the smallest of the tasks, and more importantly changing the things that do not seem to be working now must be on his priority list. At this juncture, Cook’s relationship with and handling of the controversial Kevin Pietersen will be a crucial factor for England. Pietersen’s presence for England is a desperate need and at the same time England must chalk out a strategy to keep Pietersen performing at his level best. England just cannot afford to have Pietersen falling apart every now and then.

The 29-year-old Cook has a long journey as England captain and it is time he starts paying heed to all the suggestions and remarks about his captaincy that comes from former cricketers and experts. Strauss’s observation amidst the Ashes that Cook needs to be more aggressive in the England dressing room is a strong remark. “Long term, this may be the making of Alastair Cook because it gives him the opportunity to stand up to the rest of the team and say ‘This isn’t good enough, you need to do things my way from now, it’s not about doing things your way’,” said Strauss in The Guardian.

Former Australian spinner Shane Warne’s observation and remarks, before the start of Ashes 2013-14, were perhaps the beginning of what has been in store for Cook. Warne wants Cook to be a little more aggressive, and the former stood vindicated when Strauss reiterated his views.

Cook has the right set up to deal with. The coach and team director, Andy Flower, is staying with England, they have a right mixture of coaching and support staff and also have exciting young talent to nurture and take England forward. One of the most important factors is that of this bunch of cricketers having seen the highs, memories of conquering the world, which would serve as a motivational factor.

Alastair Cook has so far enjoyed his cricket as a batsman. The sixth cricketer to reach 8,000 plus runs in Tests and scoring the most centuries for England, Cook’s record as a batsman has been fantastic. But now, it is perhaps time for Cook to give the role of captaincy a bigger place in his career and lead England’s recovery. Cook has the perfect set-up to start with and England will only hope that things improve for them from here on. 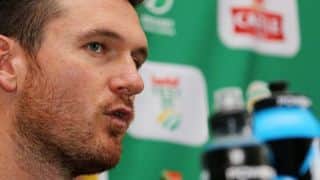