Cook is a man with all the right intentions, but not the man with the favourable results.

Struggling England captain Alastair Cook expectedly got another lifeline to continue as captain till the ICC World Cup 2015. While Cook’s supporters would be happy with the decision, in reality, England had no other option but to stick with Cook as the limited-overs captain. Devarchit Varma has more.

The speculations over England‘s captaincy and the future of Alastair Cook have been put to rest. The 29-year-old cricketer, who had a terrible last year, as the English side not only had a horrible tour to Australia, but also lost One-Day International (ODI) series to Sri Lanka and India at home, has been bestowed the responsibility of leading the national side in upcoming ICC World Cup 2015. While Cook’s supporters and well-wishers would be relieved with the decision taken by the England and Wales Cricket Board (ECB), it doesn’t provide a solution to the troubles England find themselves in. And combined with their selection errors for the Sri Lankan tour, England selectors might have missed a trick or two.

England’s performance against the Indians in the ODIs was shambolic in more than one way, as they were coming off from impressive series win over India in the Tests and were on a roll. While Cook saved his Test captaincy with the knock of 94 in the third Test at Southampton, he failed to make a mark in the ODIs and was subsequently attacked from all corners. Cook has clearly struggled in the limited-overs cricket and his poor form at the top continues to remain a worry. Opening the batting, Cook is expected to lead from the front, but having not scored a single century in more than two years, which includes as many as 40 ODIs, the pressure is still there and it will only keep on increasing with every single game; certainly not an ideal situation for Cook and England.

Cook is a man with all the right intentions, but not the man with the favourable results at the moment. He was audacious enough to put his hands up to lead England’s revival and to show the youngsters the way, but Cook is far from being the person he desired to be. He has struggled with the bat across formats, hasn’t been a leader that England needed and most importantly, Cook hasn’t changed a great deal as the on-field captain. Perhaps, the reason for England’s Test series win was more about India’s implosion rather than England’s resurgence, as the ODI series that followed proved this notion right with England drawing absolutely no confidence from what they had managed to achieve.

Unfortunately for England, they did not have options but to stick with Cook. James Anderson bowls most than any other bowler and he has never been looked as a captaincy prospect. Ian Bell, for that matter, has remain entangled in a web of and inconsistent performances. It is highly unlikely that England would hand over the captaincy reins to a youngster, for example Joe Root, who is here to stay. This leaves England with the only option for England to stick with Cook, and this is why selection head James Whitaker comes up with a statement which reads: “Yes he’s [Alastair Cook] been through his ups and downs this year but has showed tremendous resilience and has all the qualities we need to lead this England team.”

The reason why England have excelled in Test cricket and struggled in the other formats is simply the case of prioritising. The longest format is what they have emphasised on and this is why they went on to top the ICC rankings in 2011. If they want to improve their fortunes in limited-overs cricket, England will have to start investing in the format. They will have to develop players as well as their overall system. The results won’t come around quickly, but steps can be taken to keep the future in mind. The appointment of Cook may look to be a choice due to a lack of options, but England can always improve if they make the right calls. 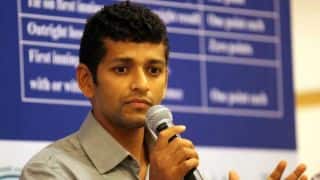