In the face of adversity, Alastair Cook has produced a typically composed hundred that has kept England alive in the first Test at Ahmedabad. 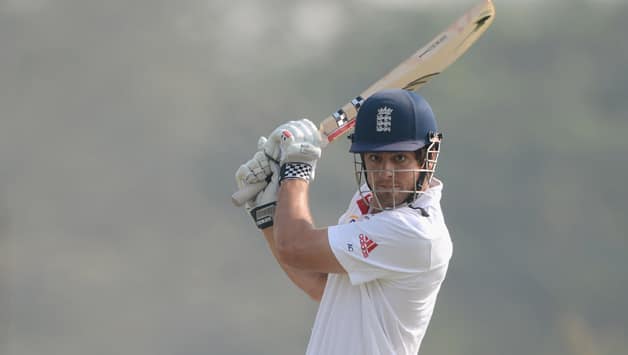 While Alastair Cook is building a reputation in one-day cricket, he is easily amongst the best in Test cricket © Getty Images

In the face of adversity, Alastair Cook has produced a typically composed hundred that has kept England alive in the first Test at Ahmedabad. Facing a huge deficit in the second innings, England needed his calm and exemplary discipline to battle the Indian spinners. There was a stutter in the middle after the opening partnership flourished, but Cook remained unfazed throughout and stuck to his meticulous gameplan. England’s new skipper has started his tenure with a bang and scripted a captain’s knock in the first Test of a tour that is said to be one of the most challenging on the circuit.

Cook isn’t the most flamboyant batsman going around. And that works against him, at times. His contributions may be upstaged by more belligerent displays, but there is no denying the fact that they have been hugely beneficial to England’s cause. Since he burst on to the international scene in 2006, Cook has been a permanent fixture in the England Test team and has provided them great stability at the top. However, it is only during the last two years that he has stamped his authority and grown in stature.

A very pertinent feature in Cook’s growth in the last two years has been his successful foray into One-Day Internationals (ODIs). In the aftermath of the 2011 World Cup, he was handed the mantle of captaincy in the said format – a prelude to his term in Test cricket. He had played a few ODIs in the years leading up to the appointment, but wasn’t really considered a viable option. However, he returned to the format a changed batsman. His approach to the game didn’t change so much, but it was the intensity. He looked more eager to score runs and get them at a faster rate. Since his return, his batting in ODIs has been reminiscent of Rahul Dravid and Mahela Jayawardene – men who have used touch artistry to score tons of runs in the format.

While Cook is building a reputation in One-Day cricket, he is easily amongst the best in Test cricket. For a 27-year-old, Cook’s record in Test cricket makes a fantastic reading. When compared to some of the modern greats, one can see that he is right up there.

Here is a comparison of Cook’s current record with those of the modern greats (on their respective 28th birthdays):

*includes the India-England game at Ahmedabad. However, his score at the end of day 4 i.e. 168 not out is included.

Cook has played more matches than the others at a similar age and has his nose just ahead of Tendulkar. The Indian maestro has scored more 100s and total scores over 50. Cook’s highest of 294 is second only to Brian Lara in the list. His average may not be as high as some of the others and the important factor in that regard is that he is an opener. Thus, as the commentators pointed out during a similar comparison, Cook’s number of innings would certainly be higher than the others as he walks out upfront. All the others in the list are middle-order batsmen.

Cook turns 28 in December this year and has three more Tests ahead of him. That gives him more time to upstage Tendulkar’s record by a significant margin. He is ahead of him in terms of runs and he might be able to eye some other parameters.

With such phenomenal numbers – those that put him alongside the greats – it is baffling that he isn’t spoken of a lot. It is his perhaps his style of playing and his general quiet demeanour that has eclipsed his aura. The numbers are overwhelming and cannot be denied. He is currently on 21 Test hundreds – one shy of equalling the England record. With years of cricket ahead of him, he will not only surpass that number, but has many milestones ahead of him.