Alastair Cook’s record in ODIs since 2011 is impressive; why the criticism then?

Alastair Cook’s record in ODIs since 2011 is impressive; why the criticism then?

Cook has been panned for his 'slow' approach in ODIs, despite a strike-rate of 81.

Since his comeback to the one-day setup in 2011, Alastair Cook’s strike-rate is 81.30, which is a decent figure when compared to some of the other more reputed and aggressive openers. Michael Vaughan and Graeme Swann seem to think that England can do away with Cook and bring in more dynamic batsmen. Nishad Pai Vaidya examines a few numbers and determines what goes against Cook.

Alastair Cook isn’t your average modern batsman who can dominate in the one-day game. The southpaw’s game is built on sound defence and a conventional approach that adds solidity to a line-up. In a previous era, he may have been perfect for One-Day Internationals (ODIs), but today, there are many who complain over his dour approach. Michael Vaughan and Graeme Swann have led the bandwagon to usher in a change in England’s one-day set-up, starting with Cook’s axing.

Vaughan and Swann’s arguments aren’t flawed. Ever since the likes of Sanath Jayasuriya, Romesh Kaluwithrana and Sachin Tendulkar revolutionized the approach at the top in ODIs in the 90s, the openers are expected to muscle the ball around the ground — a role that has only intensified after the advent T20 cricket. Cook doesn’t fit the bill in that regard as he relies on timing and placement to do the job upfront. He isn’t your enforcer — not a man who would give bowlers sleepless nights before an ODI. Having said that, his numbers aren’t too bad!

Cook was in and out of the one-day setup since he made his debut in 2006. It was only in the aftermath of the 2011 World Cup that he established himself as Andrew Strauss retired from the format. Cook was brought in and appointed captain. Cook returned a more positive batsman; ready to play his shots and unafraid to take the aerial route to the spinners. It was obvious that he had worked on his game and wanted to be a part of the one-day setup. Here is his record in ODIs since 2011:

This is an impressive record for any batsman. An average of 40.55 with four tons and 14 fifties at the top is very good. A strike-rate of 81.30 is decent and not too bad. In this era, an opener may be expected to have a higher strike-rate though. But, to have a fair assessment, we have to see where Cook stands alongside other opening batsmen since 2011 in terms of strike-rate:

Opening batsmen’s strike-rates in ODIs since 2011

Though Shane Watson, Mahela Jayawardene and Quinton de Kock lead this list with a strike rate of over 90, they haven’t batted in too many innings. Cook’s strike-rate of 81.30 is fine particularly when you consider the men around him. David Warner and Tillakaratne Dilshan, seemingly attacking batsmen, are only marginally ahead. Hashim Amla, another batsman who was initially stereotyped as a Test player is five notches ahead at 86.80. And, what is even more surprising is that the more “aggressive” batsmen in Rohit Sharma, Mohammad Hafeez and Ahmed Shehzad have strike-rates lower than that of Cook.

What is it then that goes against Cook? The answer is obvious— He does not instill fear in one-day cricket! Though Rohit and Tamim’s strike-rates aren’t all that great, they have the ability win the game single-handedly and tear apart the bowling on their day. If you are up against a target over 320, you would back Rohit, Dilshan and Tamim to set the tone. Cook doesn’t inspire the same confidence though he has essayed some flashy knocks. That is where Swann and Vaughan may have a point.

But, will England take the gamble of dropping Cook? Going by the numbers, it seems unlikely. The England captain has to brush aside those doubts! 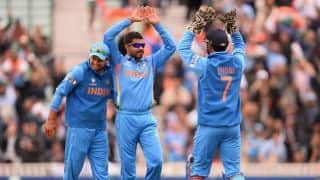 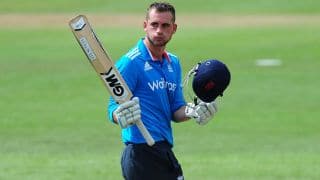 India tour of England 2014: 5 key battles to watch out for in Cardiff