Alastair Cook's leadership has come under serious doubt in the ongoing tour of Australia.

England captain Alastair Cook’s safety-first approach has invited constant jibes, mostly by Australian commentators and former players who openly admitted to their bias. He has received them in it the commentary box and on social networking sites. His captaincy has come under serious doubt in recent weeks, but one cannot forget that only a year ago Cook had championed his team from a resounding loss at Ahmedabad to an unprecedented 2-1 series win in India, a place where better teams were found wanting in the past.

Now that the dust has finally settled on England’s miseries Down Under; mauled in the Ashes 5-0 by Australia and outplayed in the One-Day Internationals (ODIs) 4-1, Cook finds himself in the toughest phase of his carrier — with both form and leadership. In the wake of the Ashes nightmare, the England and Wales Cricket Board (ECB) has announced that Cook would be ‘rested’ from the limited-overs tour of West Indies later this season. Whether this would turn out to be a blessing in disguise for the Stuart Broad-led team remains to be seen.

Having been England’s best performer spearheading the team, Broad will command respect and can adopt a fresh approach, which is the need of the hour for the team that has hit rock bottom. Pakistan’s World Cup-winning captain and one of the finest all-rounders of the game, Imran Khan, once said, “A captain always has to be a bowler and have an acute sense of how bowling works.” Broad provides England with just the right kind of leader who can take the team forward.

While experts on the game can ramble on about captaincy being a different kettle of fish, Broad’s career has been all about bouncing back from knocks that would have broken many a man, just like it had in the recently concluded Ashes whitewash for England. The problem with the England ODI side has been their stubborn attitude, caught up in the 1980s’ sort of mentality of stabilising at the start of the innings and going hammer and tongs in the ‘death’ overs.

Genuine prospects for the future like Alex Hales have been waiting to make an impact in the shorter format of the game and Cook’s absence should bode well for England to try exciting young talent at the top of the order and to have a settled team by the time the ICC World Cup 2015 approaches. After reaching three of the five World Cup finals played by 1992, the team has more often than not looked like passengers since, having set their priorities on the longer format of the game.

Cook and Ian Bell as an opening pair are undoubtedly a class duo; however, they are not going to spread tremours in the opposition ranks in the shorter format and need to find a core of players who can provide immediate solutions with an eye on the future.

Ben Stokes, Jos Buttler, Eoin Morgan and Steven Finn provide England with just the right weapons to steady their ship but the top-order and the void left by Graeme Swann needs to be addressed right away.

What does that bode for Cook’s future in the shorter format? As an opener Cook is one of the finest Test batsmen in the world but England needs a change — in attitude and in leadership; and Stuart Broad could perhaps be the solution, at least in the 50-over format. 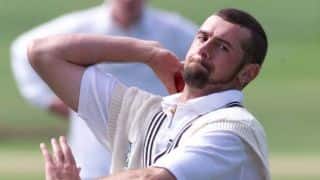