His doppelganger on the right is Matt Damon, who is an American actor and filmmaker.

Albie Morkel (left) is a South African all-rounder well-known for his aggressive hitting and medium-pace bowling. He’s a shorter format specialist and has made a name for himself in the Twenty20 (T20) cricket. He is the older brother of fast bowler Morne Morkel.

Morkel debuted in a T20 International (T20I) against New Zealand at Johannesburg in October 2005. Since then he has represented South Africa in 50 T20I games and has done a reasonable job with both bat and ball. He has also featured for 58 One-Day Internationals (ODIs) and played only a solitary Test for South Africa. Morkel is one of the most sought after players in the Indian Premier League (IPL), where he has represented Chennai Super Kings (CSK), Royal Challengers Bangalore (RCB) and Delhi Daredevils (DD).

His doppelganger on the right is Matt Damon, who is an American actor and filmmaker. Damon is widely reckoned for his Academy Award Winning screenplay Good Will Hunting (1997) which he wrote along with Ben Affleck. He is a renowned name in the film industry and the Bourne series actor has won Hollywood Walk of Fame Award in 2007 for his contribution in the film industry.

Azharuddin pays a visit to his “old friend” Sidhu in hospital 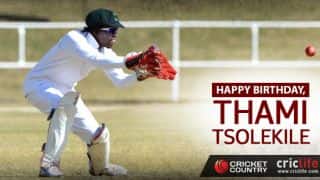