Albie Morkel, born on June 10, 1981 is a hard-hitting batsman and a wicket-taking bowler - the perfect example of the modern all-rounder. With the advent of T20 cricket, Morkel blossomed into one of its most dangerous players. However, he also has a good First-Class record - which gets eclipsed by his T20 feats. Nishad Pai Vaidya spoke to the all-rounder on the occasion of his 32nd birthday. Albie Morkel, born June 10, 1981, is a hard-hitting batsman and a wicket-taking bowler — the perfect example of the modern all-rounder. With the advent of T20 cricket, Morkel blossomed into one of its most dangerous players. However, he also has a good First-Class record — which gets eclipsed by his T20 feats. Nishad Pai Vaidya spoke to the all-rounder on the occasion of his 32nd birthday.

CricketCountry(CC): You come from a cricketing family in which your father was a player. Can you tell us about your early days and how you took up cricket?

Albie Morkel (AM): As you know, I grew up in a sports-crazy family. When I look at photos of my days as a toddler I always had a ball or bat in my hands. You can imagine growing up with two brothers who played cricket all day long. Even though I played other sports at school like rugby, tennis etc, I was really good at cricket. Hence the choice [to pursue] was easy.

CC: Who were your idols as you blossomed into a cricketer? How fast did you progress through the ranks to rise to the highest level?

AM: Back in the 1990s South Africa had lots of fantastic cricketers. As a young kid, I liked Kepler Wessels, although we were completely different cricketers. The other players I admired were Allan Donald, Jonty Rhodes and Hansie Cronje, to name a few. I took up cricket professionally when I was 18 years old — which was my final year in school.

CC: Your brother Morne Morkel is one of the best fast bowlers in the world. Can you tell us a bit about your sibling rivalry as you grew up with Morne?

AM: Interestingly, Morne only grew into the big man he is today later on in his life. As a youngster, he was very thin and wasn’t very strong. So it was quite easy to boss him around!  Little did we know then that he would turn into one of the best fast bowlers in the game. Our elder brother, Malan was also a very good cricketer. As kids we had our backyard ‘Test matches’ and you can only imagine how intense they were. Many hours were spent playing cricket and many tears were shed. Of course, let us not to talk about the broken windows!

CC: The international debut came in 2004 in New Zealand. But, the subsequent opportunities came few and far in between. How difficult was it waiting for another shot in that interval?

AM: I was picked when I probably wasn’t ready. It was nice to experience a tour like that, but looking back I probably needed another season or two of First-Class cricket. And, I see that in many players. Some of them thrive from a young age. Bur there are others who face a setback upfront and then come back as better players. So, for me to go back to the system and pick up experience wasn’t a problem. CC: Do you think T20 cricket has played a major role in shaping you as a cricketer? Do you think people may remember you purely as an outstanding limited-overs player? You do have a very good First-Class record.

AM: It was never my plan to focus only on T20 cricket. I enjoy all formats and as you rightly pointed out. I have a good First-Class record, yes, but T20 cricket gave me the chance to play a lot of games all around the world against some of the best players.

CC: The Test debut came in 2009 against Australia and you did well with the bat. However, it was your only Test. Do you feel you could have been given more chances? What do you think you could have added to the South African Test line-up?

AM: It was definitely one of my goals to play more Test cricket. It just didn’t happen for me even though I played well in our domestic First-Class competition for many seasons. The only chance I got, which was against Australia, was a fantastic experience. Breaking into the South African Test squad is difficult even today. This is because they have a settled combination and the guys are doing really well.

CC: How has your experience been at the Indian Premier League with the Chennai Super Kings? What are your thoughts of the fanfare in India?

AM: It’s been a great experience. Being part of the Chennai Super Kings setup for 6 years certainly shows that I played some good cricket for them and we had great success as a team. The IPL has good competitive cricket, which is played in front of thousands of people who really love and support cricket.

CC: You are one of the most feared hitters in world cricket. How do you approach an innings as you are expected to unleash the long handle from the word go?

AM: It is a difficult role to fulfill as there is no middle ground. You either win the game for your team or you lose it, so the graph is very up and down. Specific training is needed to get into the role and you spend hours trying to hit balls out the ground during training. 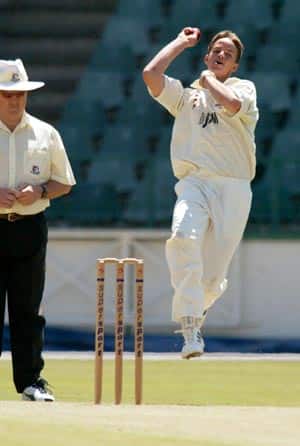 CC: You have this wicket-taking knack as well. Your presence adds tremendous value to a side. But, what do you enjoy doing more – batting or bowling and why?

AM: It is always good to have two bites at the cherry. If you have a good day with both, then that is obviously a bonus. If I have to pick one, it would be batting. I think it is more satisfying to perform with the bat just because of the rush you get when you take a bowler down.

CC: If you had to pick your most memorable performances, what would they be and why?

AM: It is difficult to pick. Sometimes a 20 off 10 balls in a difficult situation is just as good as a half century.

CC: How would you want yourself to be remembered by the cricket world, say, 20-30 years from now?

AM:  I would like to be remembered as someone who played the game hard, but fair.

CC: Finally, you said before the IPL 2013 that you feel your international career is over. Why do you believe so? You have numerous years of good cricket left in you.

AM: I was told by the selectors that it is highly unlikely that they would consider me for any format for South Africa again, so was just accepting reality, I still enjoy my cricket and so if they want to pick me in future it would be great, but for now my focus is just on the team I play for. Also, I have to make sure that I keep enjoying the game. That is the most important part.