Alec Bannerman: One of the greatest stonewallers

Alec Bannerman: One of the greatest stonewallers

Brother of Charles, Alec Bannerman was a legendary stonewaller. He was nicknamed ‘Barn Door’ for his stout, static, stagnant and stroke-less defence.

Alec Bannerman, born March 21, 1854, was an Australian opening batsman whom the crowd would often find ‘as wearisome to the flesh as fleas in a warm bed’. Arunabha Sengupta recalls one of the greatest stonewallers the game of cricket has ever seen.

When he passed away in September 1924, Wisden remarked “Alec Bannerman will be remembered as long as cricket is played.” Many spectators who saw him in action voiced similar concerns around his willow-work, fearing that he would continue to bat in the ongoing innings as long as cricket was played.

He was nicknamed ‘Barn Door’ for his stout, static, stagnant and stroke-less defence. Brother of the more famous Charles, who gained cricketing immortality by scoring the first ever run and the first ever hundred in Test cricket, Alec  was as different from his sibling as possible. While Charles Bannerman brandished every possible stroke, driving through the off with vim and vigour and hitting powerfully through the leg side, Alec (or Alick as he was also known) preferred the uncomplicated straight bat, offered with the last breath of life removed from the willow.

In his seminal Australian Batsmen, AG Moyes describes the reaction of the crowd to his approach with disturbing imagery, “At times the crowd found him as wearisome to the flesh as fleas in a warm bed.”

It did not bother him. Nor was he too perturbed when his home crowd at Sydney was lulled comatose by his seven and a half hour vigil at the wicket — resorting to barracking and comic poetry as perhaps the last resort to maintain some sanity.

Bannerman was one of nature’s unadulterated stonewallers, and eschewed every possible risk at the wicket — as also away from it. Indeed, while the rest of that trendsetting Australian XI travelled around the colonies, England and North America to play cricket, they indulged in a business venture, each one of the men a shareholder of the proceeds from the matches. Bannerman was the only one who played for a fixed sum, unwilling to venture into any sort of speculation. He sometimes boosted the assured amount with frill-free perks, on one occasion earning a bonus of £90 for good behaviour. He did not mind that. His agreed set fee of £200 for the early tours was three times his salary at the Government Printing Office.

And he hated to give his wicket away. In 1890-91, after nearly a dozen years at the top level, he refused to leave when given out caught at the wicket by umpire Denis Cotter in a match against Victoria. This rendered Tom Horan choleric enough to remark, “Some men require to be told half-a-dozen times that they are out before they will move away.”

In the 1888 Oval Test, Bannerman  fell to Billy Barnes, caught in spectacular fashion. Sydney Pardon wrote that it was “the finest of all the catches at cover slip ever brought off by George Lohmann”. For the rest of the afternoon, Bannerman buttonholed each and everyone in the pavilion and lamented at length about his atrocious luck.

All he wanted was to be at the wicket, run making an occasional, not quite necessary, by-product. According to the Wisden Cricketers’ Almanack, Bannerman was “the most famous of all stone-walling batsmen; his patience was inexhaustible.”

His adhesive qualities were very much in view from his very first Test match. Making his debut at Melbourne in 1879, he went in at No. 4 and was the last out, batting 235 minutes, top-scoring with 73. We must remember that there were many more balls delivered in an hour during those early days of cricket than there are today.

Bannerman thus proceeded about three-quarters of the way towards emulating the feat of debut century of brother Charles, but he did not quite get there. His brother, eight years his senior, played as the opener in the Test.

Australia triumphed in this match by 10 wickets, and Alec Bannerman had proved his credentials. He went in first in 46 of the 49 subsequent innings he played for Australia over the next 14 years.

Bannerman was one of nature’s unadulterated stonewallers, and eschewed every possible risk at the wicket — as also away from it

Before that Test debut, however, he had already toured England once. In 1878, before he had even scored a half century in First-Class cricket, Bannerman had made the side mainly for his brilliance in the field. He stood at mid-off, chasing balls tirelessly, according to Pardon: “fast, sure … and a wonderfully safe catch”.

In 1880, he went to England again, and walked out in place of his brother as the Australian opener alongside captain Billy Murdoch. As Charles had done in the Australia, Alec scored the team’s first run in England. In that innings, he scored 32.

Back in Australia he stonewalled again, scoring 70 in 265 minutes at Sydney in early 1882. And when the balls were counted for that famed Test at The Oval in 1882, much of it in the act of retrofitting, he was found to have scored nine from 67 and 13 from 89. In that Test, he went on to play a significant role in the birth of the Ashes, catching WG Grace at mid-off for 32 off the bowling of Harry Boyle.

When Ivo Bligh’s men set out on their quest to retrieve the Ashes, Bannerman was at it again, scoring his highest Test score of 94 in 245 minutes at Sydney. In his curious brochure, St Ivo and The Ashes, RD Beeson observed, “This performance, on such a sodden wicket, was a truly memorable one; and the plucky little batsman was warmly applauded.”

However, when the Ashes were lost and the sides were assembled for an additional Test match at Sydney, the hosts needed 199 to win on a tricky surface. And Bannerman for once rid himself of the stonewaller’s mantle and stroked the ball freely. The 63 runs he scored required close to three hours, but it was a splendid knock, made out of 107 while at the wicket, and even included a six. Australia won the Test by four wickets.

As the 1890s dawned, Bannerman notched up a new benchmark by even his standards of stonewalling. Against Victoria in 1890, he scored an unbeaten 45 stretching across five-and-a-half hours. Against Grace’s men at Melbourne in 1891-92, he batted 195 minutes for 35 and 230 more for 45. And at Sydney, with Australia trailing by 163 runs in the first innings, he came in to bat towards the end of the second day to essay his most famous innings.

He batted through the third day, and much of the fourth, spending 448 minutes at the wicket for 91. William Attewell, the Nottinghamshire medium pacer, sent down 204 balls to him, and he scored from just 5 of them. This was when the crowd was moved to polite barracking, and one poetic sort was moved to recite,

“O Bannerman, O Bannerman,
We wish you’d change your manner, man;
We pay our humble tanner, man,
To see a bit of fun.
You’re a beggar though to stick it,
But it ain’t our sort of cricket;
They haven’t hit your wicket,
Yet, you haven’t got a run.”

But, there was no ill feeling on either side. To the public he remained “Good old Alec”. They might have been frustrated into stupor while he was at the crease, but no one had anything against the little man who batted so courageously for Australia. As for the little man himself, Moyes summed it up when he wrote, “Like Gallio of old, he cared for none of these things, concentrating entirely on the job in hand … He could irritate, but never overawe, and two of him would have riled even a modern Job.”

His inexhaustible patience could be breached only with antics that were not quite cricket. On the field, he once heard a colleague breaking into a catchy number in the slips. Bannerman walked over to him and said: “If you want to play cricket, play it; if you want to sing, go and sing; but, for Heaven’s sake, don’t sing comic songs in the slips.”

Bannerman played his last Test at Manchester in 1893, during his sixth and final visit To England. He top scored in his final foray as he had done in his first, spending 235 minutes over 60 against Arthur Mold, Tom Richardson and Johnny Briggs. A stonewaller till the very end.

After his cricketing days, Bannerman followed his brother Charles into the field of coaching and umpiring. He coached for long at the Sydney Cricket Ground for the New South Wales Cricket Association. If he came across a young cricketer in shabby attire, he was prone to say, “Son, if you are not a cricketer you can at least look like one.”

In his umpiring he was again patient, steady and scrupulously correct, unlike his brother who was characteristically erratic and controversial.

Bannerman passed away in Sydney at the age of 70. 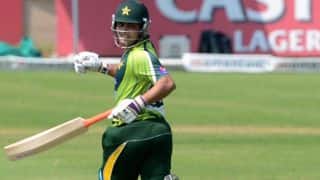