Alex Hales' inclusion will add the much needed aggression at the top of the England batting.

Alex Hales has been in scorching form recently, and his inclusion in England’s squad for the upcoming One-Day International (ODI) series against India provides some much-needed firepower at the top of the order for England. Shiamak Unwalla looks at the man who has fought hard to overcome the “T20 specialist” tag.

There have been few English batsmen since Andrew Flintoff and Kevin Pietersen that can be thought of as “big-hitters.” In recent times, the core of England’s batting has revolved around touch players — who are more known for their timing than sheer adrenalin-pumping fast-paced run-scoring — from Andrew Strauss, Jonathan Trott, Alastair Cook, and Ian Bell to the new guns like Gary Ballance and Joe Root.

Jos Buttler is perhaps the one batsman in the English line-up who can boast of natural aggression, but even he bats no higher than No 6. It is for this reason that the inclusion of Alex Hales in England’s squad for the ODI series against India is such a refreshing change.

However, to call Hales merely a basher would be doing him a tremendous disservice; while he may have made a name for himself as a T20 star, his recent form for Nottinghamshire — he has scored three back-to-back hundreds, and four tons in seven games — shows that he is more than capable of playing a long innings at the top of the order.

Hales has said that he wants to break free of his “T20 specialist” image on multiple occasions. In one instance , he said, “I think my reputation has always been as a bit of a dasher, a 20-over specialist, but I think I have shown the selectors this year that I can build an innings… I feel in a good spot and hopefully I can take that red-ball form into the 50-over stuff.”

Hales clearly cares about Test and One-Day cricket, and that means that he will not let an opportunity like this go begging, especially with the 2015 ICC World Cup just around the corner. If he can find his feet in ODIs by the time the England selectors take a final call on the World Cup squad, it could be good news for both Hales and England cricket. One feels that with Hales at the top and Buttler in the middle order, the traditionally sedate England side will find some much-needed explosiveness. 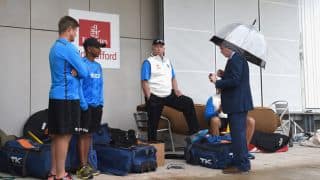 Geoffrey Boycott: Can't understand why Duncan Fletcher has not been sacked yet