They were on a lose-lose going into this match and they’ve done what they had to. If they had lost it would have been an absolute train smash and even winning, they’re only doing what was expected of them.

It was probably the last game they wanted to play after what’s happened over the last few weeks but England’s win over Afghanistan was a job well done. (ICC Cricket World Cup 2015:Full Coverage)

They were on a lose-lose going into this match and they’ve done what they had to. If they had lost it would have been an absolute train smash and even winning, they’re only doing what was expected of them.

It was never going to be an easy fixture to play in but at least they’ve done the job in a rain-affected match.

Can you take positives out of it? Probably not, but it’s a win and they brought in some new players. Looking to the future, there’s an indication of the philosophy with Alex Hales at the top of the order, they brought James Tredwell back in and he’s the best spinner they’ve got in the one-day game and Ravi Bopara was back as well.  (ICC Cricket World Cup 2015: Points Table)

They’ve obviously got an eye on what’s ahead and the way they want to go but unfortunately it feels a bit too late now.

Chris Jordan is a serious cricketer. This World Cup has really highlighted what direction the one-day game is going and it really is heading down the Twenty20 route. Players used to have a bit of a laugh about hitting fours and sixes and not getting out but that’s how it is these days.

Jordan’s a modern cricketer, he’s a powerful player, a fast bowler, he’s good at the death, he’s got great hands and his batting can be very destructive down the bottom end of the order as well.  It’s good to see him in there and he’ll play a lot of Twenty20 and one-day cricket for England in the future.

A lot of the good teams at the World Cup have got 3D players and he’s one of those.

I think everyone will realise now that Hales probably should have been playing a year ago and given a good run of games to get his form going into the World Cup. He’s quite a relaxed character and that’s another thing that England need to look at. He just keeps it pretty simple and he’s another youngster that will hopefully have time to adjust to international cricket.

The devastating thing is that it’s another four years until the next ICC Cricket World Cup. We keep coming out of these tournaments saying we’ve learnt lessons but it really is the time to learn them. We always find out the hard way.

You don’t want a rain-affected game in the first place. They used the conditions very well, got the ball to move around a bit and sometimes against Associate teams you can think short, short, short but they did move the ball around and took wickets that way.

They’ll move on but it’s just so disappointing that we’re not in the quarter-finals.

I’ve been in this situation and it’s really tough as a player. You feel as though the whole world is on top of you. You almost feel as if the extent of the inquest isn’t deserved. But they will understand they haven’t performed and I thought they had the most skilful squad that we’ve gone into a World Cup with.

Whether it be the approach or just a lack of confidence that has stifled them in the end, it’s been their downfall and they can’t get away from the fact that they’ve not been good enough and actually really far off the mark.

The frightening thing is that if they’d pushed teams close in the defeats, people would have accepted that, but there’s been such a huge gap between the best teams and England. They will need a mental break now. Although they’ve lost and everyone will want to see them working hard in the nets, these kind of results take a lot out of you emotionally.

They need to get away from the game, away from thinking cricket 24 hours a day and the anxiety of thinking about it all and really try to recharge as quickly as possible for a tour to the West Indies that everyone will have a close eye on after what’s happened over the last few weeks.

It’s a massive year for England. New Zealand will be tough in the Tests early in the season with the way they swing the ball and have good batsmen and then it’s the Ashes. It’s crunch time but the performances of the past few weeks have almost accelerated that feeling.

A lot of times England respond to that and we all hope they can turn it around and have a great summer. Its doom and gloom at the moment but in a few months I hope the confidence will be back and the players will be back to their best and enjoying the game again. At the moment it doesn’t look like they’re enjoying cricket and you don’t when you’re losing games.

But England needs to get that fun factor back and that’s when they play their best.

(The only England captain to lift an ICC Trophy, Paul Collingwood is his country’s most capped ODI player (197 matches) as well as most successful batsman (5,092 runs) to date. He captained England in 25 ODIs between 2007-2009, winning 11 and losing 12. Collingwood played in the 2003, 2007 and 2011 World Cups, scoring 474 runs and taking eight wickets. An athletic and agile fielder, Collingwood took 108 catches, including 13 in three World Cups. He is now part of the Scotland team coaching staff) 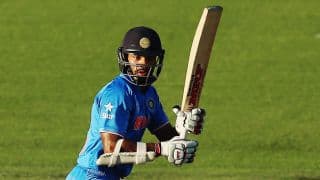