Before the over, Allan Lamb was struggling on a 97-ball 59. 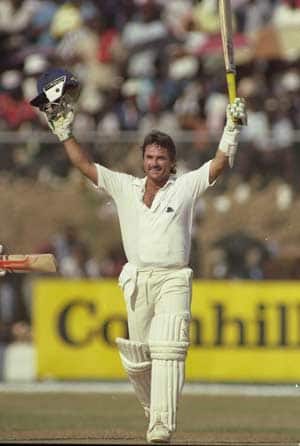 With 18 required for victory in the last over of the match bowled by Bruce Reid, Allan Lamb took England to victory in 5 balls! © Getty Images

In an unbeaten innings of 77 off 102 deliveries, England’s Allan Lamb took 99 deliveries to score his first boundary. Yet, the beauty of that situation was it came in the final over that yielded 18 runs to hand England a miraculous victory over Australia at Sydney. Prakash Govindasreenivasan revisits that epic over.

January 22, 1987.  Huge crowds of Australian supporters at Sydney Cricket Ground sat through a pleasant evening that brought for them an upsetting end when Allan Lamb handed Australia’s Bruce Reid his worst nightmare.

It was the fourth One-Day International of the Benson & Hedges series in Australia. England, Australia and West Indies had won and lost one game each before this tie.

Chasing a modest total of 233, England had a shaky start when they lost openers Bill Athey and Chris Broad with the score just past 50. The classy David Gower and Allan Lamb put on 86 runs for the third wicket before Gower was dismissed by Simon O’Donnell with England’s score at 137. Lamb brought up his half-century but was left stranded in the middle as England lost Mike Gatting, John Emburey, Ian Botham and Jack Richards for just 74 more runs. England was reduced to 201 for 7 when Lamb was joined by Phil DeFreitas in the middle with England still needing 33 runs to register their second victory of the series.

The equation came down to 18 runs required from just 6 deliveries as England fans began to brace themselves for a rather disappointing evening at Sydney. But, Lamb had different ideas.

Australian skipper Border threw the ball to Bruce Reid who, prior to that final over, had give just 26 runs in 9 overs. However, what Lamb produced in the next 5 deliveries threw Reid’s economical figures out of the window. With 18 required from the last 6 deliveries, here’s how the over panned out:

First ball: Lamb stepped out and hit the ball through off-side and stole a couple of runs as the throw at the bowler’s end was wide.

Second ball: Lamb scored his first boundary of his innings when he dispatched a good length delivery for a four through the square-leg.

Third ball: Reid was under pressure and Lamb piled on a lot more as he smacked the next delivery for a six over deep midwicket.

Fourth ball: If Lamb’s resolve was not enough, England was assisted by some nerves in the field for the Australians. Lamb played a shot similar to the one he played in the first delivery and got a two runs again, this time due to poor collection by Reid at the bowler’s end that resulted in an over throw and an extra run.

Fifth ball: With four runs required from two deliveries, Lamb didn’t think it was necessary to take the game to the last delivery as he flicked an over-pitched ball through the deep square-leg boundary to take England past the Australian total.

Lamb ended the innings on 77 off 102 deliveries, a knock that many players and experts alike would regard as one-of-its-kind, only for Lamb to repeat performance. This time it came against West Indies in the 1987 World Cup where the mighty Courtney Walsh was at the receiving end.