Alviro Peterson and Ashwell Prince: First instance of two batsmen scoring between 250 to 300 in the same innings in First-Class cricket

Alviro Peterson and Ashwell Prince: First instance of two batsmen scoring between 250 to 300 in the same i

There is an instance of two men scoring between 250 and 300 in the same match.

Alviro Peterson and Ashwell Prince slammed huge centuries in the County Championship for Lancashire against Glamorgan. Bharath Seervi lists instances of two batsmen missing their triple centuries having scored more than 250 in the same innings and the same First-Class cricket match.

Alviro Peterson and Ashwell Prince slammed big hundreds and shared a humongous partnership in the Second Division of County Championship 2015 match at Colwyn Bay. Prince last played for South Africa in the Boxing Day Test of 2011-12 at an age of 34. Peterson retired after the Newlands Test earlier this year, also at 34. Jonathan Bairstow and Tim Bresnan share record 366-run partnership for 7th wicket in County cricket

Both players are playing for Lancashire in the County Championship. Against Glamorgan they scored huge centuries. Both the players scored more than 250 in the first innings of the match but failed to get to their maiden triple-centuries, Peterson scoring 286 and Prince 261. Both players hit 35 fours each. Peterson hit couple of sixes while Prince sent the ball seven times out of the ropes.

Lancashire lost their first wicket Paul Horton at the score of just six in the seventh over. Peterson came walked out at No. 3 and joined Karl Brown to share a 98-run partnership. The score read 104 for 2 when Prince walked out; there was no respite for bowlers thereafter. No wicket would fell in the about next 90 overs as Peterson and Prince stood firm. Then went on scoring runs at a good rate. Both completed centuries and ended Day One without another wicket, Peterson on 205 and Prince on 154. Prince completed his double-century next morning before both registered 250s. Prince eventually fell for 261 after a 501-run stand for the third wicket. Yasir Shah becomes quickest Pakistan bowler to 50 Test wickets

Peterson also fell for 286 about six overs later. Both batsmen missed on getting to their maiden First-Class triple-centuries. This produced the first ever occasion in history in First-Class cricket when two men crossed 250 but both failed to reach 300 in the same innings. This never happened in over 56,000 First-Class cricket matches played till date.

There is an instance of two men scoring between 250 and 300 in the same match, but they were not in the same innings. Younis Khan most prolific Pakistan batsman after 100 Test matches

– As mentioned above, the Petersen-Prince is the first occasion for a team in the same innings of a First-Class match.

– The Sanjay Manjrekar-Lalchand Rajput was in the same match for the same side but in the different innings. Manjrekar scored 278 in the first innings and Rajput 275 in the second innings. Again, it is the only instance of two batsmen missing their triple centuries after scoring 250 for a side in different innings of the same First-Class match.

– The second instance in the table was a Test.

– Out of the four, three occurred in India.

There is only one instance of two batsmen scoring triple-centuries in the same First-Class innings: WV Raman (313) and Arjan Kripal Singh (302) did the same for Tamil Nadu against Goa at Panaji in 1988-89 Ranji Trophy season. Everything about nervous 190s in Test cricket

There are several instances of two batsmen scoring 250s, one of whom scored his triple century. The last pair was Ravindra Jadeja (303*) and Sagar Jogiyani (282) for Saurashtra against Gujarat at Surat in 2012-13. The same has happened twice in Tests: Garry Sobers (365)* and Conrad Hunte (260) against Pakistan at Sabina Park in 1957-58, and Mahela Jayawardene (374) and Kumar Sangakkara (287) against South Africa at Colombo in 2006. Andrew Mathieson becomes second New Zealand bowler to take a wicket with his first ball 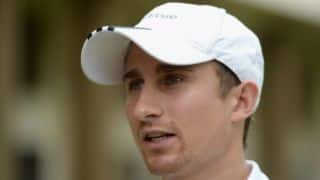