Ambati Rayudu will be an important figure in India's middle-order in the World Cup.

With some stellar performances from Ambati Rayudu in the recent past he has been awarded a berth in the Indian team for ICC Cricket World Cup 2015. But with most of the batsmen fading in the recently concluded Triangular series, Varun Arora feels Rayudu has a challenging role to play at the World Cup.

Ambati Rayudu is someone who comes with a major degree of employability — he can keep wickets and is a batsman with a solid technique. Going into the ICC Cricket World Cup 2015, Rayudu has played a mere 27 One-Day Internationals (ODIs) but has always been in the radar for selection.

He grabbed eyeballs when he smacked an unbeaten 121 when Sri Lanka toured India last year. He came in at No. 3 when India were stranded at 18 for one providing support to Virat Kohli. He went on to score his maiden ODI ton and swapped very well between the steady mode and the ballistic mode.  His maiden century earned him recognition and praises from the cricket fraternity and dug-out a spot for him in the World Cup squad.

Rayudu has shown resilience under pressure. He has been playing for the Mumbai Indians (MI) in the Indian Premier League (IPL) and has been a crucial part of the franchise. He has played numerous cameos, lofted the odd ball out the park, and has managed to win many matches for MI single-handedly.

Though Rayudu failed with the bat in the recently concluded Triangular series in Australia with 23, 23, and 12 in the three innings he played in. He got the engine warmed, played some shots but really could not push up the steam to push his innings. Rayudu may be not be a veteran to the Indian setup but the role he would play Down Under would be really important for India’s fate in the World Cup.

Rayudu does not have a fixed spot in the side; nor has he stamped batting position. India would probably use him as a floater: he could either be exposed at No. 3 or could be sent in to play a support role at No.5 or No. 6. With Kohli not in the best of forms in the triangular series Rayudu is most likely to be pitched in at No. 3 to battle the new ball. This World Cup could well determine the fate of Rayudu, who has a difficult role to play with the bat. He is also the back up wicket-keeper and may be required to keep the stumps if MS Dhoni is not on the field. 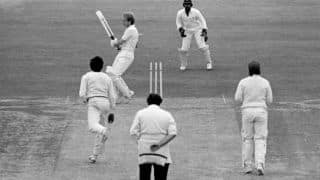