The 2015 Ashes pre-series talks centred around the margin of defeat Australia would dish out on England.

The 2015 Ashes pre-series talks centred around the margin of defeat Australia would dish out on England. But the cockiness of the Aussies and the way the series has panned out, has made mockery of all predictions.

When the series started, England rose to the challenge and won the first Test to take a 1-0 lead. Aussies have the habit of staging strong comeback. They did it by bouncing back to win the second Test. At Edgbaston, England once again stole the show and won the match convincingly by eight wickets.

The Aussies were expected to give a strong reply in the Trent Bridge Test, but Stuart Broad (eight for 15) ran amok and emerged as the hero for England in the absence of spearhead James Anderson. The result of the match was clear even before lunch was called on Day One of the Test.

England went on to win the Test and the Ashes. Post defeat, Australian captain Michael Clarke announced his retirement from Tests and the fifth match will be the last match of his career which will start from August 20, at The Oval.

Amul came up with a caricature (picture above) sympathising Clarke and his team on their defeat by saying its inimitable way. 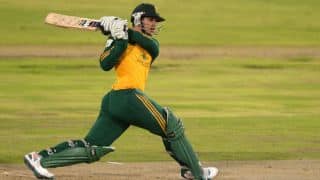