The idea struck me when I came across Worcestershire s Josh Tongue on a scorecard. You cannot blame me for doing a double-take. For a second I thought there was a spelling error of some sort, for the Antiguan Gavin Tonge had played a handful of matches for West Indies in 2009. But no, it was Tongue all right.

But then, if there can be a Tongue, why not make an XI of all sorts of body parts that have made their way to scorecards? I wanted to restrict myself to human beings, which meant that I had to leave out Wendell Bill (and many other Bills), and a handful of Gills who have played international cricket at Under-19 level (Akash for Canada, Neil for Ireland, and Shubnam for India). There was also Gill Smith presumably unrelated to Will who played 4 Tests and 31 ODIs for England Women).

No, I will keep this human. And for a completely different reason we will leave Jake Ball out, along with a cohort of Dicks and others that satisfy the same criterion.

I was also tempted to consider Les Ames, Tony Opatha, and Asoka de Silva, who probably stood a chance: their initials, after all, read LEG, ARM, and EAR. HIP (Herbert Ivor Powell) Edwards is rejected for a similar reason.

Hand did not exactly set the cricket ground on fire with his limited appearances for Cambridge, but a batting average close to 9 on non-pitches was not too bad. For example, in consecutive matches he scored 23 in a team score of 80 and 34 out of 94. You get the drift. He also played for a team called Fast Bowlers against Slow bowlers, which will make Hand a handy all-rounder.

It is unfortunate that all Jones Cup matches are not given First-Class status. Chin, thus, played only 1 First-Class match, for Berbice against Demerara in 1983-84, and scored 57 and 0*. Of course, that did not prevent him from keeping his chin up

Obviously, Travis Head needs no introduction. He scores runs at great pace, bowls accurate off-breaks, and is a true-blue 21st-century fielder. A promising new-generation all-rounder, Head will walk into the side as one of the superstars. Unfortunately, having kept wickets for South Australia Under-17s, Head will have to do the same here.

It is unfortunate if you have not heard of Knee, for she averages in the high 20s with bat (27 in Tests, 29 in ODIs) and 16 with ball in both Tests and ODIs. One of the stars of Australia Women in the 1960s and early 1970s, it is sad that Knee is not remembered as vividly as some of her contemporaries. She should do well unless her male teammates get weak in their knees

Kidney played 15 matches, mostly for Barbados, and averaged 15 with bat. This included a 73 against Trinidad. However, he was good enough to be selected for an all-West Indies side to take on a touring MCC in 1912-13.

Palm scored almost 2,000 runs, mostly for Western Province, at an acceptable 32. The highest point of his career came when he was picked for the Cape Town Test of 1928. He could not come to terms with Tich Freeman s leg-breaks and perished to him in each innings (does that make Freeman a palm-reader?). However, he did catch Wally Hammond off Henry Promnitz.

William Back played only 2 First-Class matches. He scored 4, 7, 0, and 1. He did not bowl or keep wickets, either. However, for Fremantle he was a champion; he even topped the batting charts in WACA Grade Cricket in 1888-89.

Two Beards have played Test cricket: of them, the New Zealander Don gets the nod over the Australian Graeme for superior numbers at both First-Class and Test level. When New Zealand won their first Test, against West Indies at Auckland in 1955-56, Don Beard played a crucial role with 31, 1 for 20, 6*, and 3 for 22. It was a useful but unspectacular contribution the kind New Zealand all-rounders have been putting up over decades. At domestic level, too, Don has superior numbers to Graeme.

Unlike others, this one was not a no-brainer. Much as I would have loved to pick the wonderfully named Brian Brain, his namesake David will get priority. An honest left-arm seamer, David Brain had played 9 Tests and 32 ODIs for Zimbabwe in the early 1990s.

The inspiration behind this list, Tongue s seam bowling made him rise through age-group cricket in Worcestershire (there has been no shortcut: he had made it from Under-13s to Under-19s, not jumping a step in the process). Tongue made his debut in 2016, and is definitely going to make it big as time moves on, provided the cat does not get him.

Of the two Tooths (Teeth?) in South African domestic cricket, Barry had the longest career: a fast-medium bowler, he played 14 matches for Griqualand West. He averaged 8 with bat and 47 with ball, but he once took 4 for 95 against Orange Free State including Colin Bland. He was not a champion, but at least no one will be able to call the attack toothless! 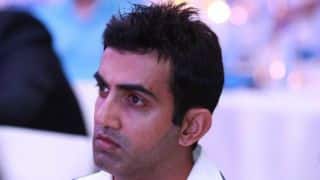