Andre Nel was in good form throughout the series.

Andre Nel counted on him not being picked for the Centurion Test against West Indies and planned his wedding likewise. He had an excellent series, was retained, and got married during the Test. On the next day, January 18, 2004, he celebrated his wedding by dismissing Brian Lara twice. Abhishek Mukherjee takes a look back at perhaps the best way to celebrate one’s wedding.

South Africa had won Sir Vivian Richards Trophy, 2003-04 by the time the fourth Test started at Centurion. Makhaya Ntini had wrecked them at New Wanderers with nine wickets, with Graeme Smith and Jacques Kallis chipping in with hundreds. Ntini claimed eight more in the innings victory at Kingsmead; Kallis scored another hundred, as did Herschelle Gibbs and Gary Kirsten.

The series was sealed with a high-scoring draw at Newlands. Kallis scored his customary hundred; there were hundreds from Gibbs, Jacques Rudolph, Mark Boucher, Chris Gayle, Brian Lara, and an exhilarating one from debutant Dwayne Smith.

The fourth Test started in familiar fashion. Smith (139) and Gibbs (192) added 301 for the opening stand, and Kallis (130) surprised nobody by scoring a fourth hundred in as many Tests. Smith declared at 604 for 6, leaving South Africa over an hour to have a go at the tourists. Play was called off an hour early due to bad light.

Andre Nel was had been in good form throughout the series: he had 3 for 78 and 2 for 49 at New Wanderers, 3 for 43 and 3 for 68 at Kingsmead, and 5 for 87 and 1 for 57 on the flat Newlands track. A tally of 17 wickets at 22.47 guaranteed him a place in the final Test at Centurion, more so because he had Lara thrice in the series (including twice in the third Test).

Unfortunately, Nel had other plans. He did not count on himself being selected for the Centurion Test. He and Deanne Weitz, his fiancée, had planned January 17 — the second day of the Test — as the date for the wedding.

The Extraordinary Book of SA Cricket (by David O’Sullivan and Kevin McCallum) narrates Nel’s dilemma: “With the wedding guests having accepted their invitations, the church booked, the reception organised and Nel selected for the South African team, the big fast bowler was faced with a choice — to attend his wedding or play cricket. So he did both.”

Nel arranged for a helicopter to take him from the ground to the church at Benoni. The fact that stumps were taken early helped him to reach early. Nel managed to get married an hour after the scheduled close of play.

Though Daren Ganga and Sarwan did not last long, Gayle and Lara added 102 from 134 balls. Lara cut loose, dismissing Nel over mid-wicket into the stands, but Nel had his revenge: the great man poked at one outside off in the second ball of the last over before lunch, and Boucher did the rest.

Gayle raced to a 113-ball 77, a whopping 62 of which came in boundaries. West Indies were bowled out for 301. Nel followed the wicket of Lara with those of Shivnarine Chanderpaul and Ridley Jacobs, and finished with 3 for 64.

Gayle smashed two boundaries off the first six balls he faced. Unfortunately, he was hit by Ntini on the box, and had to retire. Ganga was cleaned up by Ntini as well, which meant Lara had to walk out to join Sarwan.

Smith replaced Shaun Pollock with Nel shortly afterwards. Lara did not offer a stroke; he was trapped in front, the finger went up, and Nel celebrated his outstanding wedding gift. Deanne must have rejoiced the moment as well. It was the fourth time in succession that Lara had fallen to Nel.

South Africa had to chase a mere 46. Some brutal strokeplay from Smith and Gibbs and wayward bowling from Mervyn Dillon and Edwards meant they needed only 3.4 overs to win the series 3-0.

– Lara never played a Test in South Africa again.
– Nel finished the series with 22 wickets at 23.18. He never took more than 17 wickets in a series in his career again.
– Nel ended up dismissing Lara 8 times in 6 Tests they played together. Only Glenn McGrath (15 times in 24 Tests) got him more often.
– Unfortunately, Nel and Deanne did not have the best of marriages. He had a relationship with Jelena Kultiasova, a Latvian he met at Soho, London; he told Kultiasova that he was single. Nel had two other affairs. Once his wife moved out — she was pregnant with their first child at that point — Nel attempted suicide in October 2010. Thankfully, he survived. 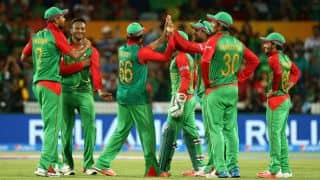 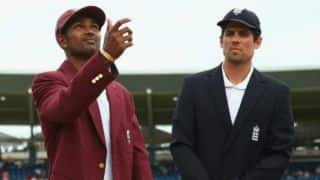