Andrew Symonds, born on June 9, 1975, was one of Australia s most important players in the 2000s. He was a captain s dream in the true sense for he could smash the ball a mile, take crucial wickets and also save plenty on the field. That is career ended is controversial circumstances is a pity. Nishad Pai Vaidya lists 13 facts you should know about Symonds.

Contrary to popular beliefs, Symonds isn t of aboriginal heritage. In fact, he traces his roots to the Caribbean. He was adopted by an English couple when he was a baby. They then moved to Australia in his younger days. However, being born in England meant that he held a British passport.

2. Announces himself against country of birth

Symonds was handed his First-Class debut by Queensland during the 1994-95 season. In a game against the touring England team, he smashed 108 not out, which was his maiden First-Class ton. His future Australia teammates, Matthew Hayden and Jimmy Maher also smashed tons in that game.

Symonds had made his First-Class debut in Australia in 1994, but he made impression miles away in England while turning up for Gloucestershire the following year. During a marathon innings of 254 not out, Symonds smashed 16 sixes, which remained a record for the most most hit in a First-Class innings for nearly 20 years. Jesse Ryder, Graham Napier and Muktar Ali equalled it in the 2010s. However, the record was obliterated by Colin Munro of New Zealand, who smashed 23 sixes during a game between Auckland and Central Districts in March 2015.

4. An England A call-up and a tough decision

By virtue of his British passport and of course the exploits with the bat in his maiden season, Symonds was picked for England A by Ray Illingworth in late 1995. There was speculation that he wasn t eligible to play for England A as he had turned up for Australia under-19s in 1994. Once there was a clarification from the International Cricket Council (ICC), Symonds was picked to tour Pakistan. However, he withdrew as his heart lay in Australia. If I decide my future lies with England it will mean leaving my family, my girlfriend and all my friends in Australia, Symonds told Sydney Morning Herald.

Symonds first played for Australia in 1998 at the young age of 23, but it took him nearly five years before he established himself in the team. In uncertain times, doubts can creep into one s mind and Symonds thought of moving to rugby league in 2002. In 2009, he was axed from the Australian setup after a controversial contractual breach. On his return to Australia, he started attending the training sessions of the team Brisbane Broncos. In June 2009, he also played a game for the Wynnum-Manly team in an exhibition game. However, he then returned to cricket and played on till 2011. His rugby experience probably came in handy when he shouldered astreaker during a match at Brisbane in 2008.

6. Nicknamed Roy after a basketball star

At a young age, Symonds was given the nickname Roy which stuck through his international days. Leroy Loggins was a Basketball player for Brisbane and some felt that Symonds looked like him.

7. Swimming through a pool of sharks with Matthew Hayden

Symonds has loved fishing but on one occasion, but it once literally put him in dangerous waters along with Matthew Hayden. Stephen Gray, who wrote Symonds autobiography along with the man himself, told DNA, Matthew, Andrew and another friend went for swimming. As it happened, the boat had suddenly sunk leaving the three in deep water. They had to swim for more than three hours to reach an island. They knew there were sharks in the water, but they dared to do it.

Early in his career, Symonds was mainly considered a limited-overs player. However, when Steve Waugh retired in 2004, Symonds was brought into the side and made his Test debut in Sri Lanka, a series that saw Ricky Ponting s initiation as Test captain and Shane Warne s comeback after a drug-related ban. Though Symonds wasn t very successful in the series, he did play his part in a bit of history as Warne picked up his 500th wicket. Symonds was the fielder who took the catch to dismiss HashanTillakaratne, which handed Warne the landmark.

In 2005, Symonds was dropped from the Australian team ahead of a tri-series game against Bangladesh in Cardiff. This was because he had consumed alcohol the previous evening. He had breached the team s rules and as a result, he was dropped for two games and also handed a fine. As luck would have it, Australia lost to Bangladesh in that game. In the aftermath of the Monkeygate incident, Symonds career got unravelled. In 2008, he went fishing, skipping a team meeting along the way. That saw his ouster from the team for a few months. Not only that, but once he returned, he was allegedly involved in a tiff in a bar. He also gave a controversial radio interview in early 2009 after drinking. During that interview, he called Brendon McCulluma a lump of sh**. Symonds returned to the Australian team later in the year and was there in the team for the ICC World T20. He had to sign a contract with the Cricket Australia (CA) which prevented him from drinking in public. Surprisingly, he was allowed to have a drink in the dressing room, but not in public. Ahead of the tournament, he had a drink with some of his teammates in a public place while watching a game of Rugby, which saw the end of his career. Symonds has said time and again that the accepted diagnosis was that he was a binge-drinker.

10. Sacrificing the dreadlocks for charity

Symonds had the trademark dreadlocks which gave him quite an intimidating look when he walked out to bat. However, he sported a bald look later in his career. In an interview with SABC, he revealed that he shaved the locks for charity for the leukaemia affected children and the flying doctors. Symonds said, They (Dreadlocks) went off for charity.

In early 2008, the cricket world was still simmering after the Monkeygate scandal. Symonds had become the Indian fans b te noire. However, the Deccan Chargers realised his worth and picked him up for USD 1.35 million, which made him the highest paid foreigner in the Indian Premier League (IPL) 2008 auctions. Only Indian skipper MS Dhoni commanded a higher price in that auction.

It was alleged by Symonds and the other Australian players that Harbhajan had called him a monkey during the Sydney Test in 2008. The word was racially offensive to Symonds, but the Indians claimed that Harbhajan used a local Indian slang which is phonetically similar to that word. It became a full-blooded row, with the two cricketing factions sharing a tense relationship that summer. In the end, Harbhajan was absolved of racially abusing Symonds. However, that was the beginning of the end of Symonds career as he never recovered from the dramatic episode. In 2011, he was picked to play for the Mumbai Indians, where Harbhajan was a fixture. The two players reconciled then and were seen celebrating Mumbai s success on the field in tandem. Chatting with SABC, Symonds confirmed that Harbhajan apologised for any heartache he may have caused him and his family.

Michael Clarke and Symonds were once close friends. Clarke also testified for Symonds during the Monkeygate controversy. However, the two fell apart after Clarke’s rise to vice-captaincy and the infamous episode when Symonds was sent home from an ODI series against Bangladesh in Darwin in 2008. Symonds had preferred to go for fishing instead of attending team meeting.

Here are excerpts from Clarke’s book where he revealed about his friendship with Symonds.

“Some former teammates will take his side, and feed his conviction that I let him down and put ambition ahead of mateship. I would say that he let me down too that if he had understood mateship as a two-way street, he would have seen that I had to do what was right for the whole team,” wrote Clarke in his autobiography, ‘My Story’.

Clarke wrote, “Ever since Warney’s retirement in 2007, Symmo has been my best friend in the Australian team and my favourite cricketer to play with. After he is sent home from Darwin, I try to catch up with him and make amends and rebuild the friendship. I continue this effort on and off for years and we play together again, but it’s never the same. When I become captain, I will be determined to do things a better way. It will cost me other friendships. None will leave as much pain as the one I lost with Andrew Symonds.”

Symonds hit back at Clarke after the book launch. Calling Clarke’s stories inaccurate. Symonds in a column for Newscorp wrote, It’s a shame Michael Clarke and I fell out, but I don t lose any sleep over it. With what s happened, between then and now, I m not even interested in talking to him. I ve read snippets from his book and I ve written two books myself, and what I will say is every story I wrote about another player I made sure they read it before I put it to print.” 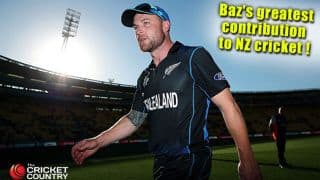 Brendon McCullum’s philosophy on cricket is a lost basic