Leadership has brought about the best in Mathews.

As Sri Lanka have marched along from strength to strength in 2014, Angelo Mathews has grown not only as a leader but also as a batsman. It was no surprise when Mathews led his side to yet another win in the first Test against Pakistan at Galle. Devarchit Varma writes that the Sri Lanka’s future is in safe hands.

Retirements can be tough on the best sides — leaving behind huge voids and a challenge for the next generation. In recent times, numerous teams have lost some of their greats. The Indians would never imagined life without Sachin Tendulkar. Likewise, Ricky Ponting and Michael Hussey’s retirements left Australia in a tricky phase. South Africa are taking their first steps in an era without Jacques Kallis. Sri Lanka are yet to enter that phase, but they can feel safe with Angelo Mathews in great form with the bat.

Mahela Jayawardene is one Test match away from hanging his boots from the longest format and Kumar Sangakkara isn’t getting any younger. But, leadership has brought about the best in Mathews. Not only he has improved as a batsman, but his record as a captain across formats is very promising. He has led them in 12 Test matches so far, in which Sri Lanka have been victorious on five occasions and have only lost two. In One-Day Internationals (ODIs), he has 23 wins and 16 losses in 41 matches so far.

Mathews is enjoying a tremendously successful year in 2014 as a batsman. In 10 Test matches, the right-handed batsman has garnered 1,119 runs with three tons and six half-centuries. He is the second highest run-getter this year after compatriot Kumar Sangakkara. For a minimum of 20 innings as Test captain, Mathews averages second to only Don Bradman. This speaks volumes of his ability as a batsman and Sri Lanka will look up to him, especially after the retirements of Jayawardene and Sangakkara.

The 27-year-old recently led Sri Lanka to an elusive Test series win in England. In fact, the year 2014 itself has been a memorable one for them. They won almost everything that came their way, and have shown that they may not struggle as badly as some of the other international sides have, when the big names walk away.

In the first Test against Pakistan at Galle, Mathews might have missed out on a century as he fell for 91, but his knock was crucial for the hosts. Mathews’s partnership of 181 with Sangakkara not only helped Sri Lanka overhaul Pakistan, but it laid the platform from where his side could dominate. Plus, he took the brave decision of declaring when they were only about 100 runs ahead. He gave the bowlers the confidence and that allowed them to bowl Pakistan out cheaply. Mathews has thus shown great signs of being a good leader, something that will help Sri Lanka in moving ahead.

Sri Lankan cricket has been infused with young talent from time to time. Mathews would be the torch-bearer of this young generation that is looking to emulate the greats of the past. Ravichandran Ashwin to be honoured with Arjuna Award 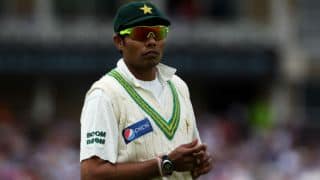