Mathews's ability to rise to the occasion has give his team hope in the absence of the veterans.

Angelo Mathews‘s vital unbeaten half-century against Pakistan was not only timely, but has helped Sri Lanka close in on a victory. Mathews’ batting has only witnessed improvement since being appointed as captain in 2013. Mathews thus has positioned himself as someone his team can count on without the presence of Kumar Sangakkara and Mahela Jayawardene, feels Pramod Ananth.

Mathews’ biggest moment as captain came when he led Sri Lanka to a series win in England by scoring two centuries—one at Lord’s and the other one at Leeds. He snared four wickets in the second Test at Leeds to record a historic win, and was therefore named player of the series.

Mathews has grown as a player and as a captain in the last two years. In fact, he has an astonishing record as captain in Tests, where he averages over 70. He averages over 50 overall, which is an excellent achievement in itself.

Angelo Mathews as captain in Tests

As captain, Mathews has a decent record as a bowler too. He has picked up 14 wickets with an average of 38, as compared to his career average of close to 53. He manages to get vital wickets, break partnerships when they are flourishing and at occasions, does not shy away from opening the bowling as well. He has shown the world that he is someone who believes in leading from the front.

Another interesting fact is that Mathews averages over 56 when Sri Lanka win, but drops to less than 40 when they lose, further emphasising his value to the team as a batsman.

His excellence leading the team is just not limited to Tests. He has done wonderfully well even in One-Day Internationals (ODIs). He may not have had a good run in the ICC Cricket World Cup 2015, in which his team crashed out in the quarter-final stage, but has otherwise been very sound.

Angelo Mathews as captain in ODIs

It should be noted that Mathews bats at either No.5 or No.6, giving him very less time to get those big hundreds. He is however, a great asset with the ball. When there is a need to get through some quiet overs in the middle stages, Mathews is Sri Lanka’s go-to man. Mathews has 97 ODI wickets so far, 43 of which have come as captain at a respectable average of 33.

With Sangakkara’s retirement, Mathews is the most experienced player in the side. His responsibilities have therefore increased a bit more as he will be entrusted to lead Sri Lanka into their new era. Also, the crucial No.3 position will be up for grabs, Sri Lanka have decided to award to Upul Tharanga in the third Test against Pakistan. Whether that will be long-term plan is to be seen.

Perhaps there’s a case to be made for Mathews to bat a little up the order, maybe at No.4. That way, he might find it easy to take control of the innings, with other batsmen batting around him. He is after all a senior member of the team. One cannot question his ability to score runs and promoting himself at this juncture could just be yet another masterstroke, if Mathews decided to do so.

As of now, the Sri Lankan team seems to be in safe hands and expectations from Mathews will only rise from here on. 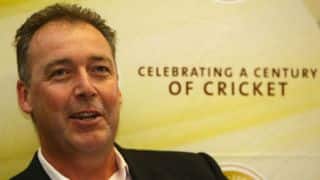