Angus Fraser, born August 8, 1965, is a former England pace bowler and the current Managing Director of Cricket at Middlesex County Cricket Club, as of 2013. Jaideep Vaidya goes through the career of a towering personality who could not quite reach his true potential. 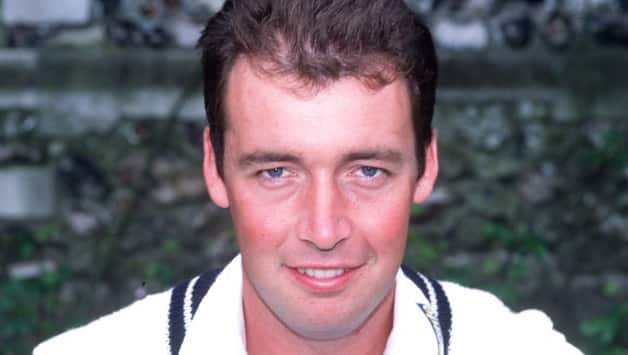 Angus Fraser, born August 8, 1965, is a former England pace bowler and the current Managing Director of Cricket at Middlesex County Cricket Club, as of 2013. Jaideep Vaidya goes through the career of a towering personality who could not quite reach his true potential.

At 6’7″, Angus Fraser towered above his contemporaries and counterparts. He had the height to intimidate his opposition and, with the right amount of aggression, could have joined the ranks of the Walshes and Ambroses of his generation as a tall and deadly fast bowler. But Fraser chose to do it his own way. He was by no means aggressive and emotive, rather tranquil and muted. As his career progressed, he began to be called the gentle giant of England and Middlesex. Some even likened him to the popular Winnie the Pooh character Eeyore — a perennially morose donkey. He was Eeyore in white flannels.

Perhaps the only emotion Fraser showcased on the field was when he sometimes kicked out at the grass after conceding one too many runs. He was a stingy fast bowler who could strangle a mis-fielding teammate and hated conceding extras. He delighted his captains with a controlled spell of line and length bowling, which perhaps did not earn him as many wickets, but kept things tight at one end while the others in the bowling attack reaped the benefits. His consistency earned him 177 victims in 46 Tests at an average of 27.32, including as many as 13 five-wicket hauls in an innings. In the 42 One-Day Internationals (ODIs) that that he played, Fraser scalped 47 wickets at over 30. His First Class tally is far more impressive: 886 wickets for England and Middlesex in 290 games.

Born in Billinge, Lancashire, Fraser was a late entrant into the English team, in 1989 at the age of 24, but found his feet straight away by getting the wickets of the highly impressive Steve Waugh and the centurion Dean Jones; he took four wickets in his debut innings. In only his second series, he got his first five-for when he took five for 28 against the West Indies at Kingston. This was in a Test where the prolific pairing of Gordon Greenidge and Desmond Haynes were threatening to run away with the game on the first morning itself with some destructive batting. But Fraser, who would go on to form a reputation of being a miserly bowler, kept the runs in check and then bowled a spell of five for six, as England went on to record an inconceivable win. “Before this match began, it would have been hard to find one person in the Caribbean willing to give England a chance of victory,” wrote Wisden in its Almanack report. “When it ended, just before lunch on the final day, the game’s established order had been so dramatically overturned that even those within the England party were scarcely able to absorb the fact.”

Four years later, Fraser was to return to the Caribbean islands and bowl England to another one of their most famous wins across the Pacific. In a series where Brian Lara was yet to steal all the limelight and accolades with his world record-breaking 375, Fraser took eight for 75 at West Indies’ impregnable fortress at Bridgetown, the Kensington Oval. It was the best bowling analysis by an Englishman against West Indies and the best for England since Bob Willis took eight for 43 against Australia in that famous match at Headingley, 1981. West Indies had won their last 12 Tests on the ground, but it was going to be an unlucky 13th as England shocked Barbados and came through by 208 runs to win their only match of the Wisden Trophy.

However, Fraser has been undone by the ingratitude of injury and bizarre selection decisions throughout his career. From his debut in 1989 until the end of the 1995 season, England played a total of 65 Tests, out of which Fraser took the field in only 29. A hip injury took two years out of his early career, where he didn’t play a Test after the Ashes Down Under in 1990-91 right until the England 18 months later in 1993. He missed 24 consecutive Tests and when he returned for the final match of the 1993 Ashes series, he bowled England to a consolation win at The Oval with figures of five for 87 and three for 44. 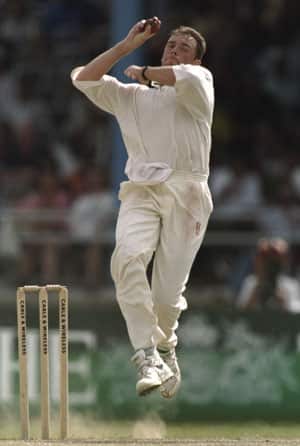 Angus Fraser at the point of delivery © Getty Images

But the most inexplicable reasons for Fraser missing games resided in the mind of Ray Illingworth, who during his tenure as chief selector of the England team, seemed to have a pathological dislike towards England’s gentle giant. Simon Barnes, writing for the Spectator, with perhaps a bit of exaggeration, called it the “most appalling and chaotic passage in cricketing history.” Illingworth’s decision to leave Fraser out of the squad that travelled to Australia for the 1994-95 Ashes was one that was met with a lot of criticism from all corners. The reason for denying Fraser a ticket was that he hadn’t played enough county games, which was a farce. To make things worse, Fraser only learned of his omission through the television. Even captain Mike Atherton had not contacted Fraser prior to the announcement, which made it an even bitter pill to swallow. “I was just so disappointed at the way it was done,” Fraser was quoted as saying by Wisden. “Playing for England means such a lot and if people treat you like that it makes it seem like it’s not such a big deal after all.”

The Australians were only too glad as they mercilessly hacked the Englishmen in the first two Tests, before injury and circumstances resulted in Fraser’s recall to the team. He promptly took a fifer on his return at Sydney and just missed out on bowling England to victory. Even then, Illingworth hadn’t learned his lesson as Fraser was dropped from the playing eleven in the first Test against the West Indies at Headingley the following English summer; Richie Richardson‘s team comfortably won by nine wickets. Fraser was recalled for the second match at Lord’s and responded with…you guessed it…a fifer, thus getting his name on the honours board for the second time (the first time being against India in 1990).

There is a popular story, perhaps a myth, about Fraser during England’s trip to the Caribbean in early 1998. Fraser takes the wicket of Lara and goes berserk. His teammates run over to congratulate him. “Nice wicket,” they tell him. “Brian Lara and all that, jolly good.” Fraser immediately responds, “Bugger Lara! I’ve now taken more Test match wickets than Ray Illingworth.”

Fraser took eight wickets in an innings again in that series at Port of Spain and 20 in the two Tests that England played at the venue. His tally for the five-match series read 27 victims. Returning home to take on South Africa, England, rather, unbelievably, won two successive Test matches against the Proteas and clinched a major series for the first time in 12 years. Fraser took five wickets in three successive innings and a total of 24 in five Tests to help England’s cause.

However, after England’s poor showing in the 1999 World Cup which they hosted, Fraser was shunted out of the team for one last time. He saw out his playing career at Middlesex and retired from all forms in 2002, taking up a writer’s position at the Independent, where he worked for seven years. In 2009, Fraser was appointed the Managing Director of Cricket by Middlesex. He was also named Wisden Cricketer of the Year in 1996 and awarded an MBE in 1998.