Anureet Singh grabbed eyeballs when Rajasthan Royals played the Kings XI Punjab in the Indian Premier League (IPL) 2015. The speed gun showed that Anureet had clocked 148 kmph during the game, bowling faster than even Mitchell Johnson.

Going by his wiry frame, one would hardly give Anureet Singh a chance to bowl quicker that 140 kmph. However, when Kings XI Punjab faced the Rajasthan Royals, the right-arm seamer clocked 148 kmph, bowling faster than someone like a Mitchell Johnson and Tim Southee. That an Indian seamer, other than Umesh Yadav and Varun Aaron, bowled at that pace and beat Johnson was a surprise. Unless there was an error in the speed gun, it is a remarkable achievement for Anureet, who has grown into a reliable seamer over the last 18 months.

One recalls Anureet as a 21-year-old seamer for the Kolkata Knight Riders (KKR) in the 2009 Indian Premier League (IPL). He could get only three games that year for Kolkata and had to wait for six years for his next opportunity in the tournament. Back then, you could see that he was a bowler of potential, which has materialised into performance in recent times. It was during the Champions League T20 (CLT20) 2014that he got a bigger stage and he shined with a degree of consistency for Punjab.

Anureet plays for the Railways in domestic cricket and had a breakthrough season in 2013-14. That year, he took 45 wickets in nine matches at an average of 19.48, with five five-wicket hauls. That helped him win selection for the Irani Trophy 2014 in Bangalore. To everyone’s surprise, he played alongside Pankaj Singh and Ashok Dinda in that game, edging out Varun Aaron. It was quite evident then that the selectors wanted to have a look at him ahead of Aaron, who had made a comeback into the Indian one-day squad by then.  Anureet then flew to Australia to play for India A later in the year.
Consistency is Anureet’s greatest strength. You can rely on him to hit the right areas on a regular basis. In the slog overs, he would get it right into the block hole, to deny batsmen any room to swing their arms. That aspect was quite evident in his first game in the IPL 2015. This time, he has managed to win selection ahead of Parvinder Awana, who has been a fixture in their line-up. That in itself is recognition of his form. Punjab have found a reliable seamer to bowl at the death. They need stability in the fast bowling department, to back Johnson and Anureet has provided it. 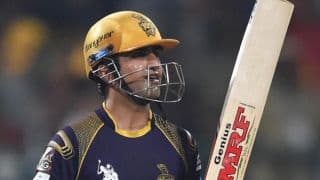 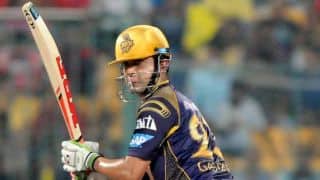