On the Board of Control for Cricket in India (BCCI) banning the presence of Indian WAGs for the Indian tour of Sri Lanka, Anushka was dismissive.

Bollywood diva Anushka Sharma slammed former Australian wicket-keeper and Channel 9 pundit, Ian Healy, for suggesting that the wives and girlfriends of the Australian cricketers had contributed to the team’s flop show in the ongoing Ashes.

Counselling the wives and girlfriends (WAGs) of the touring Australian cricketers to not be apologetic, Anushka tore into Healy for not doing his homework. “I’ve been following the Ashes and it was readily apparent that the Aussie batsmen just couldn’t negotiate lateral movement on quintessentially English seaming, swinging conditions,” Anushka told The UnReal Times.

“Stuart Broad, James Anderson and Steve Finn have exploited the conditions in Trent Bridge and Edgbaston to the hilt. Some of the Australian batsmen, on the other hand, played shots they wouldn’t be proud of. How in the world are Kyly Clarke [Michael Clarke’s wife] or Dani Willis [Steven Smith’s girlfriend] to be blamed for the incompetence of their men? I can understand jealous trolls who don’t have girlfriends making such loose remarks, but this coming from Ian sir! I was a huge fan of Ian sir’s wicket- keeping, but not anymore,” Anushka said, visibly upset.

Anushka also advised the Aussie WAGs to be there for their men. “I told Kyly and Dani not to back off and be present in full strength for the final Test. Your men will probably get beaten in under three days, and that’s a good thing. Would you want to sit through five days of mind-numbing Test cricket?” Anushka pepped up her Aussie counterparts.

On the Board of Control for Cricket in India (BCCI) banning the presence of Indian WAGs for the Indian tour of Sri Lanka, Anushka was dismissive. “I have far more exciting things to do than sitting through an entire India-Sri Lanka cricket series anyway,” the Bollywood diva said coldly.

“Will a hundred at The Oval change things?” Kyly and Shane Warne asked Michael Clarke 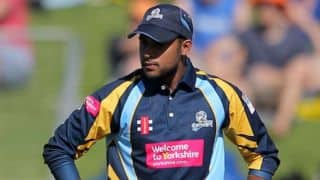