The cacophony of tweets lampooning Anushka Sharma saw her trend instead of Virat Kohli.

H Natarajan questions the digital dadagiri of a section of Indian society that swooped on Ansuhka Sharma like vultures.

The Supreme Court (SC) of India scrapped the contentious Section 66A of the Information Technology Act.  The SC, in its infinite wisdom, did that to protect the section from assuming draconian proportions by arresting any person posting offensive content. The learned judges opined that the law was “vague in its entirety” and it came in the way of the public’s right to know. The verdict was applauded by the masses, and rightly so.

The social media has been a great boon. It has championed the cause of freedom fighters in countries where dictatorial regimens shackled and their people, helped lost ones unite with their families and give the common man a tool to mobilise public opinion. Yet, this tool has been misused by irresponsible people who show scant respect for decorum or the lives of other people. The almost nil lack of accountability of these digital dadas has contributed to the misery of many lives.

The mass hysteria of a lynch-mob baying for Anushka Sharma’s blood after India lost to Australia in the 2015 World Cup semi-finals is a classic case in point. Here was a young woman who went all the way from India to offer moral support to her loved one. All was well till before the semis and would have been so had India won. But India lost and all hell broke loose. The cacophony of tweets lampooning Anushka saw her trend on Twitter instead of Virat Kohli. It was asinine in the extreme to blame someone who had absolutely no role to play in the teams’ performance. (READ: Anushka Sharma trends after Virat Kohli flops; actress unfairly targeted on Twitter)

The social media vultures swooped upon an innocent person only because she happened to be an actress. Maybe it was an easier way to gain attention and retweets by taking cheap pot-shots at Anushka because of her high profile. That could be only reason because the wives of other India players were not been targeted —mercifully. (READ: Amul takes a stand on Virat Kohli and Anushka Sharma saga)

A section of the people in social media dubbed Anushka ‘panvati’ [ill-omen]. Will those people call their daughters, sisters and mothers by such a name if their presence at an important event results in things going awry?

How would they feel if their own innocent family members were hauled over the coals on a public platform in the savage manner Anushka’s was? What kind of national pride these people have by showing India on a global platform in such a despicable manner?

Anushka is a modern girl. She is not doing something clandestine. She is going around with one of the most desirable young bachelors in the country and not with some lout, the likes of many who attacked her. She is the daughter of a Colonel in the army. What a way to thank a man who has risked his life to guard the lives of his countrymen, among whom were those who attacked his daughter in such a pathetic and cowardly manner! (READ: Millions of cricket fans in India, but how many can claim to be sensible cricket fans?)

Anuskha is confident young woman. The role she played in NH10 was brilliant— the role of a woman wronged who exacts revenge on the killers of her husband. But there is huge difference between reel life and real life. It was heart-breaking to see her suffer the barbs that were fired at her after India’s exit, and it was even more painful to see her boyfriend protectively clutch her hand tightly as both emerged out of the Mumbai airport after arriving from Australia. The fear on her face was heart-rending. Were they criminals? Why should good citizens face such horror? Are we living in a civilized society? And is this the way we thank a player who scored four hundreds in fourth Tests against the most brilliant attack in the world and in the most testing conditions and returning home as a hero? Is this our understanding of cricket about a man who scored hundred and led the team to victory against Pakistan — the match which mattered most for all of India in the 2015 World Cup? Is the way we greet our best batsman who is well on course to obliterate Sachin Tendulkar as the greatest ODI player in the history of the abridged version of the game? (READ: Yuvraj Singh pleads to “real Indian fans” to respect the private life of Virat Kohli and Anushka Sharma)

One of the most powerful dialogues in the film NH10 was when a Haryanvi cop tells Anushka, “Where Gurgaon’s last mall ends, so does the power of the constitution.”

After India’s 2015 World Cup journey came to an end, Anushka would have felt the entire cyberspace had turned into the dreaded lawless area that the cop talks about. 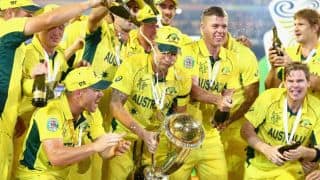