Team owner Nitin M Bagrecha of Plus Capital Ltd. is confident that the franchise can rally in the second half of the tournament.

Nangarhar Leopards have not had a successful opening in the inaugural season of the Afghanistan Premier League, but team owner Nitin M Bagrecha of Plus Capital Ltd. is confident that they can rally in the second half of the tournament.

Honestly, we are quite happy with the way things have been going, Bagrecha tells CricketCountry in an exclusive chat. As a franchise owner we can make available the best resources and infrastructure, but us is up to the players on the given day. We have a good coach [Venkatesh Prasad], the team we have is quite balanced and so far and hopefully we can make it to the finals and be the first team to win the APL title.

With a plethora of cricket leagues mushrooming all over the world, Plus Capital, who did not have any prior experience in sports, hopped on to the bandwagon. Baghera says that is was a calculated move as opposed to something they wanted to just try their hands at.

Basically, as we have invested lot of residential projects, Agro-businesses,electrical business, manufacturing and construction, so the next big thing we saw was either get into sports or entertainment, after the dot.com boom that had come, he explains. Cricket stood out, it stood out as sportainment , We were fortunate enough and and did our diligent process and we thought it is falling in line with what we estimated as next set of investment and the sector to be into. So APL was the perfect fit in to the vertical we wanted to foray into.”

Choosing the Afghanistan Premier League as their first venture in to sports was also a strategic move considering how Afghanistan made everybody sit up and take notice in the 2018 Asia Cup.

Afghanistan has been doing quite well in terms of cricket that they are playing; they play fearless cricket and cricket there is growing and we are trying to unlock the value that is there. It is just the initial three- four years and after that we hoping that it should come in the top three-four leagues all over the world, says Baghera.

While other five APL teams have Afghanistan players as captains, Nangarhar chose the Australian Ben Cutting to lead the side, in the absence of Andre Russell. According to Bagrecha said, Cutting fits the bill.

The reason of Ben was, at that point in time Andre Russell had not come, and Ben had been playing really well. He has represented Australia at the international level and and did well for Sunrisers Hyderabad (in the IPL) and he knows how to handle the pressure, the crucial situations and that has been visible in the matches he has played. The way he has carried out the team has been phenomenal, he says. 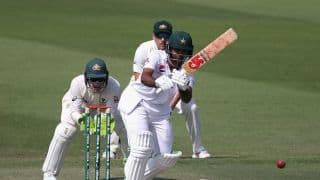