Sengupta had an excellent domestic season in 1959-60, scoring 146* against Bombay in the semifinal.

Apoorva Sengupta, born August 3, 1939, was a competitive all-rounder. Abhishek Mukherjee looks at a man with one of the most confusing Test careers.

Apoorva Kumar Sengupta was yet another product of the strong Services team of the late 1950s that reached the Ranji Trophy final twice in succession. Led by Lt Col Hemu Adhikari, the team eventually produced five other Test cricketers in the form of Chandrasekhar Gadkari, Raman Surendranath, Venatappa Muddiah, Narain Swamy, and Sengupta.

Like other members of Adhikari s team, Sengupta excelled in physical fitness (they were army-men, after all!) a trait Adhikari rated extremely highly. Additionally, to quote Christopher Martin-Jenkins from Who s Who of Test cricketers, Sengupta was a very good all-rounder, right hand opening batsman, leg-break and googly bowler and slip field.

Military duties meant that Sengupta s First-Class career was punctuated by wars; he could play a mere 45 matches in a career that lasted a decade, but he never lived up to his potential of the first two seasons. His career can be split in two distinct parts:

He also played a solitary Test amidst a lot of confusion, but more of that later.

Born in Lucknow, Sengupta joined the Army in his teens, and was drafted in (almost without a warning) to the Services team against the touring West Indians. It was the West Indians opening match of the tour, and the poor Services side faced the brunt of Roy Gilchrist (Wes Hall was thankfully rested).

Opening batting, Sengupta top-scored with 35 in his maiden First-Class innings, adding 51 for the second wicket with Adhikari; after Services were bowled out for 170, the batsmen made merry before Gerry Alexander declared with a 138-run lead at stumps on Day Two.

The bowling attack, consisting of Gilchrist, supported by Jaswick Taylor, Garry Sobers, Eric Atkinson, and Lance Gibbs, was a formidable one: once again Atma Singh fell quickly, but Sengupta and Adhikari added 75. Then the West Indians struck, removing Adhikari, Dani, and Gadkari in quick succession; the hosts were 130 for 4 when Mohinder Singh walked out to join the young debutant.

Sengupta batted almost throughout the day, and towards the end left his shell to light up the ground with some delightful strokeplay. Sengupta, then only an NDA cadet, helped save the match and finished on 100 not out; the innings was not forgotten.

The convoluted route to Test debut

Utter confusion reigned elsewhere. Lala Amarnath, Chairman of Selectors, had nominated Ghulam Ahmed as captain for the first Test at Brabourne Stadium, but Ghulam did not show up at the camp. Polly Umrigar was selected as captain. India managed to draw the first Test under Polly Umrigar thanks to Pankaj Roy s 444-minute fourth innings epic vigil followed by a dogged partnership between Gulabrai Ramchand and Manohar Hardikar.

With Ghulam back for the second Test at Green Park, he was appointed captain: Subhash Gupte famously took 9 for 102 in the first innings, India equalled West Indies total of 222, but Hall and Taylor turned out to be more than a handful for India as they slumped to a 203-run defeat.

Sengupta was meanwhile selected for Bihar Governor s XI against the West Indians for another tour match, this time. The match became a no-contest (more so because Bimal Bose, the captain, could not bat in the match); Sengupta opened batting (once again he kept Gilchrist out) and scored 35 and 22.

Ghulam was meanwhile retained for the third Test at Eden Gardens. Gilchrist blew the Indians away with 3 for 18 and 6 for 55; Rohan Kanhai slammed 256, Basil Butcher and Sobers also scored hundreds, and Indians lost by a humiliating margin of an innings and 336 runs. Ghulam resigned following the Test.

Meanwhile, Sengupta s leg-breaks saw Delhi slump to 144 in the Ranji Trophy contest. He finished with 6 for 32 (his only five-for) in the first innings, and added one more for good measure in the second. Services won by 10 wickets.

The Board, meanwhile, asked Ghulam to withdraw his resignation, to which the off-spinner agreed reluctantly. The selectors also brought in Vinoo Mankad to bolster the side. Four days before the Test Ghulam surprised everyone by retiring from Tests (he never returned). With Vijay Manjrekar (then India s best batsman) also pulling out of the Test, India were left without their leading batsman, leading bowler, and captain.

Amarnath re-hired Umrigar as captain and drafted in Jasu Patel for Ghulam and Sengupta for Manjrekar. Umrigar refused point-blank to lead if Patel was selected, and submitted his resignation on the evening before the Test. He was retained in the side, but till 15 minutes before the Test, nobody knew who would lead India at Chepauk.

The desperate selectors eventually cornered Mankad and dragged him to the toilet attached to the dressing-room. By the time Mankad emerged it was time for him to go out to toss in an Indian blazer; the team sheet also consisted of Sengupta s name.

Sengupta was, thus, thrown to the lions in what was only his fifth First-Class match. Alexander batted, Butcher butchered (if you mind the pun) the Indian attack after John Holt and Kanhai got them to an excellent start. With Joe Solomon also joining in the fun West Indies were bowled out for 500 in the final session of Day Two.

Opening batting with Roy, Sengupta was consumed almost immediately by Hall when he was caught by Sobers for 1. Roy and Kripal Singh were the only ones to put up some resistance as India were bowled out for 222. Alexander decided to bat and eventually declared on Day Four, setting a target of 447.

Things had been worsened by Mankad being ruled out due to an illness. He picked up 4 for 95 and batted at No. 8 in the first innings, but did not take further part in the match. Sengupta was held back in the second innings as Roy and Nari Contractor opened, but Hall and Gilchrist s whirlwind pace reduced the hosts to 19 for two.

This time Sengupta fared marginally better, and helping Umrigar add 26 before edging one to Alexander off Gilchrist for 8. India slumped to 151 the next day, and Sengupta never played another Test. Exactly what he had done to be dropped beats the mind, but then, that is the way Indian cricket had often worked.

Adhikari led India in the last Test at Kotla (which India drew). To add to the game of musical chairs, Datta Gaekwad was announced captain for the 1959 tour of England. He was injured after the first Test, which saw Roy lead India in the second, thus making it six captains in seven Tests but that is another story.

Sengupta s Test career was thus over in his teens. He had an excellent domestic season in 1959-60, scoring a valiant 45 (five batsmen scored ducks) and 146* against Bombay in the Ranji Trophy semi-final. The second innings performance remained his career-best.

He continued to play for Services; he was selected for North Zone for a tour match against the Pakistanis in 1960-61, but ended up scoring a duck. Selected again for North Zone during England s tour of India next season he managed 1 and 2; he got another chance against them, this time for Services, and scored 8 and 0. He hung up his boots after Services were knocked out of the Ranji Trophy semi-final of 1967-68 following their defeat against Madras: he scored 31 in his last innings before being snared by Srinivas Venkataraghavan.

With frequent disturbances at both frontiers (Pakistan and China) Sengupta s cricket appearances became sporadic. His valour saw him rise to the rank of Lt General (3 Star). He also served as the defence attache for both USA and Canada. Sengupta retired as the Colonel of the 16th Light Cavalry and DGMF. He was honoured with the Param Vishisht Seva Medal (PVSM) and Ati Vishisht Seva Medal (AVSM).

Following retirement (from the Army) Sengupta settled down in New Delhi with his wife Meena. The couple had two sons, Amitabh and Surojit. Sengupta passed away at R & R Hospital, New Delhi on September 14, 2013. 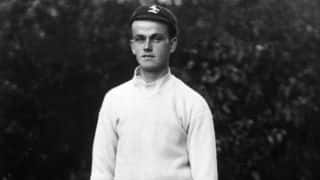