Despite being the leading run-scorer in Ranji Trophy and ignored by national selectors for years, Amol Muzumdar’s ability to redefine career goals are laudable. Abhijit Banare looks back at the life and times of Muzumdar. Despite being the leading run-scorer in Ranji Trophy and ignored by national selectors for years, Amol Muzumdar’s ability to redefine career goals are laudable. Abhijit Banare looks back at the life and times of Muzumdar.

While one student of Ramakant Achrekar has captured every summit in international cricket, the other student from Shardashram Vidyamandir he coached remains an unsung hero for a larger part of his cricketing career. However, the hunger to succeed even after being the best in the game for a considerable period is something that binds these two together. Amol Muzumdar, who recently recaptured the crown of being the highest run-scorer in Ranji Trophy has carved a niche of his own having faced a series of disappointments at crucial junctures of his career.

While many refer to him as unfortunate to have been left behind during the Tendulkar-Dravid-Ganguly-Laxman era, it would be fair to argue that Muzumdar wasn’t less skilled or scored poorly compared to the players mentioned above. Instead, it was a lack of vision for him on part of the selectors which kept him away. In recent years one can identify the same happening to Subrmaniam Badrinath — another victim of the whims and fantasies of selectors.

Being in the cricketing circuit for almost two decades, Muzumdar is not hanging around but making his presence felt by being a successful role-model for Assam earlier in 2009, and currently with Andhra Pradesh. Muzumdar’s career is a live manual for young cricketers how to manage their career and constantly reinvent oneself by taking up fresh challenges. And to add to it, he has never jumped into the pool to be a part of the cash-rich Indian Premier League (IPL) which has been termed as a career option for youngsters failing to break into the international circuit.

It is difficult to keep going once you accept your fate of being stuck in the domestic circuit. In 2002 Muzumdar was almost on the verge of announcing his retirement, but he somehow managed to hold it back. While it was the same year he got married, Muzumdar has stated that it was due to his wife who helped him to redefine his goals and he decided to continue his cricketing career.

After his two year stint with Assam, he wished to play for his home team again. With his former teammate Abey Kuruvilla at the helm for selecting the team, it could have been an easy process. But Mumbai Cricket Association’s (MCA) strange rule ensured his comeback plans didn’t materialize. MCA’s rule states that any player representing other state team has to serve a one-year cooling period before being eligible for selection. Mumbai who needed a solid middle-order batsman with Ajinkya Rahane and Rohit Sharma constantly missing games due national duty, not many would have agreed to subject such a rule on the experienced player.

However, Muzumdar made no fuss of the treatment and gleefully accepted MSK Prasad’s request to join the Andhra Pradesh (AP) team and as expected the Mumbaikar has sparkled yet again.

The 38-year old has the attitude of a typical ‘khadoos Mumbaikar’ which is evident from the way he has played adding a priced value to his wicket. He led from the front during a roller-coaster season of 2006-07 for Mumbai.

At the Platinum Jubilee celebration of BCCI in 2009, Muzumdar recounts the memory of the semi-final against Vadodra (in 2007), “We had failed to put up even one point on the table after our first three games and where confronting the possibility of relegation to the Plate group. It was then that the tide turned. What came to the fore was the Mumbai sprit, a never-say-die attitude and resilience at its very best. We registered five outright victories and clinched the title. Our march to the final featured a thrilling semi-final against Vadodara. We were reduced to 0-5! Only after getting my hands on the trophy did I have a sigh of relief.” For someone who has already been part of six Ranji titles previous to this win, his determination to succeed is laudable.

At the moment, the crown of being the highest scorer is something the Mumbaikar would be happy with. Yet he will be remembered for a long time as one of the finest players not to have represented India which is a silent laugh on the selectors over the years. As they say there’s no place like home, one can only hope to see him back in the Mumbai dressing room before he hangs up his boots. 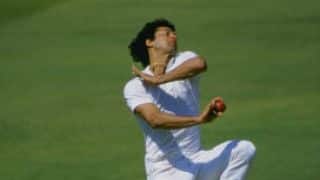