On July 23, 1890, debutant at Lord’s, Jack Barrett commenced his innings and went on to become the first player to carry his bat through an innings in an Ashes Test the next day. Abhishek Mukherjee looks back at a heroic and valiant effort by a debutant that has made its way to the record-books forever. Jack Barrett played only two Test matches for Australia. He was also an Australian Rules Footballer.

On July 23, 1890, debutant at Lord’s, Jack Barrett commenced his innings and went on to become the first player to carry his bat through an innings in an Ashes Test the next day. Abhishek Mukherjee looks back at a heroic and valiant effort by a debutant that has made its way to the record-books forever.

The Victorian John Edward Barrett or commonly known as Jack Barrett did not even score a First-Class hundred despite playing 50 matches. What was more, he scored 2,039 runs at a measly 25.81. The era, of course, was not one known for big scores: even by those standards his First-Class average was quite ordinary.

He was a quite competent Australian Rules Footballer, though; he played for South Melbourne Football Club and topped the 1889 season with 40 goals. He was also a doctor.

The Test had six debutants of which five were Australians. Barrett, of course, was one of them, but more significantly, this was also the debut Test of two future greats in Syd Gregory and Hugh Trumble. Billy Murdoch won the toss for Australia on a slightly sluggish pitch and elected to bat in front of 12,345 people.

Australia began solidly with John Lyons and Charlie Turner putting up 66 for the first wicket. However, things started going awry after Billy Barnes ran through Lyons’ defence. The South Australian had scored 55 of those 66 runs in 54 minutes with eight boundaries. Murdoch soon hit one back to William Attewell, who also bowled Turner, and Barrett was claimed by George Ulyett.

Gregory did not impress on debut, scoring a duck, and the rest of the wickets fell in a heap: from 66 without loss Australia collapsed to 132 in 86 five-ball overs (71.4 six-ball overs) as WG Grace changed bowlers and placed his fielders with clinical precision. Attewell picked up four for 42 and Bobby Peel mopped things up with three for 28.

Australia struck back splendidly when Grace hit one back to Turner in the very first ball of the innings. Jack Blackham, standing up to the wicket, then stumped Arthur Shrewsbury Sr off JJ Ferris, Turner’s partner-in-crime. Ferris also had Walter Read caught-and-bowled, and then Billy Gunn’s run out left England reeling at 20 for four.

Maurice Read (completely unrelated to Walter) then settled down with Ulyett for company. The initial spell of Turner and Ferris was seen off and the partnership grew in stature. The wicket got better as play progressed through the day. Ulyett grew in confidence and went past Maurice Read; the two added a vital 72 before Lyons, brought on by Murdoch, went past Read’s defence.

Peel walked out to join Ulyett; the two Yorkshiremen remained at the crease at stumps with Ulyett on 45 and Peel on eight. England were 108 for five, 24 runs behind.

Around 12,726 people turned up to watch the second day’s play at Lord’s in anticipation of a keen contest. Peel soon became Trumble’s first wicket — but not before England had taken the lead. Once the two were separated Lyons bowled Ulyett for 74 and then picked up the final three wickets in no time.

England were bowled out for 173 in 110.1 overs (91.5 six-ball overs). The lead of 41 might not seem huge in magnitude but was significant with respect to the team scores in the Test. Lyons stuck to a tight line and length and outdid his teammates with figures of five for 30.

Australia sent Lyons down the order in the second outing, opting to open with Barrett and Turner instead. Peel removed Turner early and then bowled a promoted Harry Trott. Australia went to lunch with a sorry eight for two, still requiring 34 to evade an innings defeat.

Barrett eventually found some support in Lyons, who batted even faster than in the first innings. He eventually fell to Peel for a 25-minute 33, scored out of a partnership of 40. He had definitely been the star performer of the Test. Murdoch, batting at five, came to the aid of the rocklike Barrett. Another 36 more was added before the Australian captain was bowled by George Lohammn.

Lohmann, who had gone wicketless in the first innings, now bowled with supreme precision. Australia inched past the 100-mark and Grace eventually brought himself on. Barnes finally ended Gregory’s resistance and Grace, in a short burst, accounted for the debutant Percie Charlton (leg-before) and Blackham (caught at slip) in a short span of time. Australia were 119 for seven, only 77 runs ahead.

Barrett, however, seemed immovable at the other end. Ferris and Trumble came and went, and debutant Kenny Burn found himself coming out to join Barrett at 142 for nine. Barrett was the epitome of defence and did not make an effort to guard Burn from the attack: at stumps Barrett was on 63 and Burn on 15 as Australia finished with 168 for nine, 127 runs ahead.

Burns was caught behind off Attewell after Australia added eight more runs the next morning. Barrett became the first batsman ever to carry his bat in an Ashes Test; he was also the second in history to do so after Bernard Tancred. Barrett’s essay of 67 had lasted for 280 minutes.

Australia had been bowled out for 176 in 140.2 overs (117 six-ball overs). Lohmann and Peel picked up three wickets each, and England were left to score an easy 136 on a wicket that was getting better.

Ferris removed Shrewsbury early, but the 42-year-old Grace looked at his destructive best and Gunn provided him excellent company. When Gunn eventually hit one back to Ferris with the score on 101 the match was as good as over. Grace began to play his strokes before Trumble removed Walter Read with a single left for victory. Maurice Read walked out and finished off things.

England won the Test by seven wickets. They had batted for 75 overs (62.3 six-ball overs) and had gone 1-0 up in the series.

–    Australia lost the next Test at The Oval by a two-wicket margin thanks to Fred Martin’s 12 for 102, thereby conceding the series. Dr Barrett scored zero and four. This turned out to be his last Test: he finished with 80 runs from two Tests at 26.67. He passed away at 49.

–    The third and last Test at Old Trafford was abandoned without a ball being bowled. 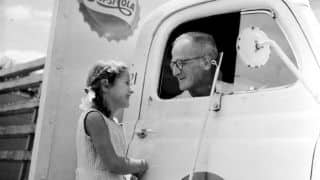