Joe Darling scored his century in only 91 minutes against England in March 1898.

Joe Darling scored a 100 in 91 minutes to pull off an amazing chase against England on March 2, 1898. Abhishek Mukherjee looks at Australia’s fastest Ashes hundred.

Along with Clem Hill, Joe Darling was perhaps the first great left-handed batsman in the history of the sport. In contrast to the single-minded accumulator Hill, Darling was a sturdy man who could drive the ball extremely hard, and could set the fielders running for cover on his day. On that day at SCG, however, he surpassed even his own lofty standards.

The 1897-98 Ashes had started off with an English victory at SCG: KS Ranjitsinhji had scored 175 (thus being the second man after Harry Graham to score a hundred in his first Tests in both England and Australia); Archie MacLaren scored a regal 109 (in his first Test as captain: he was playing after Andrew Stoddart had pulled out); and England scored 551 (Jack Kelly became the first wicketkeeper to not concede a single bye in a total of over 500).

In response, Jack Hearne shot out the hosts with 5 for 42 and 4 for 99. Darling scored 101 in the second innings, thus becoming the first left-handed batsman in history to score a Test hundred. This was also the Test where the hearing-impaired Charlie McLeod was bowled off a no-ball, did not realise that it was a no-ball, and was run out. The target of 95 was overhauled with 9 wickets in hand.

Australia hit back at MCG with McLeod scoring 112 and Hugh Trumble and Monty Noble sharing 15 wickets between themselves. This was the match where Ernie Jones became the first bowler to be called for chucking (by Jim Phillips) in Test cricket. Australia won by an innings and 55 runs.

At Adelaide Oval, Australia won by an innings yet again: Noble and McLeod picked up 5 wickets apiece in the second innings (Noble also had 3 in the first, while Bill Howell had 3). Earlier, however, Australia had scored 573, based mostly on Darling’s sparkling 178.

In the process Darling became the first batsman to score two hundreds in a Test series. He also reached his hundred with a six — which remains the first six in Tests. This feat is not to be taken lightly: till 1910, the ball needed to be hit out of the ground for a six, clearing the short square-boundary of The Oval to reach 104 from 98. The ball from Johnny Briggs, no less, had landed in a park.

Australia regained the Ashes at MCG with an 8-wicket victory. Once again England followed-on after Hill had scored 188 out of 323; the Australia bowlers shared the scalps (Jones, with 6 for 100, had the best figures); and opening batting, McLeod helped the hosts chase down 115 in no time.

Thus, the fifth Test at SCG had already been reduced to a dead rubber by the time the teams reached Sydney. Finally the English batsmen came good with MacLaren putting up a 111-run opening stand with Ted Wainwright. There were valuable contributions from Tom Hayward, Bill Storer, Frank Druve, and George Hirst, and though no batsman crossed 65 six men went past the 40-mark. Jones toiled hard to pick up 6 for 82 as the tourists scored 335.

Once again McLeod led the fightback, but things did not look good when both Darling and Hill fell cheaply. There was some resistance from Jack Worrall, but thereafter it was all about Tom Richardson’s stamina and perseverance against the Australians.

Richardson was no ordinary man: his ability to endure extreme hardship was tested from his youth when he walked 14 miles to and from The Oval every day with his kit. He was fast, straight and relentless and from time to time, he unleashed that venomous fast delivery that was bowled with an off-spinner’s grip and darted into the right-hander sharply.

Barring McLeod (64), Noble was the only other man (31) to go past the 30-mark as Australia were bowled out for 239 in 100.1 overs. Richardson bowled 36.1 of these, finishing with a career-best 8 for 94; had there been more support from Briggs and Hearne, among others, things would have been different.

Jones struck back immediately, removing MacLaren first ball, and England were soon reduced to 30 for 3. Despite a 69-run fourth-wicket stand between Hayward and Storer, they never really recovered and were bowled out by Trumble (4 for 37) and Jones (3 for 61) for 178. Australia needed 276 to win.

Australia started early on Day Four in front of 4,000 spectators on a bright day. McLeod started cautiously, but Darling launched himself into the English bowling from the very beginning: he drove Richardson for two boundaries in an over — and hit out at Briggs at cover-point; unfortunately for England, Briggs dropped the catch, albeit a difficult one.

Hearne broke through when McLeod played on against him. Richardson sent down a beamer (perhaps unintentionally) at Darling, but the Australian managed to duck; soon afterwards Hill was bowled by Richardson when he tried a leg-glance off Richardson, missed the line completely, and was bowled. Worrall joined Darling with the score on 40 for 2.

Unperturbed by the situation, Darling kept the strokes going, smashing four boundaries off one Richardson over. He brought up his fifty in only 39 minutes, and soon afterwards, on 58, he gave another chance when he tried to clear the fence off Richardson — only to be dropped by Hayward at the boundary.

Then the ever-consistent Richardson hit Darling on the pads and went up for a vociferous appeal, Storer joining in: Charles Bannerman, however, turned the appeal down. There was almost a rare showdown of sorts between Storer and Bannerman before MacLaren had to run in and intervene. The hooting stopped only after Storer was shushed by MacLaren. At lunch, Australia were 92 for 2 with Worrall on 17, but the real threat, Darling, was on 68.

As news spread out, more spectators flocked into the stadium and by the time play had resumed, the crowd had reached an estimated 12,000. The Australian hundred came up in 80 minutes amidst tumultuous applause. Darling, at this period of time, hit 7 fours in almost as many balls, forcing MacLaren to replace Briggs with Hearne.

Darling brought up his hundred almost immediately in 91 minutes; it was the fastest Ashes hundred by an Australian. His job, however, was far from over. The obdurate Worrall, meanwhile, lost his concentration and was almost caught off Briggs; the Lancastrian then went on the defensive, particularly against Darling, placing more men on the boundaries: it did not matter, as Darling cut him for two more boundaries.

Darling batted on at breakneck pace with the reliable Worrall for company; Worrall brought up his fifty off Hirst, and a run later, hit one in the air off Jack Mason: Ranji grassed the sitter at short mid-off. The cheer was so loud that Storer and Richardson lay down on the grass, refusing to resume till the noise had subdued.

Worrall was never the same batsman again, and his persistence ended when he hit Hayward to mid-on where Hirst completed a low catch; the pair had added 193 runs in 121 minutes, and the stage was set for Australia to pull off the finishing runs as Syd Gregory walked out after tea.

Before the dismissal, Darling had reached his 150: now, trying to hit Richardson with the aim to finish things off quickly, he edged one off Richardson and was caught brilliantly by Wainwright at slip. His 160 had come in 171 minutes and had included 30 fours. It was also Richardson’s 10th wicket of the Test: he had finished with 10 for 204.

Gregory and Noble went for the remaining runs quickly and at 4.52 in the afternoon, Noble brought up the winning runs off the bowling of Richardson as Australia won the series 4-1.

–  Darling led Australia to England in 1902; during a short 52 in the Old Trafford epic, he cleared the ground twice more, thus becoming the first man to hit a six in a Test on English soil as well. 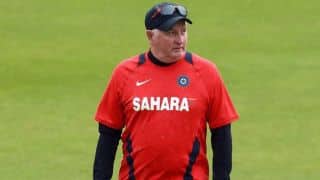 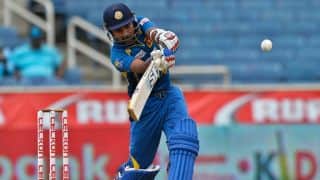