Ashes 1930. Don Bradman ended his miraculous bout of run making in the series with a double hundred at The Oval and took his aggregate to 974 runs in five Tests. Arunabha Sengupta looks back at the method and effects of this supreme feat. 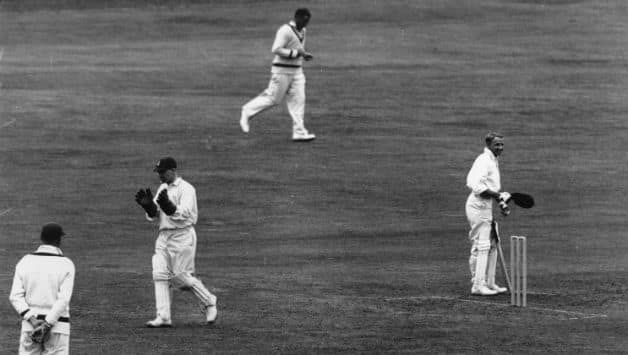 Don Bradman (right) acknowledges the cheers of the crowd on reaching his triple century, enroute to a record 334 at Headingley against England on July 11, 1930 © Getty Images

Ashes 1930. Don Bradman ended his miraculous bout of run making in the series with a double hundred at The Oval and took his aggregate to 974 runs in five Tests. Arunabha Sengupta looks back at the method and effects of this supreme feat.
On the fourth day at The Oval, Don Bradman ended his phenomenal batting feats of the series with a double hundred, his sequence of scores being eight, 131, 254, 1, 334, 14, 232.

His aggregate for the series stood at 974 — something that has not been passed to this day. It was a curious coincidence that on the fourth day, August 20, as Bradman was rewriting the history books, Charles Bannerman, the first ever centurion of Test cricket, passed away — secure in the knowledge that the torch of batsmanship would burn bright for years.

In England, the old master, Jack Hobbs, in his 48th year was preparing to end his great career. The Daily Herald observed, “Bradman is ready to wear [Hobbs’s] mantle. This mere boy is leaving behind records on which we thought any cricketer could safely rest.”

The end of the series arrived as a relief for the scribes whose unenviable task was to concoct adjectives to document The Don’s monumental deeds. All the generation of writers, who had gushed at minor heroics in the county circuit, found themselves face to face with feats of the bat that strained their imagination and pens. The sporting vocabulary had to be recalibrated to make room for the enormous chasm between Bradman and the others.

At Leeds, Trevor Wignall of the Daily Express resignedly considered how Bradman’s remarkable run had affected him and his colleagues: “Bradman, indeed, has become a menace to the gentlemen of the Press. Even with four dictionaries at our elbows, he leaves us gasping. I am almost inclined to suggest, much as I like him, that he be deported to his own country and kept there.”

Wignall also recorded a bit more significantly, “And I am tempted to say also that today he is the greatest athlete or sporting figure in the wide world. If this is doubted please tell me who can be compared with him.”

Plum Warner was also as effusive in The Morning Post: “Bradman is such a wonder that if he was batting on the tramlines of Vauxhall Bridge Road he would make a hundred and probably three hundred. He has already attained immortal fame and must be a tremendous influence on the future of the game. One trembles to think what lies in store for bowlers in the next 15 or 20 years.”

When Bradman had played his debut series in 1928-29, scoring 468 runs in four Tests with two hundreds, PGH Fender had voiced some caustic criticism — words that he would have to gulp down all his life. ‘Bradman wouldn’t get a run in England,’ had been his infamous and rather ill-advised assessment. Now he was forced to concede that Bradman was “an enormously improved player as compared with 1928-29, and has already made his place among the great ones of the game. Until we saw Bradman this summer, I do not think any of us realised that it was possible to be so really brilliant without taking risks. I know of no English batsman today who is capable for any long period of forcing runs against Test bowling at such a pace, without taking risks which one knows will, sooner or later, get him out.”

An analysis of miracles

The runs had hurtled at 40 per hour from the bat of The Don, and all this in spite of his not hitting a six in the entire series. The following table shows his dominance over English bowlers. His mastery over Harold Larwood is particularly revealing in the context of how things turned out in the 1932-33 series.

The Lord’s Test of 1930 was in many ways the watershed moment of Ashes history as Bradman stroked his way to what is considered to be the best innings of his sublime career. Australia had lost the first Test and faced a total of 425 in the second. From the summer of 1926, they had won just one Test and lost six to England. The Bradman effect kick-started with the 254 he made that day and from that moment on till the retirement of the great man in 1948, the two countries would play 33 Tests of which Australia would win 16 and lose just eight.

It was as if to salute this epochal moment of history, Bradman adorned it with an innings as close to perfection as possible. By the time he passed 300 in a day at Leeds, he had already fashioned a new course in cricket chronicles.

The Morning Post wrote during the Lord’s innings, “Bradman is a sort of reincarnation in miniature of Grace in his youthful prime.”

By the time the tour was over, another writer quipped, “Bradman made the Wisden’s Almanack look as out of date as a fashion book of the naughty nineties.”

The farewell banquet given by Sir Kynaston Studd at the Merchant Tazlors’ Hall in Threadneedle Street was attended by shining lights of the past. Lord Harris and KS Ranjitsinhji both made speeches during the dinner. However, the show was stolen by the author Sir James Barrie, creator of Peter Pan and the most enthusiastic of recreational cricketers.

Puffing at his cigar throughout, Barrie jested in his bewitching accent, “When the Australian team return home they will be met by countless thousands of Australians … there will be tremendous rejoicings. The team will be taken to hotels and public places and feasted — all with the exception of Mr Bradman. He has carried this plan of his of not knowing how to get out to such an extent that he now cannot get out of anything. He won’t be able to get out of the ship when all the others are merry and bright. We now leave him pacing the deck, a dark and gloomy figure.” 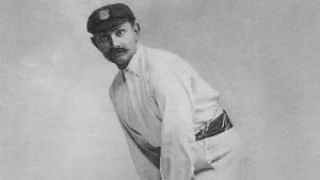