It was also Don Bradman's first Test as captain.

December  9, 1936. In Don Bradman’s first Test as captain, Australia collapsed spectacularly in their second innings, losing to England by 322 runs. Arunabha Sengupta looks back at the day when rain and a sticky wicket conspired to skittle Australia out for 58.

It was Don Bradman’s first Test as captain, and it ended in a spectacular rout of the Australians — much of it conspired by the elements.

On paper the destroyers were Gubby Allen and Bill Voce, the two remaining pacemen of the Bodyline brigade of 1932-33. However, there was nothing lethal about the cricket on the final day except for the wicket — rendered a sticky glue by the rain.

While he never lost a series as captain, Bradman did confess to losing a great deal of sleep.

Till 1935, the genius wanted to be left alone to score runs. He was a boy prodigy, looked after by the older men in the side. Bradman had played blissfully for New South Wales under Alan Kippax. When Kippax was absent, Bert Oldfield had led and Bradman had scored his tons and tons of runs. For Australia, he had been perfectly content to go out there and crack hundreds under Jack Ryder and then Bill Woodfull.

When he had deputised for Woodfull in England,1934, he had found it a trying experience. In fact, the stress and anxiety related illness that nearly killed him shortly afterwards was at least partly caused by the pressures of being at the helm.

It was business that finally coaxed Bradman into the job. When Harry Hodgetts lured him to his Adelaide stockbroking firm on a six year deal of £700 a year, captaincy experience was part of the offer. Local hero Vic Richardson was displaced as the South Australian skipper and Bradman took over. It was not a very popular decision and strangely not a thrilling one for Bradman either. He accepted the role with resignation rather than eagerness.

Of course, he was still Bradman. In his first Shield game as captain, he scored a century. In the next he hit 233. And in his third he piled 357.

When Richardson retired, Bradman gave the indication of some additional weight off his shoulders, celebrating with 369 against Tasmania.

When Allen’s Englishmen visited in 1936-37, he was ready to take on the mantle of the Australian captain. And in the opening Test at Brisbane, for the very first time he walked out to toss for his country.

The Englishmen had not really impressed during the tour. The team had looked rather less than formidable.

There was no Harold Larwood — who had terrorised Australia during the Bodyline series four years earlier.

Only one man had averaged more than Bradman in an Australian season from 1928-29 to 1937-38. During the Bodyline tour, Herbert Sutcliffe had eclipsed Bradman’s 1171 runs at 61.63 by scoring 1318 at 73.22. That rock at the top of the England batting order was no longer present. The English team struggled to find a suitable opening combination.

There were indeed the menacing Voce and the prolific Wally Hammond. But overall the side seemed to lack balance and genuine quality.

Besides, the tourists had not really excelled in the tour matches. Every leg-spinner in the land, however obscure and unknown, had found them out.

For South Australia, Frank Ward had captured ten wickets, troubling every batsman but Hammond. For Victoria, Jack Frederick had taken 6 for 65 and 2 for 10.For New South Wales, Harold Mudge picked up six for 42 in the first innings, before the great Bill O’Reilly settled the issue with 5 second innings wickets. And finally, bowling for an Australian XI, Arthur Chipperfield ran through the English innings with a career-best haul of 8 for 66.

Laurie Fishlock, Joe Hardstaff Jr, Arthur Fagg — all the young batsmen supposed to be the faces of England’s future, had shown remarkable ineptitude against this form of bowling. It seemed more and more inevitable that the side would capitulate against the top quality leggies of the Australian Test side.

However, one other significant event took place during the game at Adelaide against South Australia. Clarrie Grimmett, bowling alongside Ward, managed to pick up just two wickets.

The lack of success of the great leg-spinner could not be attributed to Bradman’s captaincy in any way. True, Grimmett’s differences with Bradman were well known, but the legend did not even play the game. In fact, Grimmett’s long-time captain Richardson himself led the side. And the contrast in the results of Grimmett and Ward meant that Bradman did have the necessary numbers to argue for the latter in the Test in place of the older leg-spinner.

It was a move that ended Grimmett’s career and left his spinning partner O’Reilly fuming. Did it influence the result of the match? There is very little evidence that suggests so.

The Test could not have got off to a better start for Bradman and Australia.

A thunderstorm threatened and the wicket was lively. After Allen won the toss and took first strike, Ernie McCormick made the ball fly. Stan Worthington was dismissed with the opening delivery of the Test, Fagg followed after a protracted struggle and the great Hammond also perished first ball. England staggered at 20 for 3.

However, crisis specialist Maurice Leyland was an excellent man to come in at this juncture. Besides, McCormick unfortunately succumbed to an attack of lumbago. He walked off the ground after 8 overs which got him three for 26. Bradman was left without his spearhead.

In the end England’s total of 358 was more than satisfying after the disastrous start. O’Reilly persevered gamely as ever, claiming 5 for 102, refusing to allow batsmen to get on top of him. At the other end, Ward’s inexperience at this level showed time and again as he finished with 2 for 138.

Australia began their response well enough, reaching 151 for 2 at the end of the second day. But in the final session, Voce had made the lethal dent, getting Bradman caught at gully for 38.

Still, Jack Fingleton was batting with a lot of confidence carried over from his South African success. Stan McCabe did look good during his stay at the wicket. There were optimistic predictions, laced perhaps with partisan wishful thinking, that Australia would score 500. So, Allen’s men were not totally at ease as they relaxed during the restful Sunday.

On Monday, however, the game changed completely.

Fingleton did carry his fine innings to become the first man to score four hundreds in consecutive Tests. But, Voce struck again and again for England, angling the ball across the batsmen and moving them away. With Hedley Verity blocking one end with his impeccable line and length, Voce ran through the rest of the batting. The last 6 wickets fell for 32, and the hosts ended with 234 — conceding a lead of 124.

When England batted again, progress was slow, almost agonisingly. But, Allen the batsman was a revelation. He neutralised O’Reilly with some masterly application, holding the innings together, sharing useful partnerships with Hardstaff and Verity. Once again, most of the batsmen made useful contributions as the captain held one end intact. England were all out with just half an hour left to play on the fourth day, the target a steep 381.

In the second innings, Ward was successful, picking up six wickets. When he turned one past Hardstaff and Oldfield whipped off the bails, the popular Australian stumper went past Dick Lilley’s record of 84 dismissals.

Clouds loomed and a thunderstorm threatened as Australia started their second innings. There were five appeals against the light before the umpires finally stopped play.

Fingleton, hero of the first innings, was bowled by Voce first ball. Jack Badcock and night watchman Morris Sievers saw off the rest of the day and the score stood at three for one at the end of Day Four.

And then there was rain; almost all through the night. And the raindrops were nothing short of nightmarish for the Australian captain as he lay in bed that night.

By the time the last showers had lashed across Brisbane at 6 in the morning, the wicket had been transformed into a sticky pudding. In any case, even if it had not rained, Australia would have been hard pressed to save the match. Now, with the pitch rendering batting well-nigh impossible, Australia suffered a spectacular collapse.

Allen got Badcock with his second ball of the day. As the opening batsman walked back, Bert Oldfield was seen walking in as a sacrificial lower-order batsman on this gluepot. It did not really help.

With the fourth ball of his second over Allen ended the resistance of Sievers. And two balls later, the Australian hearts broke as Bradman was seen walking back for a duck.

Voce and Allen bowled unchanged in the innings, taking just 12.3 overs to finish things off. The former ended with 10 for the match, and the latter enjoyed one of his best Test matches with a brilliant all-round show.

Bradman thus got off to a poor start both as batsman and captain. His field setting during the entire English second innings had been exemplary, good enough to choke a side in ascendency, keeping their rate of scoring down to a trickle. Few could find faults with his tactics. But showers and sticky wicket, forever the greatest of his foes, had spoilt the beginning of this new phase of his career. 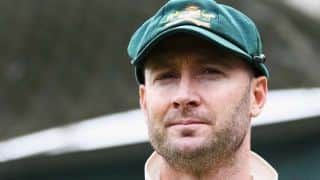