January 9, 1951. The Sydney Test came to an end with a big win for Australia and a dismal debut for Middlesex medium pacer John Warr. His nightmare continued at Adelaide as he became the owner of the worst career bowling analysis, a record that stood till 1985. Arunabha Sengupta recalls the miserable Test career of the young bowler.

Poor John Warr walked back disconsolately. It had been a nightmarish debut.

The torture for England had ended when the rookie pacer was rapped on the pads, clueless about the mystery spin of Jack Iverson. The demise of the innings had taken just 52.4 overs.

In the morning, Warr had been manhandled by Keith Miller. The great all-rounder had already harassed and claimed Len Hutton in the first innings, along with Denis Compton, Reg Simpson and the unfortunate Warr. And when play started on the fourth day, he had been almost merciless after his steady accumulation on the third afternoon. Miller had blasted the bowling to end with 145. Warr had finished with horrendous figures of none for 142 from 36 overs.

Australia s lead had stretched to 136. Helpless skipper Freddie Brown had resorted to his leg-breaks and the ball had turned ominously. It had been difficult to fathom who had been happier with the four wickets he had captured, Brown or his opposite number Lindsay Hassett.

Indeed, Iverson had been brought on early and immediately he had Hutton in all sorts of trouble. Cyril Washbrook, never a man to treat spinners with importance, had little idea about the flicked off-breaks and the occasional straight balls. Iverson made them hasten from the pitch and turn sharply, bouncing on occasions. Hutton had been caught by Don Tallon after he and Ian Johnson had juggled with the ball. Reg Simpson had followed soon and Washbrook had not lasted too long either. Only Denis Compton had resisted for over 100 minutes, but the writing had been clear on the wall.

With Warr falling with time to spare on the fourth day, England lost by an innings and 13 runs and thereby lost the series. Australia were already 3-0 up after the third Test.

Warr s misfortunes did not end with his debut. At Adelaide, Arthur Morris roared back to form with a patiently compiled 206. Doug Wright and Ray Tattersall restricted Australia to 371, but Warr s efforts remained uniformly fruitless. His 16 laborious overs produced 63 runs without anything on the wicket column.

There was a turn of fortunes when England batted. Hutton did produce a superb innings of unbeaten 156, carrying his bat as the rest of the men crumbled around him. Poor Warr was bowled by Bill Johnston for a duck.

When Australia batted again, Neil Harvey and Miller added 99, and then Miller and Jim Burke 87. At the end of the fourth day, Australia were 281 for five, England staring at a 4-0 deficit, and Warr still wicketless. The Middlesex bowler did not even have a maiden to show for his efforts.

However, there was at least one sympathetic soul. On the following morning, Johnson, the Australian off-spinning all-rounder, ensured that the persevering man had at least one wicket to his credit. He got the thinnest of edges which went to Evans, and he walked even as the umpire remained unmoved.

In Johnson s words, I got the faintest of faint touches and Evans went up, half-heartedly. John followed him, but the umpire said not out. Well, I saw John s shoulders sag, and he looked so crestfallen that on the spur of the moment I nodded to the umpire and walked. It s the only time I ever did it, I can tell you, but it seemed in keeping with the spirit of the game.

Warr ended with one for 76 from 21 eight-ball overs. No batsman was kind enough to grant him a maiden, though. England lost by 274 runs, the end coming as a cycle of good karma with Johnson castling Warr for a duck.

It stood as an unenviable record till Roger Wijesuriya of Sri Lanka ended his four-Test career in 1985 with 1 wicket for 294 runs. The left-arm spinner also managed to better Warr s strike rate of 584 by 2 additional deliveries. 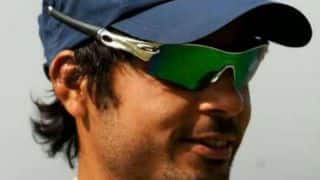