September 1, 1981. End of a magical series with a rather subdued final day at The Oval.  Arunabha Sengupta remembers the final Test match of the magnificent 1981 Ashes which saw Mike Brearley and Allan Knott play for England for the last time in their careers. 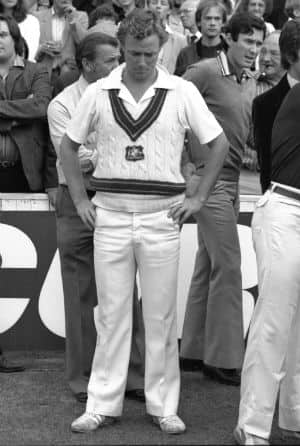 Captain of Australia, Kim Hughes is dejected after losing the Ashes 1981  © Getty Images

September 1, 1981. End of a magical series with a rather subdued final day at The Oval.  Arunabha Sengupta remembers the final Test match of the magnificent 1981 Ashes which saw Mike Brearley and Allan Knott play for England for the last time in their careers.
The electrifying series full of miracles did not quite end in the same spectacular high, but the final Test match did have its moments.

Of course, one of the major highlights was inevitable. That summer, Ian Botham could not be kept out of the headlines. Having performed miracles at Headingley and Edgbaston, and after following it up with another match-winning hundred at Old Trafford, in the final game he ran in to capture ten wickets. When Rod Marsh, having scored an entertaining fifty in the second innings after being dropped twice by Alan Knott, fended one for Mike Gatting to take a catch over his shoulder, the all-rounder scalped his 200th Test wicket.

Landmarks were plentiful all through the match, but the irony of the moment was perhaps lost in the applause and has been forgotten down the years. Yes, Mike Brearley did finish his career without losing a single Test in England as skipper. However, for a great captain and an ordinary batsman, the final Test of his career was a curious aberration. He erred heavily by putting Australia in on a true wicket and saw them run away to 120 before losing a wicket. And on the last day did, he did his bit with the bat to take England to safety.

In the first ever sixth Test played in a series in England, Graeme Wood and Martin Kent did benefit from Brearley’s misjudgement to rattle off a century opening stand for Australia — the country’s first in over four and a half years.

It was left to Botham to get both the openers, and clutch Graham Yallop over his head at third slip to bring parity back in the match by tea. Hounded skipper Kim Hughes started timing the ball well before his terrible run of luck got better of him yet again. While essaying a pull off Botham, he dislodged his own bail.

It was Allan Border who held the innings together, taking it well into the second session of the second day, ending with an unbeaten 106. In picking up four wickets, Willis went past Wilfred Rhodes’ record 109 wickets against Australia. For the third time in the series Botham captured five wickets in an innings.

England’s response was rather uninspired. When a Dennis Lillee leg-cutter had the promising Wayne Larkins caught in the slips by Terry Alderman, the spark went out of the innings. Geoff Boycott and Chris Tavare crawled painstakingly for the rest of the second afternoon to end the day at 100 for 1. The full house on Saturday saw Boycott reach his world record 61st half century off the first ball of the day and then take his own time to compile his 21st Test hundred. 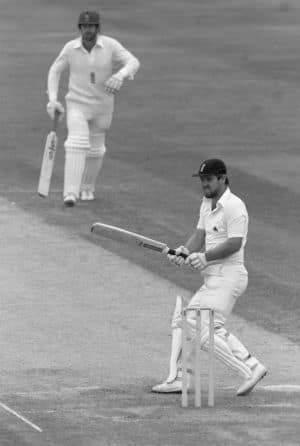 Mike Gatting scored 53 and 56 at The Oval © Getty Images

With Gatting in excellent mettle, England seemed poised for a big score at 246 for 2 when life was suddenly infused back into the Test. Lillee ran in with the new ball, and Gatting, padding up once too often, had his stumps pegged back. With Paul Parker making his debut, as a replacement for David Gower, Brearley promoted himself in the order to protect the newcomer. However, he got an early nasty delivery from Alderman. Parker himself followed a wide ball to be caught in the slips. And minutes later Botham was snared by Lillee.

Some characteristically gutsy cuts and drives by Knott brightened the proceedings, but Lillee produced another superb delivery to induce Boycott into a false stroke and Graham Yallop held a blinder at gully, high, wide and one handed. The Yorkshire opener had batted for 441 minutes for his 137.

Knott flung his bat about for a few more runs before becoming Lillee’s seventh victim, the first time the great Australian fast bowler had captured seven in an innings. After having played second fiddle to the fantastic Alderman for most of the series, Lillee was back in the lead role.  Australia had a slim lead of 38 runs.

In the hour that Australia batted, Brearley made as many as seven bowling changes in the fourteen possible overs, and by the end of the day England had sent back Kent and Hughes.

However, when play resumed on Bank Holiday Monday, the wicket remained true, Willis was off the field most of the day and Botham less than fully fit. Dirk Wellham, making his debut after John Dyson had been dropped and Kent pushed up to open, made most of the situation. Dropped at mid-on at 18, he raced to 80 from less than 90 balls before his strokes dried up in a surfeit of cramps and nerves. From the pavilion, Hughes supposedly sent him instructions to take his time as the series was already lost. Wellham crawled through his 90s, and was dropped by Geoff Boycott at mid-off when on 99. Finally he scratched his way to becoming the second Australian to score a century on debut in England after Harry Graham had done it in 1893. Yet, voices spoke for long about how his hundred had robbed Australia of a win. Botham and Mike Hendrick did restrict the Australians to 344 for 9 by the end of the day, the all-rounder in the process picking up ten wickets in the match. Hughes declared overnight, leaving England a day to score 383 to win.

The hosts were never going to make an attempt, but when Lillee brought one back to trap Boycott with the fourth delivery of the innings; it seemed Australia could snatch a victory. Young Mike Whitney got rid of the tediously adhesive Tavare. Gatting counterattacked for 50, but when Lillee had him caught in the in-field, England had slumped to 104 for 4. When Parker and Botham fell to Alderman with almost three hours remaining, Australia’s chances of snatching a consolation win looked bright.

However, it ended in a chorus of romantic swansongs for two sterling England cricketers. Brearley, never a Test class batsman all his career, now stuck around for 166 minutes to bring up just his ninth Test fifty in the 66th and last Test innings. At the other end, Alan Knott, also playing his final Test innings, essayed the final of his many invaluable rear-guard gems.

In the eighth of the 20 mandatory overs, Brearley fell to the famed Marsh-Lillee combination and received a wonderful ovation as he walked back, undefeated in England in his 19 Tests as captain. Knott remained unbeaten and happy as he walked back at the end of the drawn match with 70 excellent runs. Lillee finished with 11 wickets in the match.

The other hero who walked off the ground was Terry Alderman, with 42 wickets in the series, the highest since that summer of 1956 when Jim Laker had spun a web around 46 batsmen. Yet, he had to end up in the losing side and would have to wait eight years to bowl Australia to a win in England.

Botham, with 399 runs and 34 wickets in the summer was the unanimous choice for the Man of the Series. Little surprise that, given that the series has gone down as Botham’s Ashes.