On January 10, 1987, Peter Taylor made his debut for Australia. When the selectors announced his name for the final Ashes Test at Sydney, commotion ensued as the journalists were certain that the selectors had erred. "Peter who?" they asked. Karthik Parimal revisits the fixture that saw Taylor slice a piece of history for himself with a performance to silence the naysayers. 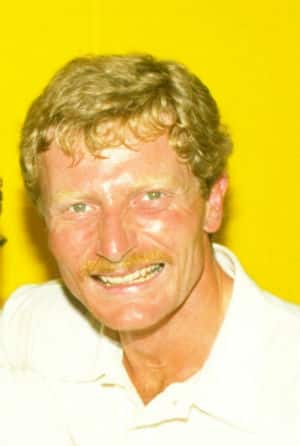 On January 10, 1987, Peter Taylor made his debut for Australia. When the selectors announced his name for the final Ashes Test at Sydney, commotion ensued as the journalists were certain that the selectors had erred. “Peter who?” they asked. Karthik Parimal revisits the fixture that saw Taylor slice a piece of history for himself with a performance to silence the naysayers.

For the second consecutive time, the Australians meekly surrendered to England in the battle for the urn. Having drawn first blood at Brisbane, the English rowed to safety in the Perth and Adelaide Tests before delivering the deathblow in Melbourne with an innings victory. So livid were the Australian powers that be, that despite the annihilation and the series already being out of reach, they were determined to ring in multiple changes and bow out on a high in the final Test at Sydney. The axe was duly dropped on David Boon, Greg Matthews and Craig McDermott. Since Boon was discarded, another specialist opener was expected to occupy his spot.

A certain Mark Taylor had been plundering runs for New South Wales in First-Class cricket that season, and his name was touted to pop up when the selectors met to pick the squad. When it was revealed that Greg Ritchie, Dirk Wellham and Peter Taylor had made the cut instead, pandemonium ensued. The journalists were certain that the selectors had picked the wrong Taylor and the media was relentless in pursuing that line. “Peter who?” they asked. “Why would a player with only six domestic games under his belt (only one in the 1986 season) be chosen ahead of Mark Taylor, the prodigy?” they justified their presumption.

The fact that Peter Taylor was already 30 also weighed against him. Nevertheless, his (extremely) brief stint with Sydney’s Northern District club was enough to convince Greg Chappell, one of the selectors at the time, that his temperament and type of bowling could be handy on the surface at the Sydney Cricket Ground (SCG). As a result, on January 10, 1987, Taylor took field for Australia for the first time in the final fixture of the Ashes, and by the end of that match, he was no longer an unknown entity in cricketing circles.

His set of detractors notwithstanding, one knew Chappell had a good eye for talent and that his choices often hit the mark. The Australian players, however, had to wait a day longer to get a glimpse of what Taylor was worth. Having won the toss, Allan Border chose to bat first and, despite the initial hiccup, his cavalry put 343 on the board, riding primarily on Dean Jones’s scintillating unbeaten 184. The knock wasn’t flawless as Jones had survived early in his innings through an umpiring farce. “Dean Jones was the best non-walker I’ve ever seen because his reaction never gave any inkling as to his guilt. He just scratched centre, adjusted his pads and carried on in a ‘business as usual’ fashion. His method worked beautifully in this innings, as he quite obviously nicked one before he’d scored a run, but was given not out by umpire Steve Randall,” writes Steve Waugh on Jones’s ton in his autobiography Out of My Comfort Zone.

England’s start to the innings was catastrophic. Merv Hughes got rid of the opening pair of Chris Broad and Bill Athey — the two had been a thorn in the flesh of the Australian bowlers throughout that series. Bruce Reid shot out skipper Mike Gatting and, at 17 for three, the English were on tenterhooks. Thereafter, Allan Lamb and David Gower embarked on the road to recovery and looked impeccable with a 72-run partnership. Enter Taylor, who, with a short and wide delivery, bagged his first Test victim in the form of Lamb. It was a ball that perhaps didn’t deserve a wicket, but it certainly did open the gates for plenty more.

Twenty runs later, Taylor had Ian Botham caught by Geoff Marsh. Gower, after a well-paced 72, too, succumbed, holing out to Wellham. With three top-order wickets, Taylor warmed up to the Sydney crowd. Border persisted with his star off-spinner that day, and once Reid dismissed Jack Richards, Taylor polished off the tail with scalps of Phil Edmonds, Gladstone Small and John Emburey. England’s innings closed shut on 275 as Taylor, on a fairly fast track until that juncture, finished with figures of 26-7-78-6. Not many would have been more pleased with this performance than Chappell, who was sure to draw enough flak had the move misfired.

On the fourth day, the surface turned haven for spinners. This enabled Emburey to pluck seven wickets as Australia folded for a below-average total of 251. The first innings deficit meant that England now required 320 to go 3-0 up in the series. On the final day, they galloped to 91 for one and looked well on course for a victory, but Taylor was to inflict further damage in that match. Border had Gower caught by Marsh in the slip cordon and Peter Sleep broke through Athey’s defences soon thereafter. A few runs later, Taylor’s off-break flummoxed Lamb, yet again, but the icing on the cake was bagging Botham the very next delivery as England plummeted to 102 for five. Four wickets had fallen in just eight overs.

Gatting and Richards resurged handsomely with a 131-run stand, but once that partnership was broken, the lower-order crumbled and defeat was conceded by 55 runs. The outcome didn’t strip England off the urn, but the series now ended on a respectable note and margin (1-2) for Australia.

Taylor was Australia’s undisputed hero in that match. Match figures of eight for 154 propelled him to limelight. In due course of time, however, he’d go on to become an asset in One-Day Internationals (ODI) for the side. 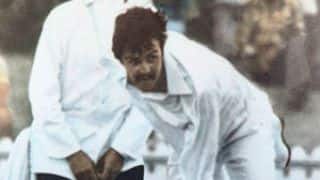