On July 5, 2001, a hurricane 10th-wicket stand between Alec Stewart and No. 11 Andy Caddick saved England the blushes at Edgbaston. However, Michael Slater and Matthew Hayden were in an equally punishing mood, resulting in a whopping 236 runs being scored in the post-tea session. Jaideep Vaidya recounts that exhilarating day of Test cricket.

It was the beginning of an optimistic summer of cricket for England. They were undefeated in their last five Test series, including a historic series win over the West Indies after 31 years. Thus, when Steve Waugh‘s Australians came touring for the Ashes, the host nation was optimistic, even though they had not tasted an Ashes victory for nearly 14 years. Australia, meanwhile, were also coming after taking part in a historic series, although they had ended up on the losing side. India, thanks to the terrific duo of VVS Laxman, Rahul Dravid and Harbhajan Singh, had ended their 16-match unbeaten streak in Test matches in the cauldron that was the sub-continental summer. Waugh and Co could do with a win, and who better to target other than their oldest rivals.

For the first Test at Edgbaston, England were forced to rest a few players from their squad of 14 due to injury; Graham Thorpe was out with a calf strain, Michael Vaughan‘s knee had ruled him out while Mark Ramprakash was hamstrung. Thus, Mark Butcher, Ian Ward and Usman Afzaal were roped in. Luckily, Craig White and Ashley Giles had just about returned to match fitness after having missed the recent series against Pakistan. As for Australia, they popped a surprise by benching the out-of-form Justin Langer and promoted Ricky Ponting to No. 3, with Damien Martyn getting his 12th Test cap in a career stretching more than eight years.

Waugh called right on the first morning and put England in, which was an unusual and rather bold decision on the first morning of the Ashes. “I think Steve Waugh felt that because Ian Ward and Usman Afzaal were in the other team, they had a bit of inexperience in their line-up and it might be a good idea to try to put them under pump straight away,” wrote Jason Gillespie in his autobiography Dizzy. Gillespie picked up the wicket of Marcus Trescothick with his very first ball, but after that Mike Atherton and Butcher made Waugh rue his decision for the entirety of the first session as they took the score to 106 for one with an over to go for lunch.

This was when Waugh brought Shane Warne into the attack, and the Australian trump card struck straight away as he found Butcher’s pad-bat that was snapped up by Ponting at silly mid-off. The wicket would trigger a collapse in the post-lunch session as England lost 5 for 85 to take tea at 191 for 7. That would soon become 191 for 9 as Warne went on to record his 17th five-wicket haul in Tests and fifth against England (5 for 71). This was when No. 11 Andy Caddick joined wicketkeeper-batsman Alec Stewart in the middle.

It was here that the fireworks began. Stewart needed someone to stick around with him while he did the scoring and took England to a safe total. When Caddick walked out, everyone expected Australia to come out to bat very soon. However, Caddick had clearly gulped down some magic potion, or stolen one of Matthew Hayden’s bats, because the way he batted in that last session was like never before. Stewart recalls in a column for ESPNcricinfo: “just when it looked as though we might be dismissed for less than 200, Andrew Caddick came in at No. 11 to play the innings of his life. When he arrived at the crease I urged him to be positive, not simply blocking, and my word how he responded! He cracked the bowling to all parts of the ground; it was the perfect innings for the situation, and the Edgbaston crowd loved every minute. From my point of view I was very pleased not to be left stranded on 20-odd not out; it was nice to get some runs and with Caddy blazing away at the other end, I had the chance to play a significant innings of my own.”

Caddick was one short of what would have been a memorable maiden Test half-century when Stewart was adjudged leg-before to Glenn McGrath for 65. England’s No 11 had to reluctantly walk back to the pavilion stranded on 49 that had come off only 40 balls, including 7 fours and a six. With an average of 3.56 from his last 18 innings, it was an amazing display of hitting by Caddick, one that was well appreciated by the Edgbaston crowd. The duo’s partnership of 103 runs from 76 balls had ensured that England almost touched the 300-mark, a scenario that looked inconceivable when Warne was working his magic.

Stewart and Caddick broke multiple records, as was highlighted by the BBC after the game:

“It was the highest 10th-wicket partnership in Test cricket since October 1997, when Pakistan’s Azhar Mahmood and Mushtaq Ahmed put on 151 against South Africa at Rawalpindi, to equal the world record. Only once before had an England pair scored more than Stewart and Caddick for the 10th wicket against Australia in December 1903, when Tip Foster and Wilfred Rhodes reached 130 in a remarkable 66 minutes at Sydney. That mark still stands as England’s best for the final wicket in Test cricket. However, some might argue that this was hardly an authentic 10th-wicket stand since Foster was a fine batsman and Rhodes was not really a legitimate No 11.”

It was also the fourth-highest partnership by an English pair for the 10th wicket. Here are the top five:

The fireworks were not over yet. Michael Slater and Matthew Hayden had clearly not liked England’s last-wicket onslaught and wanted to negate whatever little advantage the hosts had gained by it. Right from the word go, Slater laid into the English attack as he hit Darren Gough for 4 fours in the very first over of the innings. Slater was merciless as he crashed the ball into the boundary, mainly targeting the off-side, on demand. Hayden, although not as aggressive as his partner, somehow kept up with the pace and helped Australia’s score race along close towards the 100-mark.

Slater soon brought up his half-century, which took him only 49 deliveries, before White took a spectacular one-handed catch at mid-wicket to dismiss Hayden (35 off 41 balls), ending a 97-ball 98-run stand. Gough had an appeal against Slater rejected as the umpire signalled a no-ball, but the Yorkshireman made up for it soon enough as he trapped Ricky Ponting leg-before to end the day’s proceedings with Australia on 133 for two, still 161 runs behind England. In all, 236 runs were scored in the final session at 6.84 an over. It brought to an end an exhilarating Day One where 427 runs were scored at an astounding rate of almost 5 an over.

– Steve Waugh, Damien Martyn and Adam Gilchrist all scored hundreds as Australia amassed a whopping 576 runs in their first innings. Gilchrist’s 152 came off only 143 balls, including 20 fours and 5 sixes. 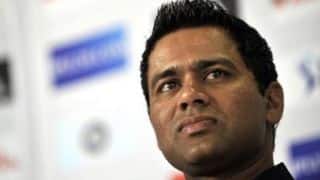