On August 4, 2001, Australia beat England at Trent Bridge to register their seventh Test victory in a row, a record back then, thereby retaining the Ashes in the process. Karthik Parimal goes back in time to remember the force Australia once was. On August 4, 2001, Australia beat England at Trent Bridge to register their seventh Test victory in a row, a record back then, thereby retaining the Ashes in the process. Karthik Parimal goes back in time to remember the force Australia once was.

The 2013 Ashes in England has followed a predictable path thus far England are two ahead of the Australians on the count and are touted to retain the Ashes, yet again. Prior to the commencement of the third Test, Australia suffered six successive defeats for the first time since 1984. Although highly unlikely, a defeat here at Old Trafford would make this current Australia team the first to lose seven consecutive Tests since 1888. Clutching at the last straws, that in one of the most coveted series, would have been unimaginable for Australia a decade ago. They were invincible, and were named accordingly.

Exactly 12 years ago, in the English summer of 2001, the Australians registered a record of seven Test wins in a row, thereby retaining the Ashes in the process. The tables have sadly turned now. Back then, it was England who were thumped in the first two Tests before trying to stand up to the might of the Australians in the third. That fixture at Trent Bridge showed just how ruthless Steve Waugh s men were. Albeit being down momentarily, they fought back like champions. “Victory at Trent Bridge was a testament to their resourcefulness, for England at two stages held the upper hand,” noted Wisden.

Michael Atherton won the toss and opted to bat first, hoping his unit would put up a better show than the one at Lord s (bowled out for 187 in the first innings) in the previous Test. In just the second ball of the first over, he was forced to delegate that task to his troops, for a rising delivery from Glenn McGrath hit him on the arm-guard and flew into the waiting hands of the second slip. The Australians appealed and the umpire obliged. The Nottingham crowd, understandably, made no efforts to hide their displeasure. Thirty runs later, McGrath bagged Mark Butcher to make matters worse for the hosts.

The only resistance came from the willows of Marcus Trescothick (69) and Alec Stewart (46) as the rest of the English line-up succumbed to their own frailties. The fact that the top and the middle-order all fell to catches sheds light on the batsmen s shot selections. McGrath, aptly nicknamed pigeon, took five wickets for 49 runs and, Shane Warne, the man who was expected to cause maximum damage, accounted for just two wickets, that of the lower-order batsmen in the form of Robert Croft and Alex Tudor. The English were shot out for 185, two less than what they could muster during the first innings at Lord s. 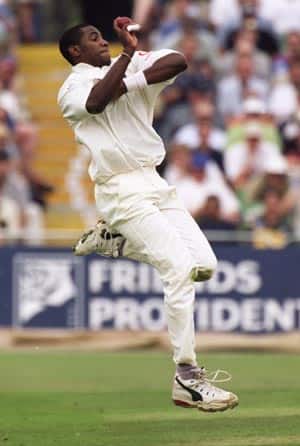 In the first Test at Edgbaston, Australia batted only once, during which they amassed a total of 576 owing to tons from Steve Waugh, Damien Martyn and Adam Gilchrist. That game was won by an innings and 118 runs. In the next fixture, they scored 401 and chased down a miniscule total of 14. Therefore, in perspective, it was expected they d pummel England after they put up just 185. However, the seamers, for the first time, proved their worth during that series. Alex Tudor, the right-arm fast bowler who d last donned the whites two years ago (in 1999), and who was a doubtful starter for the Trent Bridge Test owing to a side strain, took three wickets alongside Darren Gough and Andrew Caddick to push Australia to 102 for seven.

Gilchrist, though, blazed his way to a 59-ball 54 and, with Jason Gillespie s 27 giving him company at the other end, propelled Australia to a five-run lead in the first innings. Tudor finished with what was to be his only five-wicket haul in Test cricket, conceding just 44 runs. That bowling performance raised England s hopes, with few of the newspapers claiming that ‘the Ashes had suddenly come alive . The job was just half done, but it didn t take long for Australia to drag their rivals down to reality.

Atherton and Trescothick wrested momentum from the Australians with a 57-run opening partnership. The slide, however, commenced rather bizarrely. A full delivery from Warne was firmly swept by Trescothick, but the ball managed to hit a burly Matthew Hayden flush in the ankles before lobbing up. Spotting an opportunity from that ricochet, Gilchrist leaped forward to pluck it just inches above the ground. A referral to the third umpire confirmed Trescothick s walk back to the pavilion. (Replays showed Warne overstepping, but perhaps that was not a concern for the third umpires back then. A different ending would have ensued now.)

From 57 for one, England slumped to 127 for five, with Warne pocketing four of them two catches and one stumping, all by Gilchrist; one bowled. He then had Craig White caught by Steve Waugh to take his fifth scalp. It was then Gillespie s turn to wreak havoc. The swanky fast bowler trapped Ian Ward plumb in front of the stumps, shattered Croft s timber and had Caddick caught behind by Gilchrist. Warne then returned to dismiss the last man Tudor. The English were bamboozled for 162 as Warne finished with six wickets for 33 runs.

A target of 158, and that on a third-day wicket was seldom going to test the Australians. Even as Ponting was the second batsman to fall with the score on 72, it was set to be a cakewalk. But Hayden soon departed for a well-made 42 and, at 88 for three, a confident Steve Waugh strode out to finish the task at hand. He turned the first delivery behind square-leg and immediately felt excruciating pain in his left calf. It soon became evident that the injury wasn t a minor one and that he could no longer carry on with the innings. A stretcher was called to take him off the ground. “To be carried off on a stretcher is humiliating, especially when you re captain and about to retain the Ashes,” Steve Waugh wrote in his autobiography Out of My Comfort Zone. Steve Waugh is stretchered off the field Getty Images

Effectively 89 for four, the Australians were in a spot of bother and England sensed an opening, but Steve s brother, Mark Waugh, and Damien Martyn chased down the total nonchalantly, without any further hiccups. The news of Australia winning the Test by seven wickets and retaining the Ashes reached skipper Steve through a telephone call in the hospital.

Steve was out of the next fixture at Leeds which England won by six wickets. Nevertheless, he returned for the final game at The Oval and smashed an unbeaten 157 to help Australia win the series 4-1.