On August 25, 2001, Mark Ramprakash scored his second Test century after a decade in international cricket, on the same day Shane Warne reached a special personal milestone. Jaideep Vaidya takes you through the events. On August 25, 2001, Mark Ramprakash scored his second Test century after a decade in international cricket, on the same day Shane Warne reached a special personal milestone. Jaideep Vaidya takes you through the events.

It was a day of milestones at the Oval on August 25, 2001. The fifth and final Ashes Test of the summer was already going the visitors’ way, with Justin Langer and the Waugh twins scoring centuries to take Australia to a mammoth 641 for four declared. There was no way the Australians were going to lose the match, already leading the series 3-1. Academics and numbers was all there was to play for and two individuals from either side decided to make the most of it, in similar fashion but contrasting circumstances.

Shane Warne had come into the match on 396 Test wickets and a reputation of being one of the best leg-spinners in the world. Right from his first Ashes tour in 1993, he had the Englishmen’s number and dialled it with pleasure. Off his 396 victims, 107 were English batsmen. It was but obvious that he was going to reach the milestone of 400 Test wickets in the ongoing Test. As England came out to bat, Warne took the first three wickets to fall — Mike Atherton (13), Marcus Trescothick (55) and Mark Butcher (25) — to take his tally to 399, and England’s score to 104 for three. This was when Mark Ramprakash walked out to bat on Day Three to join his captain Nasser Hussain.

Ramprakash was almost in a last chance saloon. A prolific domestic record hadn’t translated into the international arena, for reasons perhaps unknown to the batsman himself. For all the calmness and serenity with which he played on the domestic circuit, Ramprakash always looked edgy and unsure of himself when playing for England. It was as if he did not have any belief in his own abilities. It took him seven years and 22 matches to notch up his first Test century, when he scored 154 against the West Indies at Barbados in 1998. But such was his talent that the selectors kept giving him chances in the first decade of his career, although their patience was running out.

Ramprakash was content with taking the backseat and letting Hussain take control of the scoring. When the captain fell for 52 to make it 166 for four, Usmaan Afzal came in and took over, with Ramprakash as happy as a clam in playing second fiddle. It was only when he lost Afzaal (54) and, later, Alec Stewart (29) that he decided to take over the reins. With the support of lower-order batsmen such as Darren Gough and Jimmy Ormond, after patiently crafting his innings for over five hours, Ramprakash finally brought up his second Test century by driving Warne elegantly through the covers for his 15th boundary; his century had taken 196 balls. As Ramprakash took off his helmet and raised his bat to the crowd in delight, the 18,000-strong Oval gave him a standing ovation, as did the Australians. Steve Waugh and Adam Gilchrist shook his hand, while Gough embraced him in a bear hug. 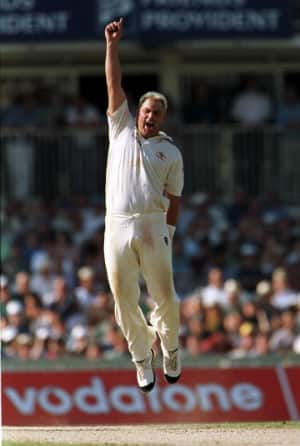 Meanwhile, Warne also had to wait over five hours on 399 before he reached his milestone. Stewart tried to guide the ball down to third-man, but could only edge it to Gilchrist behind the sticks. Warne thus entered the history books as the sixth bowler to take 400 Test wickets. Incidentally, Stewart was also his 150th and 250th victim. Warne wasn’t done yet; with the very next ball, he trapped Andy Caddick leg-before to record his 19th five-wicket haul in Tests. Although he did not get the hat-trick, Warne went on to take seven for 165 in the innings, even as England were bowled out 10 runs short of their follow-on mark. Warne stole the limelight, but Ramprakash was clearly the more relieved of the two.

“Scoring my second Test hundred, against Australia at the Oval in the final Test of the series, is another of the real highlights of my life,” wrote Ramprakash in his autobiography Strictly Me. “That 133, made after coming in at 104 for three and ending when I was eventually ninth out on the fourth morning of the match at 424 for nine, gave me a huge amount of pleasure. That Australian attack of Glenn McGrath, Jason Gillespie, Shane Warne and Brett Lee is one of the best quartets ever to play together at Test level… Looking back, it is a source of great pride that I managed to take that Australian bowling line-up for a hundred and, again, I believe that it goes a long way to answering the criticism of my suitability for Test cricket. There are plenty of highly rated batsmen from around the world who never scored a century against McGrath, Warne and company.”

·  Asked to follow on by Australia, England could only manage 184 in the second innings and lost the match by an innings and 125 runs. Australia won the series 4-1.

·  Contrastingly, Ramprakash kick-started a stellar career with Surrey, who he joined in 2001 after leaving Middlesex, scoring a hundred on debut for the South-East London county, and added more than 50 in the 11 years that he played for them. He became the 25th batsman in the history of the game to record 100 First-Class centuries.