On January 4, 2003, Michael Vaughan played "like God" at the Sydney Cricket Ground (SCG) to put England on course for a rare Ashes Test win. Jaideep Vaidya recaps that innings of the would-be English captain that won him fans across the globe and, perhaps, ignited the revival of English cricket. 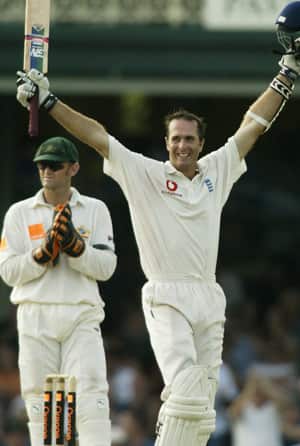 On January 4, 2003, Michael Vaughan played “like God” at the Sydney Cricket Ground (SCG) to put England on course for a rare Ashes Test win. Jaideep Vaidya recaps that innings of the would-be English captain that won him fans across the globe and, perhaps, ignited the revival of English cricket.
England had been abysmal, losing four Tests on the trot, albeit not unsurprisingly. The Australian side they were up against were at their very peak and had towered above the rest of the world over the turn of the millennium. England hadn’t won the Ashes in 16 years, and the way they were playing it did seem as if they would not get anywhere close for 16 more. The tour of Australia in the summer of 2002-03 had begun disastrously right from the word go when Nasser Hussain called it right at the toss at Brisbane in the first Test and inexplicably put Australia in on a belter. Matthew Hayden had then left no time in making England pay for their generosity.

As the teams arrived in Sydney for the fifth and final Test, with Australia leading 4-0, everyone expected a whitewash. Not since 1920-21 had a 5-0 result been established, and even though the dynamic duo of Glenn McGrath (side strain) and Shane Warne (shoulder) were both out injured for the match — the first such occurrence since 1992-93 — smart money was on Steve Waugh and company wiping the floor clean at Sydney.

This time, Hussain saw sense in putting his team in to bat first after winning the toss and was rewarded with a decent first-innings total of 362, riding on Mark Butcher’s century and Alec Stewart’s timely fifty. Australia responded with 363 thanks to a memorable and magical ton from Steve Waugh and an explosive one later by Adam Gilchrist. Honours were even by the time Marcus Trescothick and Michael Vaughan strode out for a second go in the post-lunch session on Day Three, both having failed in the first innings.

England lost Trescothick early again, who chopped back on to his stumps to give Brett Lee his 100th Test wicket. Butcher combined with Vaughan for what was looking like a solid partnership, before the Surrey batsman gloved on to short-leg off Stuart MacGill’s bowling in the final session, breaking a stand of 87. Out came the captain to join his star batsman Vaughan, who had already recorded two big tons in the series — 177 at Adelaide and 145 at Melbourne. Vaughan was, in Hussain’s own words, “playing like God” and had had a stellar 2002 in which he scored 1,481 runs in 14 matches at an average of 61.70, including as many as six tons — the highest being 197 against India at Nottingham.

England and Hussain needed Vaughan to deliver again to give them even a whiff of a win. Vaughan had already showed signs that he was in his groove. In just the third over of the innings, he had swivelled on his back-foot with the elegance of a ballerina and hooked Jason Gillespie for six — one of the best shots that you would ever see. He was driving, pulling and cutting with transcendent grace, like he had all series, and pounced on anything even half-loose. MacGill, who was overenthusiastic and eager to perform in his rare opportunity in the absence of Warne, was picked easily by Vaughan. Even the googlies from the leg-spinner could not stifle Vaughan’s concentration, who looked to be in zen.

Vaughan brought up his third hundred of the series soon after, with a flick off the pads to the mid-wicket fence off a short ball from slow-medium pacer Damien Martyn. It was an innings studded with 16 fours and a six and it was Vaughan’s seventh ton in the last 12 matches, taking his series tally to 563 runs — the highest by an Englishman in Australia since Geoff Boycott’s 657 and John Edrich’s 648 on the victorious 1970-71 tour. By the end of the day, Vaughan had helped England get to a lead of 217 with eight wickets still in hand, after sharing a still unbeaten 94-run partnership with Hussain (34 not out).
What followed

Vaughan dominated proceedings on Day Four as well, even as England soared ahead. Vaughan and Hussain’s stand finally ended on 189 after the latter edged Brett Lee to fall for a well-made 72 on what would be his last innings in Australia. Lee struck again after lunch to spark a mini-collapse of three wickets in five overs, before Vaughan’s six-and-a-half hour’s epic eventually ended via a contentious LBW decision from umpire Russell Tiffin off Andy Bichel’s bowling. Vaughan was out for a magnificent 183, coming from 278 balls and including 27 fours and a six. His series tally was capped on 633, miles above Hayden (496) who was second best.

“Vaughan’s stroke play was pure artistry,” reported a Sydney newspaper. Scyld Berry wrote in the Telegraph: “The Yorkshire opening batsman might not match his Australian counterpart, Matthew Hayden, for strength, but after his seventh hundred in his past 12 Tests Vaughan can look Hayden, Ricky Ponting and Steve Waugh in the eye and call them ‘mate’.”

England would declare their innings on 452 for nine with 20 overs remaining on Day Four, giving the Australians exactly those many to chase. Andy Caddick would then produce one of his most inspired performances with the ball and take seven for 94 to skittle the hosts for 226, giving England a rare and treasured Ashes Test victory. Vaughan was declared Man of the Match and Man of the Series for his efforts. “It’s been a tough Test match, and to be quite honest we were celebrating getting to the fifth day,” Vaughan admitted to the press, as quoted by the Guardian. “But to actually beat this side — they are a great team to play against — is a fantastic achievement and it shows we have a lot of character in that dressing room.”

Even as Australia celebrated their 4-1 series win, little were they to know that England would be so inspired by their show that they would carry the momentum from Sydney forward into the next Ashes series at home in 2005.