On December 2, 2006, records tumbled at the Adelaide Oval as the fire and ice pairing of Kevin Pietersen and Paul Collingwood came together and laid into the Australian attack. Jaideep Vaidya goes through the events of the day. On December 2, 2006, records tumbled at the Adelaide Oval as the fire and ice pairing of Kevin Pietersen and Paul Collingwood came together and laid into the Australian attack. Jaideep Vaidya goes through the events of the day.
“I just wish I’d gone on. You can never score enough, can you?”

No, you can’t; and especially if you’re Paul Collingwood.

It was the end of one of the best days the England cricket team had had in the Australian summer in recent memory. As the two teams trudged back to the pavilion of the Adelaide Oval after Day Two of the second Test of the Ashes, the visiting team was in a rare position of control. Just moments earlier, a short ball from a charged up Andrew Flintoff had found the shoulder of Justin Langer’s bat and was pouched by Kevin Pietersen in the slips. Australia had lost their first wicket in the dying moments of the day and were on 28 for one when stumps were called. More importantly, their deficit read 523 runs.

England had arrived on Australian shores on a confident and bubbly note, having subjected Pakistan to a 3-0 Test series loss at home. They were also coming as the holders of the Ashes, after having regained the urn a year and a half ago in what was labelled the greatest series of all time. However, in the first Test at the Gabba, the tourists were hit by a hurricane. The Australians romped home by 277 runs and set the marker for the series. They were hurt after 2005 and were baying for blood.

“Australia really attacked us,” wrote Pietersen in his autobiography Crossing the Boundary. “You could see it in their eyes. I knew straight away that they had changed. They had a completely different attitude to 2005. I think the tone was set pretty early on in Brisbane, and I think Australia wanted it much more than we did. You only had to look at them, to talk to them, to realise that. You could sense venom and passion in everything Australia did, and perhaps they didn’t have that in 2005. I knew straight away this series was going to be tough.” 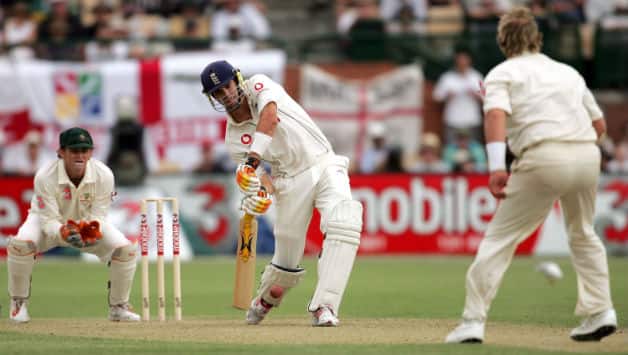 And so, when England named an unchanged eleven for the second Test at Adelaide, you expected some more grovelling by the hosts. The BBC‘s Jonathan Agnew described the decision as “disappointing but not astounding.” The disappointment mainly stemmed from the fact that Monty Panesar had been left out again and Ashley ‘Blame it on’ Giles had been given another chance. Flintoff won the toss and gladly elected to bat on what looked like a runs paradise for the first three days. However, England’s joy was soon to evaporate after openers Andrew Strauss and Alastair Cook fell cheaply to Stuart Clark.

Ian Bell then combined with Collingwood for a century stand before the former was bounced by Brett Lee which resulted in a mistimed hook that went high in the air and down the throat of the bowler. This is when Pietersen came to join his senior teammate in the middle. The duo had batted well in the first Test too, both missing out on tons in the second innings by a few runs. But in terms of batting styles, they were like fire and ice. Collingwood, never the awe-inspiring batsman, had carved his way to 54 off 124 balls when the wicket fell, playing along serenely in his comfort zone. Meanwhile, Lee welcomes Pietersen to the crease with another short ripper; however, Pietersen has all the time in the world as he says ‘Hello, Brett’ and pulls him to the deep midwicket fence for four.

What followed was a lesson in complementing your partner as Collingwood and Pietersen went about building England’s innings in their own typical ways. Pietersen took the attack to his Hampshire buddy Shane Warne, who was effortlessly driven and cut to the fence by English cricket’s next big thing. The psychological victory came when Warne switched to around the wicket to resort to the negative line of pitching the bowl outside leg. But the crafty pairing still found their way to milk the runs, with Collingwood making room to free himself and pulling the leg-spinner for consecutive boundaries. By the time the day ended, the 30-year-old had reached 98, while his 26-year-old partner was sitting pretty on 60. England had reached 266 for three and could rightly say the day was theirs.

England began Day Two knowing what had happened to them at the Adelaide Oval four years ago when they collapsed from 295 for four at the end of the first day to 342 all-out. However, Bell and Pietersen were not there at the time, and continued to play fearlessly on the second morning. Collingwood brought up his ton on the second delivery of the day that he faced and moved along. Pietersen, clearly in the groove by now, smacked a struggling Glenn McGrath for three boundaries in an over and, in the blink of an eye, found himself in the nervous nineties. Nervous, you say? Gimme a break!

Pietersen moved to 99 by whipping Warne down the ground for a boundary and then took three to via deep mid-wicket. His century was brought up in the following over as he grabbed a single off the bowling of Clark. It was the sixth ton of his career and second against Australia, after the memorable 158 at the Oval in 2005. Coincidentally, Pietersen went on to score exactly 158 this time as well, and this was the third time in his career that he had done so. It was an equally entertaining and swashbuckling knock as the one which clinched the Ashes in 2005, the only difference being that the golden mohawk had been shaved off for a buzz cut. The feature of Pietersen’s innings was his ownage of Warne, who in spite of constantly resorting to negative tactics of bowling around the wicket, was thrashed for 167 runs in 53 overs, and went wicket-less until he dismissed Geraint Jones later in the day. Meanwhile, Collingwood continued to frustrate the Aussies with a typically gritty innings. He was almost run-out on 109 when he pushed for a quick single to mid-on, but Michael Hussey missed the stumps with the throw. After that, Collingwood looked unbeatable and impeccable, and even out scored Pietersen in the afternoon session. He brought up what was a landmark double century — the first of his career — by launching part-time spinner Michael Clarke to the long-on fence. He thus became the first Englishman to score a double against Australia after Nasser Hussain at Edgbaston in 1997.

Unfortunately, the innings had taken its toll on him and he was dismissed soon after, for 206, via a tired edge to the keeper off Clark. And to think, the man who went on to record the 10th-highest individual score by an Englishman in the Ashes wouldn’t even have been there if Marcus Trescothick hadn’t returned to England before the series began with a stress-related illness.

The wicket, coming moments before tea, broke what was a record 310-run stand fourth-wicket stand. It was the highest stand for the wicket by an English pair against Australia, beating the 288 between Hussain and Thorpe at Edgbaston 1997. It was also the second-highest English stand for the fourth wicket after Colin Cowdrey and Peter May’s 411 against the West Indies at Birmingham 1957. It was a record fourth-wicket stand at the Adelaide Oval, beating Dean Jones and Allan Border’s 214 against the Windies in 1988-89.

Flintoff then came in and scored a quickfire 60 off 84 balls before declaring England’s innings after crossing 550. And after the England captain dismissed Langer early in Australia’s first innings. With the light fading quick in Adelaide, so were Australian hopes of producing a result for the game. Australia’s tale was highlighted by the figures of their two best bowlers, Warne and McGrath. Even though McGrath wasn’t at his 100 per cent due to  carrying a heel injury, he appeared a bit too hapless for everyone’s liking and returned with the most expensive figures of his career without taking a wicket — none for 107.

Australia recovered to score 513 in their first innings, via tons from Ricky Ponting and Michael Clarke. Collingwood then gave Australia another dose of his blocking and persisted with 22 from 119 balls, but couldn’t prevent England from collapsing to 129 all-out, thereby giving the Aussies an all too easy target of 168 runs. Despite his heroics, he could not prevent his side from slipping to an almost knockout 2-0 lead.

Man of the Match: Ricky Ponting

Dwayne Smith: Impact over aesthetics for the Mumbai Indians opener