On August 23, 2009, Andrew Strauss’s England team won the fifth and final Test at The Oval to clinch the Ashes 2-1. Nishad Pai Vaidya revisits that great day for English cricket. The picture of the Ashes 2009: Andrew Flintoff with his arms in the air after running Ricky Ponting out on what was the final day of the series © Getty Images

On August 23, 2009, Andrew Strauss’s England team won the fifth and final Test at The Oval to clinch the Ashes 2-1. Nishad Pai Vaidya revisits that great day for English cricket.
The tall frame of Andrew Flintoff stood with his arms in the air, with a look of triumph and vindication. His teammates ran towards him at mid-on to and gathered around him, attempting the near impossible task of lifting him off the ground. That was the picture of the Ashes 2009, where the star all-rounder would only stand upon a big event, sometimes even bending on one knee with his arms spread in the air. This time, he may have turned the crucial fifth and final Test at The Oval with a display of magnificent fielding. Ricky Ponting sprinted across for a quick single; Flintoff picked the ball up and threw it in one go to bring the stumps down at the striker’s end. Ponting waited nervously for the third-umpire’s call, who affirmed his worst fears. That was the breakthrough England were looking for on August 23, 2009, as Australia were now 217 for three, chasing a mammoth 546 to save the Ashes.

The Oval Test was Flintoff’s last as his fragile body could no longer take the rigours of the longer version. During the series, he was quoted as saying by the BBC:  “My body has told me it’s time to stop.” He wanted to leave in style, with a performance that would stun the old rivals. While his performances were nowhere close to his heroics of the dramatic Ashes 2005, he did invariably contribute in those crucial moments. At Lord’s in the second Test, his five-for sealed the deal in the fourth innings and in the next game at Edgbaston, his crucial fifty averted an England collapse in a rain-affected affair. The memories of the nightmarish tour Down Under in 2006-07 were still alive and Flintoff had his shot at redemption. The drama had ultimately moved to the fifth Test with the series tied at 1-1.

Having lost the previous Test at Headingley, England introduced Jonathan Trott to Test cricket and brought back the fit-again Flintoff for his final salvo. Australia were confident as they had the better of England for a major part of the series apart from the Lord’s Test. On Day One, England won the toss and elected to bat first. Ian Bell (72), Andrew Strauss (55) and the debutant Trott (41) made vital contributions to take England to 307 for eight. Early the next day, they were bowled out for 332. On a flat track at the Oval, the score may not have looked daunting and Australia set the ball rolling with a good opening stand. However, Stuart Broad and Graeme Swann demolished them and sparked a collapse which bowled them out for 160. Advantage England.

With a mammoth lead, England were jolted early when they lost quick wickets. But, it was Trott’s stage and his crucial 119 took them to 373. Australia now had to bat for a little over two days to chase down 546. While it was a mammoth task, nothing can be left to certainty in the game of cricket. England wanted to finish it off and Australia were hoping for history. Shane Watson and Simon Katich took Australia to 80 for no loss at the end of Day Three — setting a decent platform for the next. As the sun rose over London, the crowds thronged to The Oval, knowing that it was going to be the decisive day.

Andrew Strauss led his team on the park with the sun beating down on the square. Shane Watson and Simon Katich came out to resume their fight. Swann was given the ball early in the day and decided to come from around the wicket. Unable to judge the turn — rather one that came straight through — Katich padded at it and the umpire responded to England’s vociferous appeal. Swann jumped with joy as England had their first success.

In the next over, Broad had Watson plumb in front as he was locked on the backfoot to one that was a little fuller. At 90 for two, things were looking better for England. In the middle were Ponting and Michael Hussey and it was an important innings for them for varying reasons. Ponting did not want to lose his second Ashes in England as captain and was determined to avert that possibility. On the other hand, Hussey was almost playing for his place (if murmurs were to be believed) as he had been through a rare slump during the series. The English fast bowlers had troubled him with movement and had embarrassed him in the previous games.

The two stalwarts then started to calmly take control of proceedings. Showing grit combined with the occasional aggression, they gradually rebuilt Australia’s innings after the two shocks in the morning. Ponting was the more assertive of the two, and Hussey was playing himself in for a long vigil. They got to their fifty partnership of 94 balls and went into Lunch at 171 for two — still miles away from the target. After resumption, Ponting completed his fifty off 76 balls. They were looking more assured in the middle, although there were a few half-chances that went their way.

Ponting and Hussey took Australia past 200 and the captain was punishing anything that was marginally off-line. Hussey fought and battled — eventually getting to his half-century off 123 balls. Then came the moment of magic. With the score on 217, Hussey just pushed Steve Harmison to mid-on, where Flintoff was positioned. The burly all-rounder was dodged by injuries which anchored him for a major part. Little did Hussey imagine that Flintoff would have his one final moment in the sun. Ponting stretched to reach his crease, but Flintoff’s throw beat him easily and shattered the stumps. As the Australian skipper left the field, the crowd gave him a standing ovation, not knowing whether they would see him again in a Test match in England. This time, he couldn’t complain about a substitute or a certain Garry Pratt effecting his run-out. It was fair and square.

Australia now had to rework things. But, fate had other ideas. In the immediate over, Michael Clarke danced down the track to Swann and worked it towards mid-wicket. Strauss, at short-leg, stopped it and threw it onto the stumps as Clarke had fallen short. Two brilliant pieces of fielding had put England in firm control. Marcus North was the next batsman and he had given ample evidence of his talent during the series. At 236 for four, he tried to sweep Swann, but missed it completely. Prior collected it and just took off the bails as North had dragged his foot outside. Australia had now lost half their side. 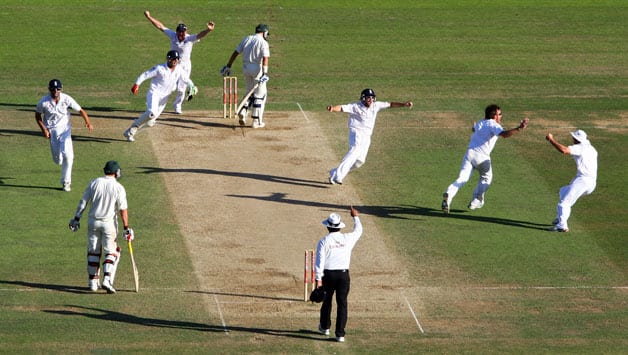 A delirious England team after last man Michael Hussey was given out on Day Four, which handed the hosts a 197-run win in the final Test © Getty Images

Brad Haddin joined Hussey and they were the last hope for Australia. In tandem, they stitched together a decent partnership that took them past 300. Haddin attacked the bowlers, while Hussey anchored the innings. After tea, Hussey got to his hundred with a brace through the off-side. It was a huge moment for him after a torrid run and certainly one that helped him regain his confidence. With that stroke, Australia got to 300. However, Haddin’s attacking instinct was soon to get the better of him. He danced down the track to Swann and tried to hit him over mid-wicket. It didn’t come off the bat and Strauss ran back a touch and safely pouched it as The Oval erupted. The 91-run stand had been broken.

Another former Ashes hero, Harmison, also made a contribution now. Mitchell Johnson flayed his bat at one outside the off-stump and it flew Collingwood at second slip. A few overs later, Peter Siddle got a top-edge which flew into Flintoff’s hands at mid-off. Stuart Clarke went the next ball as he edged one onto his pads that ballooned to the short-leg fielder. Harmison had three in quick time as England were only one wicket away from victory.

Hussey stood like a lone warrior and there was nothing he could do now. After playing out a few overs, he moved forward to defend Swann, but only got a deflection that went off the pads to short-leg. England were delirious. Hussey walked back with a resigned look. The whole crowd was celebrating as the players got into a huddle to mark their feat of conquering their rivals. All the tension and drama had boiled down to this. Australia were in a mini transition, but had been good. They were left to rue what might have been and couldn’t help but recall the first Test at Cardiff, where England’s last two men held on to deny them a victory. It could have easily been 2-2, Ponting must have thought, with the urn in the bag.

As the players gathered for the final presentation, Flintoff’s family joined him in the middle. The man who had been a hero in 2005, but a villain Down Under had finally taken his revenge. It was a perfect moment to walk away — an apt one at that — after beating Australia. For Strauss, it was the triumph he needed having taken over captaincy earlier in the year under difficult circumstances. An era may have ended with Flintoff’s retirement, but a new one had started for England.