Ashes 2009: Jonathan Trott marks his arrival with century on debut to win England the urn

Ashes 2009: Jonathan Trott marks his arrival with century on debut to win England the urn

On August 22, 2009, 28-year-old Jonathan Trott scored a century on debut for England in the second innings of the fifth and final Test match of the Ashes. Jaideep Vaidya tells the story of the historic day when an unknown Warwickshire batsman helped England win the Ashes in his first ever match. 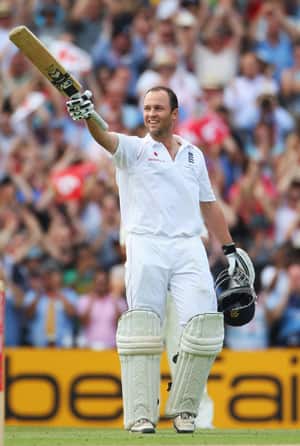 On August 22, 2009, 28-year-old Jonathan Trott scored a century on debut for England in the second innings of the fifth and final Test match of the Ashes. Jaideep Vaidya tells the story of the historic day when an unknown Warwickshire batsman helped England win the Ashes in his first ever match.

The deciding Test of an Ashes series is never the easiest to make your Test debut. A good show could give your fledgling career the proper impetus, whereas a flop show could provide a shattering false start. In the summer of 2009, such an occasion was put on a higher pedestal due to the fact that the team in which the debutant was playing for had been the second best overall in the series. The opposition, Australia, had scored most of the runs, had more individual centurions and bred the top three wicket takers of the series. Yet, the hosts, England, were on the threshold of regaining the Ashes after the 5-0 humiliation three winters ago in the land Down Under. They were also chasing the record of becoming the first England team since David Gower‘s in 1985 to win back-to-back home Ashes series. And thrust into the middle by the home team for the fifth and final Test at The Oval, with the series tied 1-1, was a certain 28-year-old debutant of South African origin who went by the name of Jonathan Trott.

Boasting of an impressive First-Class record for Western Provinces and, since 2002, Warwickshire, Trott had been drafted into the squad ahead of seasoned and experienced candidates like Mark Ramprakash and Robert Key, after Ravi Bopara was dropped due to poor form. It was a brave move by the selectors, one which they themselves weren’t sure of. Chief selector Geoff Miller even conceded that he was not sure if Trott had the temperament and technique, and whether he would be able to handle the pressure of playing in a decider. The top-order batsman’s record of averaging 80-plus in the championship that season was the only thing that firmly backed him up.

However, Dennis Amiss, who was the chief executive of Warwickshire in 2002 when coach Bob Woolmer roped in the 21-year-old from Western Provinces, was reassuring in his praise for Trott. “Jonathan won’t be overawed,” Amiss said ahead of Trott’s debut, as quoted by The Guardian. “He’s got plenty of confidence and he will give as good as he gets against the Aussies. If they try to ruffle him [assume there’s a fair chance of that], he’ll deal with it. He has a great determination to succeed and all the shots; the short ball doesn’t worry him and he has that selfish gene, which can be an asset to top batsmen.”

Trott’s debut, which was speculated in the media in the days leading up to the fifth Test, was officially confirmed on August 16. Amidst all the apprehension and excitement, depending on which side of the fence you were on, Trott was a distant observer to all the drama, probably with a chilled one in hand. “It’s a game of cricket, at the end of the day,” Trott casually told BBC radio. “I’ll try to keep it as simple as possible. Maybe when I was younger I used to get a bit uptight, but now I pretty much try to stay as relaxed as possible and let nature take its course.”

Trott was helped, although he would hardly admit it, by the fact that he shared the spotlight with Andrew Flintoff, the seasoned veteran of the England team who was playing his last Test match. The hero of the 2005 Ashes, Flintoff was far from his blistering form from four years ago, but that did not stop him from being the cynosure of all eyes in all five Tests. With The Oval Test being his last, the spectacle was even bigger.

Andrew Strauss won the toss and merrily put his side in to bat on a good pitch. The skipper made 55 at the top of the order and shared a century stand with Ian Bell (72). Trott came in at No 5, below Paul Collingwood (24) and looked good for the two hours that he was out in the middle, before some superb reflexes from Simon Katich at short leg resulted in the debutant being run out for 41 in his first innings. “A lot of players would have been happy with 40, but I was really upset because it was the most fun I’d ever had playing cricket — 35,000 people (actually 23,000) cheering every run,” said Trott.

England posted an on-par 332 on the board, before bowling Australia out for half their score on Day Two, thanks to Stuart Broad (five for 37) and Graeme Swann (four for 38). Australia fought back in the final session of the second day with Marcus North and Mitchell Johnson reducing England to 39 for three when Trott walked in for the second time to join his skipper. England were wobbling, albeit with a healthy lead of 211 at the time.

The duo survived till close of play and carried on the following morning, but not before Trott survived a close caught-behind call on the first ball of Day Three. It was an edgy start for the newcomer, with Peter Siddle bowling at his probing and aggressive best, but Trott managed to survive the first hour along with Strauss before marking the occasion with a boundary off a swivel and pull off North’s bowling.

Slowly, the drives through the off started flowing in as Trott helped take the game further away from Australia. He brought up his half-century with a couple of nonchalant backfoot on-drives off left-arm spinner Michael Clarke. The fifty had come off 89 balls and included five elegant boundaries. Any doubts over his temperament were slowly and patiently being dispatched away, like he did loose deliveries. Even after Strauss (75) departed at the stroke of lunch at 157 for four, Trott decided to lay anchor and batted wonderfully with the middle and lower order.

Matt Prior fell soon after Strauss’s wicket, before Flintoff came and went for a brisk 17-ball 22 in his final Test innings. But Trott did not lose his composure even a bit and was content with his role of watching the tailenders go for their shots while he shepherded them along. Trott made the audience forget that he was a debutant while he was out in the middle, and like a seasoned professional he calmly built partnerships with the lower order: 43 with Broad (29), 90 with Graeme Swann (63) and 40 with James Anderson (15 not out), as he inconspicuously approached the three-figure mark. On 97, he was given a reprieve after Ben Hilfenhaus’s short delivery deflected off his backfoot defence and almost rolled on to the stumps. The next ball, which was a wide and full delivery, Trott leaned out and guided the ball to deep point for a couple, before whipping the Australian pacer off his whips for two more down fine-leg to bring up his ton.

The 23,000-capacity crowd roared in unison as Trott — the 18th Englishman to score a hundred on Test debut, and first against Australia since Graham Thorpe 16 years ago — raised his bat to all parts of the ground. This was a gem of an innings from a man who was, till a couple of days ago, considered not temperate enough to handle the pressures of a crucial Ashes Test. A century, crafted out of 182 balls including nine delightful boundaries and strokeplay, had definitely changed their opinion. On 119, Trott was the ninth England wicket to fall with the score on 373, and Strauss immediately decided that was all and declared the innings, setting Australia a next-to-impossible target of 546.

Four years ago, another England batsman of South African origin, who had made his debut earlier in the series, had set the stage alight in the Oval Test with a breakthrough innings of 158 that helped his team seal the series. Trott did not get as many as Kevin Pietersen, but in the latter’s absence (due to injury) got enough to ensure that Australia fell well short of their target, thereby giving England their second consecutive 2-1 Ashes win at home.

It was a fairytale of sorts for Trott, who, growing up in South Africa, never in his wildest dreams thought that he would ever play in and for England, let alone score a century on debut in the Ashes. “I had no dreams of playing in the Ashes because I didn’t know it was possible,” he was to tell The Guardian in an interview. “I grew up in South Africa, so all I knew was green and gold and watching [Allan] Donald and [Gary] Kirsten and wanting to play for Western Province. I didn’t know there were other options.”

Thankfully, for Trott and for England, Woolmer reached out to his Western Province coach Eric Simons, who advised Trott to accept the offer to play for Lancashire. “I owe a lot to Eric,” said Trott. From that day, so did millions of English fans.