England lost the fourth Ashes 2013-14 Test against Australia by eight wickets to go 4-0 down.

England lost the fourth Ashes 2013-14 Test against Australia by eight wickets to go 4-0 down in the five-match series. After being in a strong position on Day Two, they lost momentum quickly on Day Three and succumbed to an embarrassing defeat at the MCG on December 29, 2013. Shrikant Shankar believes the England team has lost all confidence and area heading for a 5-0 Ashes whitewash.

When England came to Australia for the 2013-14 Ashes series, they were the bookmakers’ favourites. Although the 2013 Ashes was much closely contested between the two teams, England still managed to win 3-0. The bulk of that squad was maintained and everybody was in a winning camp. They played three tour matches and looked set to play against an unconvincing Australian side. England even dominated play on Day One of the first Test in Brisbane at The Gabba.

Everything seemed to go according to script till then. But things changed the very next day itself. England lost their way on Day Two and since then they have only truly had the better of Australia on Day Two of the fourth Test at the Melbourne Cricket Ground (MCG). Australia looked the hungrier of the two sides in Brisbane. England were bowled out for 136 and 179 in respective innings of the first Test. Hardly totals to win Test matches. They lost by a massive 381-run margin.

They then played another tour match before the second Test in Adelaide. Here their bowling completely failed and allowed Australia to score 570 runs. Then they were in the true essence of the term — blitzed by Mitchell Johnson. The left-arm fast bowler took seven wickets as England folded for 172. Australia then declared quickly and set a 531-run target. While England put up a better batting effort in the second innings, their 312 was way too short as they lost by 218 runs.

The third Test was probably the only match Australia would have been expected to win prior to the commencement of the series. Few would have expected them to be 2-0 up already. However, Australia did not disappoint and duly won the match by 150 runs. Perhaps, this was the best fight England had produced in the series. They were bowled out for 251 in the first innings. One of the few positives of the series — Ben Stokes, helped them to 353 in the second innings, but Johnson and co could not be kept away from victory.

If ardent England fans thought that this Australian side, which has not been in such dominant positions in the recent past, would let the foot off the accelerator, then they were wrong. England were bowled out for 255, but came back strongly to reduce Australia to 164 for nine. But Australia’s fighting spirit made sure that they added 40 runs for the 10th and last wicket between Brad Haddin and Nathan Lyon. Australia were bowled out for 204 and that too was an excellent achievement for England as they got a 51-run lead.

If other batting collapses were poor, England’s second innings was even worse. Captain Alastair Cook came out all guns blazing and raced to 51 off 63 balls with seven fours. Once he was dismissed by Johnson, things went completely haywire and a string of soft dismissals followed each other. From 86 for one, England saw themselves at 87 for four. Kevin Pietersen had two promising partnerships with Stokes and Jonny Bairstow, but both ended at the wrong time for England.

Then from 173 for five, England lost the last five wickets for a meager six runs in 40 deliveries, they were bowled out for 179. Australia chased down a tricky 231-run target with absolute ease and won by eight wickets. By the end of the fourth Test, it seemed like the life had been sucked out of the England players. They did not seem to be interested in playing anymore. Cook’s bowling decisions and changes defied belief. His field placements did not have any accordance with what the situation demanded. The Barmy Army singed loudly and cheered their team with a lot of life. But the players could not lift themselves to even giving Australia a decent fight.

With the current abject state at which the England team is in, it will not be surprising if they lose 5-0. They have lost by that same margin in the 2006-07 series, but that Australian team was arguably the greatest that graced any cricket field in history. This Australian team is in transition and does not have the caliber of the players from yesteryear, but they have been ruthless in the series. Whether England manage to avoid a 5-0 whitewash, the series will be remembered for a long time to come and it will not be easy to digest at all for the players and also fans. 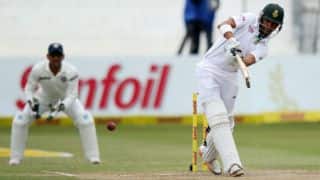