Kevin Pietersen has played many wonderful innings during his career. Two of his finest Test knocks have come at the Adelaide Oval. He returns to his happy hunting ground as England look to square the Ashes 2013-14 series after losing the first Test at Brisbane.

Kevin Pietersen has played many wonderful innings during his career. Two of his finest Test knocks have come at the Adelaide Oval. He returns to his happy hunting ground as England look to square the Ashes 2013-14 series after losing the first Test at Brisbane. Shrikant Shankar writes that Pietersen must rekindle his love affair with Adelaide and make it count for England.

It took 28 innings for Kevin Pietersen to move from 16 Test hundreds to 17. There were talks of him not having his head in the right place and not getting along with the then England captain Andrew Strauss. The 2009 Ashes series was a bit drab for him as he got injured after playing only two matches. England headed to Australia to retain the Ashes in 2010-11 and they needed their star players to fire if they had any chance to do so. The first Test was in Brisbane and England drew the game after being in a spot thanks to some splendid batting displays from captain Strauss, Alastair Cook and Jonathan Trott.

The second Test was at the Adelaide Oval and Cook impressed again with a fine century. Pietersen was in a different zone during that game and essayed one of his finest knocks. He only faced 308 balls to score 227 runs in England’s first and only innings of the Test. His innings included 33 fours and one six. Ricky Ponting and his side were knocked out and had no answer to Pietersen’s carnage. They lost by an innings and 71 runs. England took a 1-0 lead and went onto win the series 3-1.

Four years earlier i.e. in 2006, Pietersen scored 158 off 257 balls at the same ground. Although England lose that match dramatically, one can see the pattern for Pietersen at the Adelaide Oval. Now, just over three years after his double century, he returns to his happy hunting ground as England look to square the Ashes 2013-14 series in the second Test. It is imperative for England that they come away with a win at Adelaide due to the fact that the third Test is in Perth. The extra bounce that awaits them at the WACA will surely be a disadvantage as Mitchell Johnson has used the short-stuff well in the first game.

The only defeat England endured during the 2010-11 series was at the WACA and they were blown away by Johnson and his pace. He missed the Adelaide Test then and was brought back for the one in Perth. Now he seems as lethal as he has ever been and the curator at WACA is sure to prepare a pitch that will help Johnson. As it stands, even before the second Test, England would be under pressure at Perth. Hence it is important beyond belief that they pull off a win in Adelaide.

And here is where Pietersen comes in. His record at the Adelaide Oval is as good as any overseas batsman. There is something about the pitch that suits his style of batting. The bounce is not as much as the one seen at The Gabba. There will be a bit more help for the spinners and generally the ground is very good for batting. Scores in excess of 500 in the first innings are common. So, whether England bat first or second does not matter. They need to post a big total — as they did in 2010.

Pietersen did not look overtly uncomfortable against Johnson and Ryan Harris. Both his dismissals at Brisbane were self inflicted. That has always been the case in his career. There are not many weaknesses in his batting and he is very strong on the leg side. Pietersen does not employ the cut shot all that well, but he is a fantastic puller and a good player of the hook shot. He got out playing a help-you-along hook shot off Johnson.

Great players seldom make the same mistakes twice. Australia are sure to bounce Pietersen and test his resolve, but he is also sure to give it an all mighty whack this time around. Overall, England’s batting needs to improve. They have just been weakened by the unfortunate exit of Trott and that is why Pietersen of all the people needs to find that extra bit to make it count. Hardships and failures test the resolve of people and how they react and respond is important. England’s resolve and character will be tested again at Adelaide and so will Pietersen’s. 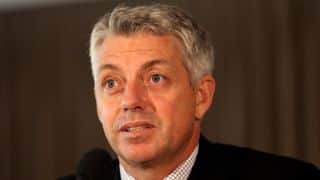