Ashes 2013-14: England's arrogance pulled them down

Ashes 2013-14: England's arrogance pulled them down

It was only Karma that England lost the Ashes, after urinating in the Oval last time round.

Australia thrashed England by 150 runs on Tuesday in the third Test of the series at Perth to win back The Ashes, after relinquishing the trophy in 2009 to their arch rivals. You will read plenty of opinions over the next few days on the reasons for this stunning reversal (given that England had just beaten Australia 3-0 in the home Ashes in August). But if you asked a yogi, a mystic rather than a cricketer to diagnose the problem, he would probably consider the defeat a sort of karmic retribution and point to the moment when members of the England team urinated on the Oval pitch .

For if there was one moment that summed up England’s hubris, it was that. There were others, mostly from the English press rather than the players themselves. Like comparing the English bowling unit to the West Indian quartet of the 1980s because, er, the English guys are very tall too! Or hailing James Anderson as the best pace bowler in the world, better than even Dale Steyn.  On and on it goes. But Oval-gate suggested for the first time that perhaps the team too had begun to believe their own publicity.

England painstakingly assured anyone who cared to listen that they were absolutely not taking Australia lightly. Well then, their best efforts fell so far short of matching Australia that to say they were not nearly good enough would be an even more damning indictment of their efforts. Mitchell Johnson mercilessly mocked English skipper Alastair Cook’s claims of not being intimidated by Australia’s invincibility at Brisbane… with the red cherry, that is. It was difficult to say what was more stunning, more shocking: his terrifying blast of chin music or England’s panicky response to it.  Brisbane set the tone for the rest of the series so emphatically that the Ashes returning to Australia before Christmas was not in doubt even before the conclusion of the second Test at Adelaide.

As the familiar collapses, the comical dropped chances and the pedestrian bowling (all once consigned to the 90s English archives) returned, it brought to mind the image of a team that had believed merely turning up on the field would suffice to win. At any rate, they were too tired to be bothered about putting up a fight.

Except on Day 5 of this Test.  Finally, and far too late in the series, England woke up to the task at hand and managed to delay the inevitable for a bit. From the ashes of another crushing defeat emerged a rising star, Ben Stokes. Stokes was originally chosen for his height (!) with the hope that he would also bat a bit. Instead, Stokes compiled the only English century thus far in the series and guided them to their highest total of the series on a crumbling, cratered Perth pitch. If Stokes could, why couldn’t Cook or Kevin Pietersen or Ian Bell is the question, though.

Sadly for England, they had chosen the most desolate juncture of the series to mount their strongest fightback. A highly respectable 353 on Day 5 was hardly enough to overcome a target of 504. Those were the runs their not so West Indies-like bowlers had likely begged to defend in the earlier innings when England collapsed thrice below 200 and once barely above 250.

As if to underline the hopelessness of the cause, a crippled Stuart Broad (victim of a Johnson toe crusher) limped out to bat on Day 5 with the match lost for all practical purposes. The day before, his bowling partner James Anderson had conceded 28 runs in an over to George Bailey, allowing Michael Clarke the luxury of an early declaration.

The victors had been vanquished. Pride had met its fall, as it usually does. Nearly four months to the day that England had poured their holy water over the pitch, they have been brought down to their knees and their places in the side, once assured beyond question, are now in doubt. Ashes 2013-14, apart from having thus far offered a dramatic and brutal variety of cricket, is also a worthwhile exhibit to study how and why empires rise and fall or why the history-makers become history.  It is hard to sympathise with this arrogant English unit and hard not to believe that they have only got their just desserts.

(Madan Mohan is a 28-year-old chartered accountant from Mumbai.  The writing bug bit him when he was 8 and to date, he has not been cured of it.  He loves music, cricket, tennis and cinema and writing on cricket is like the icing on the cake.  He also writes a blog if he is not feeling too lazy at http://rothrocks.wordpress.com/) 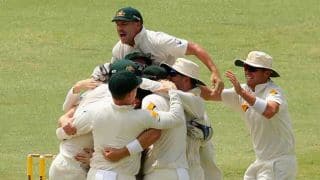