England have been outperformed and outplayed by Australia in the Ashes series.

England have been outperformed and outplayed by Australia in the first two Test matches of the Ashes 2013-14 series. Hence, they trail by a 2-0 margin. In all three departments of the game; batting, bowling and fielding, they have been below par. The one area where they were supposed to be better was the spin department, but they have been mediocre so far. Graeme Swann has been ineffective and has been \ overshadowed by Australia’s Nathan Lyon. Shrikant Shankar believes Swann’s poor form is costing England way too much.

Australia’s bowling led by Mitchell Johnson and England’s collective batting failures have been the main focus after the first two Tests in the 2013-14 Ashes series. Johnson has taken 17 wickets out of a possible 40 England wickets. He has been the standout player of the series so far. In fact, only six times has an England batsman scored a half-century in four innings.

On the other hand, Australia’s batsmen have delivered the goods, while England’s bowlers have not been able to perform collectively. Australian batsmen have already essayed four centuries and eight half-centuries  From England’s perspective, only Stuart Broad has been regular among the wickets. In fact, he is the second highest wicket-taker in the series after Johnson. James Anderson has had a poor series till now. But the most worrying thing for England is the form of Graeme Swann.

The off-spinner has been a shadow of his former self. He has bowled 98 overs and only taken four wickets. He has gone wicket-less twice in four innings. He has been outperformed by Australian counterpart – Nathan Lyon. It is not that Lyon has taken too many wickets — he has six to his name in 75 overs in two matches. But Swann has been the best spinner in the world for the last three-four years and in all conditions. He is considered world-class. Lyon is a useful bowler, but not considered to be in the same class.

It seemed like Australia countered Swann by having more right-handed batsmen in their side. Chris Rogers and David Warner are the only two top-order batsmen who are left-handed. Down the order, there is Johnson. But Swann has not been effective against any of them. He has not had the zip in his bowling that has made him a world-renowned bowler. While he has got some turn off the tracks, he has not generated much bounce — key for any spinner.

Monty Panesar was drafted into the side for the second Test, as the pitch at the Adelaide Oval is more conducive for spin. But Swann and Panesar together got only four wickets in the whole match. Panesar is just coming back after a troubled time in his personal life. It might take a while for him to find his feet. But Swann’s near no-show has cost England a lot. They had Australia right where they wanted them in the first innings of the first Test in Brisbane at The Gabba at 132 for six. Swann was supposed to run through the lower-order and tail, but that didn’t happen. Ever since, he has been ineffective.

The WACA ground in Perth is historically a hotbed for fast bowlers and  the third Test almost feels like a must-win game for England. The England think-tank has to act fast and get their selections absolutely right. Swann has not contributed much with the bat — something he has always been good at. So, will England leave him out and bring in Steven Finn — their fastest bowler, to fight fire with fire, so to speak? They don’t have much time to decide as the third Test starts on December 13.

Either Swann needs to be dropped or he needs to improve big time if England are to have any impact in the series. Otherwise, when the series heads to the Melbourne Cricket Ground (MCG), the score will read 3-0 in favour of Australia. 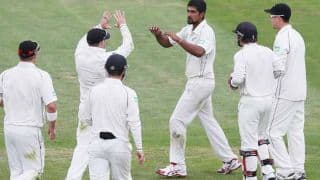