Andy Flower has to resign as there have been many disappointments in the recent past.

“That Spidercam again is absolutely in our line of vision. I’m going to say it… I wasn’t going to, I went in and asked Channel Nine yesterday (Saturday) to move it. I got an absolute filthy four-letter outburst from the man next door. ‘Don’t you tell me where to put our cameras.’ And it’s sitting right there again…”

I walked out feeling rather chastened actually. I went back in and said, “Can you explain yourself?” In comes Anderson, bowls, and that’s outside the off stump and, er, left alone. No…it was out..disgu…disgusting.

“Well, I like…you’ve read the weather well. You’ve got a winter woolly on….”

And thus Michael Vaughan on Monday, essaying one of his great traits as a co-commentator, led Jonathan Agnew out of an awkward conversational cul-de-sac , but not before the Test Match Special (TMS) linchpin’s visual woes had summed up the difference of approach and outcomes in the series whose fourth encounter was playing out, obscured, in front of him: The tentative, polite Englishman cowed by the bullying Australian, technically savvy and superior and perfectly willing to pulverise with pejoratives.

Test Match Special hasn’t really changed in the years I’ve been listening to it. Geoff Boycott still groans at a rash shot like a rhino with piles being robbed of her firstborn. Vic Marks remains an impish interpreter of the game and English language with an eyebrow so arch it could be hewn of triumphant marble. Jonathan Agnew continues largely untroubled by modernity’s disturbances, only very occasionally allowing Alan Partridge bluster to swirl onto the amiable, erudite village green from where his commentary is broadcast regardless of where in the world England are playing.

Continuity is fine for TMS, but it plainly no longer is for England. Because those days have largely been alien since he took over as coach, Andy Flower may well have allowed himself a wry sigh at the irony of away supporters harking back to their generally woeful 1990s for omens and solace ahead of Australia’s run chase on Sunday, and specifically to Dean Headley’s Melbourne Cricket Ground (MCG) wonder spell 15 years ago. Flower’s history trumping time in charge, however, now just seems inadequate. Having an entire strategy supposedly based on stability and conservatism simply isn’t tenable when the cumulative disappointment of results against Pakistan, South Africa and now Australia have incrementally been complemented by off field farces, knee-jerk selections and inexplicable on field decision making. My personal charge sheet to go with the many others:

Fields being pushed back time and time again at the first sign of a Australian lower order counterattack regardless of how often — both home and away — Brad Haddin took advantage of Alastair Cook‘s premature neuroses; Tim Bresnan, always Flower’s default option, being brought back when England were already in disaster’s waiting room — the cricketing equivalent of grasping a comfort blanket as an earthquake strikes; mutiny and cliques being allowed to fester and explode — it matters not whether you blamed Kevin Pietersen, Protean PR tricks or witless Twitter parody accounts run by Stuart Broad’s mate; practice sessions becoming publicly viewable wounds, allegedly commented upon by journalists (who played through eras markedly less professional) for their laxity and slipshod nature; a vast backroom team dedicated to physical and mental nirvana, yet players retiring or returning home broken and exhausted; Prior dropped two matches after he’d actually shown signs of a renaissance with the bat; Steve Finn being turned from world beater to a knee-obsessed crisis on legs; the utter blandness of players’ comments to the press —Pietersen apart — which conveyed, surely inaccurately, a near North Korean dead-eyed belief in the sanctity of the status quo.

There are grander, more complex issues besides. In the last couple of years, Matt Prior and Pietersen have both pushed for the players to be allowed to play more dollar T20 and be granted more rest. They were largely mocked for the apparent, money-grubbing paradox, but franchise frenzy has undoubtedly contributed to both Johnson and Warner becoming the rabid, frothy-mouthed match-winners we’ve seen this series. Johnson’s doted on IPL stint — everyone likes to be appreciated — was the catalyst for his confident performances in Australia’s Indian One-Day International (ODI) series which must surely have been the displays which convinced Lehmann — although he wasn’t there — that his Barmy Army-maligned maverick was ready to once more be unleashed in Tests. Warner himself was once dismissed as just a slugger beloved by unrefined T20 crowds whose technical flaws would be exposed in the longer forms. Many in the English game would currently guffawingly say the same about the increasingly Big Bashing Alex Hales, but he’s presently the only English opener in Australia playing with anything resembling uninhibited self-expression. You might think drawing this comparison is pointless, but to argue that the lines between cricket’s three disciplines are not increasingly blurred is like suggesting Robin Thicke needs more scantily clad women in his videos. England and the English have yet to quite embrace and understand the mucky yet irresistible convergence.

The England and Wales Cricket Board (ECB) need to utilise their inner Spidercam and look down objectively on England’s performances since winning the Pataudi Trophy at home in 2011. When they do, they will see an increasingly dilapidated fortress whose wall cracks have been papered over, the away India series apart, by postcards of either mediocre opposition or individual brilliance such as Prior in Auckland or Ian Bell throughout the summer Ashes. If you watched Andy Flower play cricket or watched Andy Flower face down Robert Mugabe ahead of the 2003 World Cup or just have watched Andy Flower speaking in his understated, dignified manner even in the midst of this present circus, you have to pause, as chastened as Agnew, before suggesting he steps aside from doing anything. But England’s cracks have gradually turned into WACA pitch-level Grand Canyons and a beleaguered Flower has turned into Thelma and Louise. Like them, he should accept the game is up, throw himself over cricket’s precipice and enjoy the sweet relief of release as a still appreciative and grateful English audience celebrates his time at the wheel. 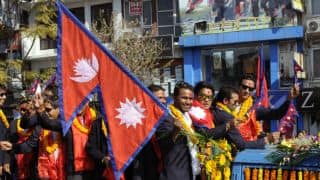